Watch out, it's behind you!

The Plus team's vehicle of choice is the bicycle, so we're intrigued by an announcement that hit the news this month: a clever car mirror that eliminates the dreaded blind spot has been given a patent in the US. The mirror was designed by the mathematician Andrew Hicks, of Drexel University, after years of puzzling over the problem.

A typical flat wing mirror on a car gives you a field of view that is only 15 to 20 degrees wide. That's a lot less than the 120 degrees you get when you look at a scene directly, rather than through a mirror. And it means that when you're driving a car there's a region behind you, the blind spot, that you can't see, not even by using both the rear-view and the wing mirrors together. And if there's a cyclist or another car lurking in this blind spot, a simple manoeuvre can end in disaster. 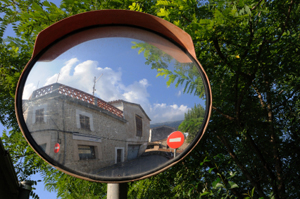 A convex mirror gives you a wider field of view but comes with a lot of distortion.

One obvious way around this problem is to use a convex mirror, one that bulges outwards and therefore gives you a wider view of the world behind you. The trouble is that convex mirrors distort straight lines and make it difficult to judge distances. You can see this in the convex mirrors that are sometimes put up at road junctions with bad visibility, to allow you to see if someone is coming down the other road.

Hicks' mirror is also a convex surface and it's made out of a continuous piece of glass. The difference is that it's curved in a non-uniform way. "Imagine that the mirror's surface is made of many smaller mirrors turned to different angles, like a disco ball," he explains. Hicks devised a computer algorithm that, after tens of thousands of calculations, tells you exactly how each of the little faces should be tilted. "The algorithm is a set of calculations to manipulate the direction of each face of the metaphorical disco ball so that each ray of light bouncing off the mirror shows the driver a wide, but not-too-distorted, picture of the scene behind."

The result is a 45-degree field of view with minimal distortion: 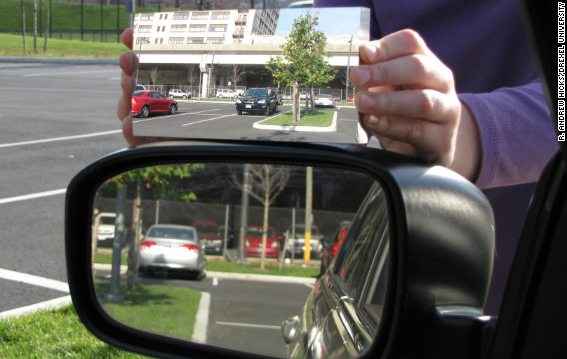 The downside is that objects in the mirror appear further away than they do in an ordinary flat mirror: since you're fitting more objects into the same amount of space, they have to appear smaller. For that reason current US regulations require cars to roll off the assembly line with flat driver wing mirrors. But Hicks is hoping that he can still sell his mirrors as safety accessories that can be fixed on the car after you've bought it, or in some European and Asian countries where curved mirrors are legal. So is seeing more, but with distorted distance, safer than seeing less with accurate distance? That's something that should probably be tested — but hopefully not in real-life traffic!

It has always been possible

Permalink Submitted by Anonymous on July 12, 2012

This is hard to explain--and somewhat hard to get accustomed to--but easy to experiment with. And you can draw some pictures to convince yourself that it works. The best way to test the adjustment is to drive down the center lane of a three-lane freeway and watch cars in the mirrors approaching from the rear. The approaching cars are always visible in at least one--and usually two--of the three mirrors.

Permalink Submitted by Anonymous on August 17, 2012

A reasonable and explainable technique is to lean left (right in UK) until your head touches the window, and adjust the driver's side mirror till you just see the side of the car. Then lean right (left) about the same and adjust the other mirror to give the complementary view.

The blind spot comes in FRONT

Permalink Submitted by Anonymous on August 17, 2012

The blind spot comes in FRONT of the field of view given by the side mirrors. You can't see the car when it's too far forward to see in your side mirrors but not far enough forward to see with your eyes. Take a look at the third picture down at . Yes, you can adjust your mirrors to minimize your blind spot, but you still need to turn your head to see the cars, motorcycles, bicycles, etc. next to you.