What is a universe?

The word "universe" means everything there is: all of space and all of time. This begs the question of how there can be more than one Universe. Surely every other universe is also part of all there is and therefore belongs to the Universe? We'll return to this question in a second. 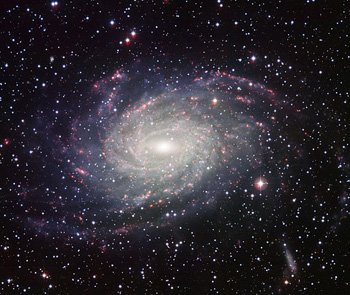 A picture of the nearby galaxy NGC 6744. Image: European Southern Observatory.

First let's have a look at what we think of as "our" Universe. Scientists believe that it started in the Big Bang around 13.8 billion years ago. Back then, the Universe was incredibly hot and dense. As it cooled down from the Big Bang, matter started to form and eventually clumped up into the planets, stars and galaxies we see today.

We can't see all of the Universe because it takes light from distant galaxies or stars some time to travel through space. Some of that light simply hasn't had the time to reach us yet. The observable Universe consists of all the regions of the Universe from which light could have travelled to us since the Big Bang. That's the part of the Universe we could see in principle if we had perfect instruments for detecting that light.

What lies beyond the edge of the observable Universe? And what happened before the Big Bang? The answer is that nobody really knows. It might well be that the Universe existed before the Big Bang, perhaps it was contracting, rather than expanding, back then. Neither do we know the overall shape of the Universe. It could be that the Universe is infinite in extent, but it could also be finite. The latter wouldn't mean that the Universe has an edge that you could fall over — this would be weird because if there was an edge, then there would be something beyond that edge and surely that would also be part of the Universe. But it's possible to be finite in extent without having an edge. Think of a surface of a sphere: it has finite area (you can paint it with a finite amount of paint), but you never fall over an edge as you walk around on it.

So what do we mean by "other" universes? There are two main ideas that we have explored in articles on Plus. One is that of the multiverse. For various reasons it makes sense to contemplate the possibility that the Universe is made up of different regions, which are isolated from each other and may be governed by different laws of physics. Our Universe is just one of the regions, growing like a bubble in a bubble bath. You can find out more about this possibility in What happened before the Big Bang and Bang, crunch, freeze and the multiverse.

The other idea is that of parallel universes and is inspired by the theory of quantum mechanics. Loosely speaking, the theory suggests that things can be in two or more states at once: an electron can be in several places simultaneously, for example, and a radioactive atom can be both decayed and non-decayed at the same time. The question is, why don't we ever see this superposition in real life?

One possible answer is that, whenever a system in superposition is observed by a person, or perhaps a measuring instrument, the world splits into several branches. In each branch the system is in exactly one of the states that were previously existing simultaneously. Each branch contains all of reality and so can be loosely thought of as a universe of its own. This is pretty mind-bending: you can find out more in Are there parallel universes?.

For more on both parallel Universes and the multiverse, see the How many universes are there? package.

Changing Nature of the Universe

Permalink Submitted by Anonymous on January 5, 2016

The Universe after the Big Bang was presumably finite and bounded, in that after the Dark Ages, a beam of light would in principle keep going around in a spiral of ever increasing circles in curved space-time but never ‘escape’, due to the very high mass density. The Universe (or more correctly space-time) has been expanding at an ever increasing rate due to the influence of its Dark Energy. Also, recent measurement of space-time curvature on an incredibly large Galactic scale have revealed that it is flat. This implies that at some stage a transition has occurred with the Universe suddenly becoming infinite and unbounded.