Maths in a minute: Why do mathematicians play games?

The easy answer is "for fun", just like the rest of us. It's obvious that being good at maths can help you in many difficult games, such as chess. But there is another reason too. Mathematicians are interested in games because they can help us understand why we humans (and other animals) behave as we do. A whole area of mathematics, called game theory, has been developed to cast some light on our behaviour, especially the way we make decisions. 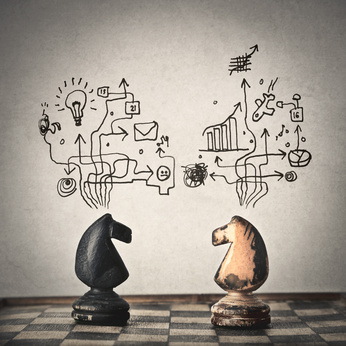 Not just fun and games.

As an example, think of the cold war. After WWII the USA and the Soviet Union gradually built up arsenals of nuclear weapons, each to defend itself against each other. By the end of this arms race the weapons they had amassed were powerful enough to wipe out most life on the planet. That was a ridiculous situation to be in. Neither nation could actually use their weapons, as that would have ended life as we know it for everyone. Yet neither nation dared to get rid of their weapons for fear of the other taking advantage. And the consequences of a nuclear accident didn't bear thinking about. How did the (presumably intelligent) leaders of both countries end up in such a mess, having the whole world teetering on the brink of extinction?

To throw some light on this question let's imagine that you and I are playing a game. I am the president of the USA and you are the president of the Soviet Union. We each have a choice between two moves: produce more nuclear weapons or do nothing (here doing nothing is also a "move"). We have to make our moves at the same time without knowing what the other one is doing, just like in rock, paper, scissors.

If I produce more weapons and you don't, then I win (because I end up stronger than you): I get three points and you get zero points. If you produce more and I don't, then you win, getting the three points while I get zero points. If we both produce more weapons then it's a draw and we both get one point. If we both do nothing it's a draw again, but now both of us get two points — this draw gets more points than the previous one because it's nicer to live in a world with less weapons, and we are being rewarded for not producing more.

Therefore, if we both think along the same reasonable and selfish lines, this game will end with an increased arsenal on both sides, giving one point to each of us. Yet, we would both have been better off had we both decided not to produce more weapons: in that case we would have got two points each. It's a strange paradox. Our best moves don't lead us to the best outcome.

In a real arms race people don't receive points for their moves, of course, but you can think of the points as a scale that indicates how much they like an outcome (three points for the outcome they like most and zero for the one they like least). Then, if politicians act rationally and in the interest of their own countries, they appear to have no choice but to keep increasing their arsenal.

Our arms race game is actually very famous in game theory. It's called the prisoner's dilemma because it is usually phrased in terms of two prisoners who have the choice of cooperating with each other or giving each other away to the police. One obvious objection is that real life is far more complicated than the game suggests. People have the ability to negotiate, they may be able to somehow find out what the other party is about to do, and they can also be far-sighted enough to break the impeding spiral towards doom. But mimicking complicated situations using simple mathematical games does throw some light on them.

And that's exactly what game theory does. It tries to capture a situation by a game with clearly defined rules. Mathematicians then investigate what strategies there are, and how rational players who are after their own gain are likely to behave. Mathematicians have used this approach to understand the economy, which is all about people interacting to increase their money, but it has also been used in psychology, for example to understand how people develop different character traits, and in biology to explain the behaviour of animals and other organisms.

Of course, if you feel that a particular game is too simple, you can always make it more realistic by making it more complicated. For example, if two people play the prisoner dilemma game repeatedly and in each round remember how the opponent behaved in the past, then their best strategy may be to trust the other player (rather than producing more arms in our example). In that way people have tried to explain why we humans, and other animals too, have evolved an ability, even an urge, to be nice to others even if it doesn't come with an immediate gain (see this article for more). So the cold eye of mathematics can even explain warm and fuzzy things as human niceness!

You can find out more about game theory and its many applications in these Plus articles.

Read more about...
game theory
creativity
Maths in a minute
Tweets by plusmathsorg