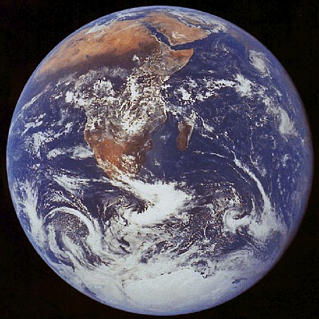 More than a century ago, an American astronomer named Seth Carlo Chandler discovered that, as the earth spun on its axis, it also wobbled. This wobble, now known as the Chandler wobble in honour of its discoverer, didn't disappear over time, as would have been expected if no further force reactivated it. The source of the continuing activating force has remained a mystery ever since - until now. This year, scientists at NASA's Jet Propulsion Laboratory announced that they know why the world still wobbles.

The main culprit, say the scientists, is changing pressure at the bottom of the oceans. The mass of the oceans is shifting constantly, due to changes in temperature, salinity, and wind patterns. These movements mean that the pattern of pressure on the Earth's crust is constantly changing, and this variation is the major factor causing the wobble. A small part (less than one-third) of the wobble can be attributed to changes in atmospheric pressure.

In the past it has been suggested that the wobble was caused by the seasonal movement of water from the southern to the northern hemisphere, or large earthquakes which jolted the Earth as it spun around its axis.

Richard S. Gross of NASA's Jet Propulsion Laboratory determined his results by applying numerical models of the oceans, which were only recently made possible by the results of other researchers. These results were made widely available via the Paris-based International Earth Rotation Service, which was created in 1988. This sort of sharing of results enables interdisciplinary research, and leads to results that might otherwise never have been discovered.

So what exactly is the Chandler wobble?

About 1765, Leonhard Euler, who was studying the dynamics of rotating fluid bodies, predicted that the Earth might wobble slightly about its axis of rotation. However, such a slight wobble would be very difficult to detect, and would require accurate observations and considerable calculation. So, perhaps unsurprisingly, although several astronomers attempted to observe this predicted wobble over the following century, all failed.

You may wonder why astronomers hope to see the wobble, since it is the sky they study, rather than the earth. The reason is that as the earth turns on its axis every twenty-four hours, it appears to us on the ground that the sky turns above us. The stars also appear to shift in the sky as the seasons change, due to the circuit the Earth makes around the sun each year. By making very accurate observations of the night sky, and the position and elevation above the horizon of stars, astronomers could hope to see if there were changes in the position of stars not explained by either of these two factors. They could then see if such changes represented evidence for the wobble Euler had predicted.

In 1884 and 1885, Chandler made careful observations of the night sky, using an instrument he invented himself for the purpose, which he named the almucantar. Performing feats of manual computation that seem prodigious to us in this computer age, he managed to find evidence of a wobble with a fourteen-month cycle. We can further appreciate the accuracy needed in his observations when we realise that the wobble he discovered caused the Pole to move about 6 metres from where it should be!

More than a century passed before Chandler proved Euler's prediction correct, and it has taken a further century for scientists to be fairly certain that they have pinpointed the cause of Chandler's Wobble. The recent advances would not have been possible without the growth of the computing power needed to create complex numerical models, and the extraordinarily accurate astronomical observations made possible by Very Long Baseline Interferometry (VLBI).