Yesterday's refusal by the UK government to posthumously pardon Alan Turing makes sad news for maths, computer science and the fight against discrimination. 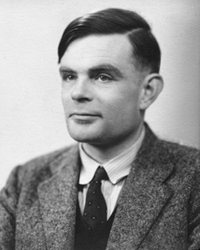 But even if symbolic gestures are, symbolically, being rebuffed, at least Turing's most important legacy — the scientific one — is going stronger than ever. An example is this week's announcement by scientists at the Scripps Research Institute in California and the Technion-Israel Institute of Technology of their development of a biological computer, based on an idea first described by Turing in the 1930s.

We think of computers as electronic devices, but in essence a computer is just any machine that can take an input, manipulate it according to some specific rules, and return an output. "In contrast to electronic computers, there are computing machines in which all four components [input, output, hardware and software] are nothing but molecules," says Ehud Keinan of the Scripps Research Institute, who led the research. "For example, all biological systems and even entire living organisms are such computers. Every one of us is a biomolecular computer, a machine in which all four components are molecules that 'talk' to one another logically."

The biological computer devised by Keinan's team is made of molecules which can effect chemical change in one another. It consists of a solution containing DNA molecules, DNA enzymes, which drive chemical reactions, and a molecule called adenosine triphosphate, which can transport chemical energy - it provides the computer's power.

When a molecule is given as input it undergoes chemical change according to a pre-determined set of rules that depend on the make-up of the solution. "The molecules start interacting upon one another, and we step back and watch what happens," says Keinan. The output is another molecule with specific properties: the result of the computation process. Programming the software in this computer amounts to fiddling with the exact composition of the solution in terms of DNA molecules and enzymes.

Conceptually, the biological device is based on the mother of all computers, the Turing machine, first described in 1936 by Alan Turing. The input of this theoretical machine (there were no real computers at that time) is a ticker tape printed with a string of symbols which the machine can read (a bit like the string of letters that encodes DNA). When it reaches a symbol, the machine replaces it with something else, moves on to the next symbol, or back to the one before, according to a set of rules which themselves depend on the symbol it's just encountered. As it marches through the symbols it transforms the tape, thus producing an output. (This is an informal description — see this Plus article for an example and the Stanford Encyclopedia of Philosophy for more detail.)

The biological computer was given the logos of the Scripps Research Institute and the Technion-Israel Institute of Technology encrypted on DNA chips as input, and it managed successfully to decrypt them.

It sounds simple, but it turns out that a Turing machine can carry out any logical algorithm you care to throw at it, and that's why it plays such an important role in computer science. "Our device is based on the model of a finite state automaton, which is a simplified version of the Turing machine," says Keinan. To test their device, his team have encrypted images on DNA chips (these are microarrays of many very short DNA sequences) and programmed their computer to decrypt them, which it did successfully.

But how do biological computers compare to electronic ones? Each step in the chemical computations is actually slower than what can be achieved by the flow of electrons, but in compensation DNA chips can store masses of information. When a chip is input in the machine, lots and lots of computations are happening in parallel and that provides speed. "Considering the fact that current [DNA] microarray technology allows for printing millions of pixels on a single chip, the numbers of possible images that can be encrypted on such chips is astronomically large," says Keinan.

What's more, biological computers have the potential to interact with biological systems and even living organisms. "No interface is required since all components of molecular computers, including hardware, software, input, and output, are molecules that interact in solutions along a cascade of programmable chemical events," says Keinan. But whatever the future for these biological devices, it's amazing that Turing's machine, which started out as a purely mathematical concept, now exists, almost literally, in the flesh.

The research behind the biological computer has been published in the journal Angewandte Chemie.