Bracing for the storm 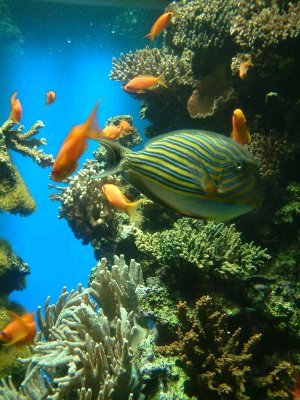 Coral reefs with their immense bio-diversity are one of the most precious assets of our planet. Unfortunately, they are also extremely vulnerable. With the uncertainties of climate change ahead, it is important to understand how coral reefs will react to changes in their environment and to find ways of preserving them.

One change that almost certainly lies ahead, due to climate change, are storms of increased intensity and frequency. A new study by a team from ARC Centre of Excellence of Coral Reef studies at James Cook University in Australia uses a mathematical model borrowed from engineering to predict the damage likely to be inflicted on coral reefs by violent storms and tsunamis, and to calculate the probability that a reef will be ripped off the sea bed.

"The mathematics we used in the paper [which appeared in the journal Nature] is called cantilever beam theory," says Sean Connolly, who co-authored the study together with Joshua Madin. "Basically, we use the same sort of equations that would be used by an engineer trying to work out how much force to apply to a lever to lift something. The main difference in our case is that the 'lever', is the coral colony, and the force is not applied at the end of the lever, but by the water rushing by, pushing on the colony over its entire surface area. If the force is stronger than the attachment of the colony to the reef, then the attachment breaks and the coral is knocked over.

"[The most vulnerable] colonies are those that have a small area of attachment (which reduces the force needed to dislodge the colony), relative to the amount of colony surface area up high off the reef (which increases the levering effect). This is why table or tree-like colonies are so much more vulnerable than mounds."

This tallies with what researchers already knew from experience, but the model goes far beyond the common sense understanding that scientists have developed over decades of studying coral reefs. It takes account of a range of important factors, including the shape of the colony, the strength of the underlying sea bed and the force exerted by water sweeping over the reef. Reefs come in a huge number of shapes and sizes, but the researchers have developed a way of representing all of these on a single scale, which measures their susceptibility to damage from rough seas. The scale allows researchers to read off which colonies are likely to become dislodged from the sea bed under the pressure of a storm or tsunami of a given strength. 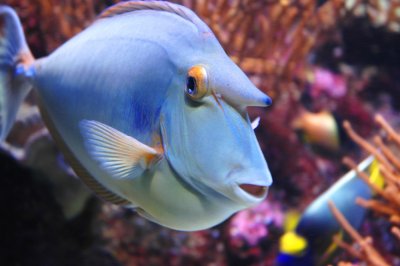 If more frequent violent storms were the only effect of climate change, then the coral reefs would probably be quite safe, after all they evolved to live in rough oceans. However, there are other factors that impact on the reefs and their habitat: greenhouse gases drive up ocean acidity, over-fishing can wipe out species that are essential to a reef's eco-balance, and prolonged heat waves can toxify the corals' cells. Together, these factors weaken the corals and make them more vulnerable to storms and tsunamis. "To predict how coral reefs will look under different future scenarios, and to plan accordingly, we needed to know exactly how wave forces impact who lives and who dies on the reef," says Connolly, "These new models provide us with that essential tool."

The study is also interesting from another view point: it epitomises a change in the role of maths in ecology. "Historically, ecologists have focused on processes that operate over very small scales," says Connolly, "like the effect of the presence of a predator on a prey's behaviour or mortality. These questions can be answered by manipulating a system (for instance by removing the predator), and observing the effects." Statistical methods can then be used to analyse the results of such an experiment, in the same way as in medical studies where drug trials on a small group of people are used to assess the drug's effects.

"Increasingly, though, we are interested in the large-scale consequences of ecological processes. For instance, if a predator is removed from an entire seascape (for instance, it is fished out), how will this affect the dynamics of the remaining species over the next several decades? Experimental manipulations on such large scales are typically neither feasible nor ethical, and often we need an answer in a hurry, precisely because we want to know if things will have adverse consequences in time to stop them from coming to pass." 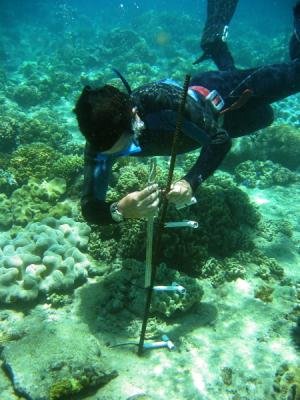 Joshua Madin setting up instruments to measure the impact of waves. Image courtesy of James Cook University and the ARC Centre of Excellence.

Ecosystems are complex and dynamic and so mathematical models designed for other dynamical systems, arising in economics, engineering or particle physics for example, lend themselves to be applied here. Checking whether a model accurately predicts the dynamical processes within an ecosystem requires a sounder understanding of mathematics than researchers in this area traditionally have.

As Connolly explains, "The standard approaches to analysing data in ecology, which are largely borrowed from medicine where carefully controlled studies are the norm, are just not useful. We need ways to confront our tailor-made mathematical models with the available data, in order to make judgements about how much we can trust the output of our models. Doing this requires a good knowledge of both biology, which tells you what needs to be in your models, and mathematics, which is the language used to formulate our models."

If Connolly is right, then rigorous and sophisticated maths may soon be an established part of ecology — diving masks may yet become a standard part of a mathematician's tool kit.