The beauty of maths was given a unique opportunity to shine last weekend, as the London Institute of Education played host to Bridges 2006, a conference celebrating mathematical connections in music and art. Over two hundred delegates, some mathematicians, some artists and some both, came together to witness more than a hundred presentations and a visual arts exhibition, and — probably most importantly — to talk and exchange ideas. 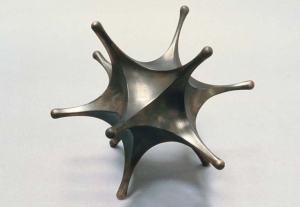 Non-Spin Return, a sculpture by Simon Thomas based on the idea of a collapsing universe.

That maths and art overlap is an idea that many people, especially regular Plus readers, will be familiar with. Mathematical structures abound in art and music and — as any mathematician will tell you — maths can be as beautiful as any piece of art and doing it requires a unique kind of creativity. But opportunities to explore the connections between art and maths in practice are few and far between. The Bridges conference aims to fill this gap and to allow the two subjects to cross-fertilise by giving artists and mathematicians the rare chance to interact and learn from each other.

The collaborative spirit of Bridges was reflected in the wide variety of backgrounds of this year's speakers. There were artists with no academic maths training that were brought around to maths as the language of patterns and forms, mathematicians without artistic backgrounds that are intrigued by the inherent beauty of their work, and people from pretty much every point on the sliding scale between these two extremes, including those that actively work in both fields. 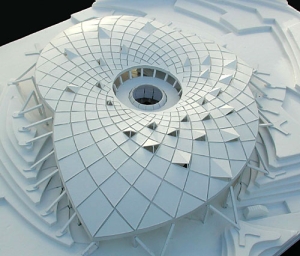 A model of the new educational building for the Eden Project, designed by Joylon Brewis of Grimshaw Architects in collaboration with Peter Randall-Page. It consists of a central hollow trunk and a roof structure reminiscent of a tree canopy. The central trunk houses a giant seed. The spiralling pattern of the roof is based on the Fibonacci sequence.

As the delegates' backgrounds vary widely, so does the nature of the overlaps between art and maths. Some artists are inspired by nature and found their way to maths as the language of natural forms. This is the case for the sculptors Simon Thomas, whose work is inspired by everything from the patterns of ice formation on puddles to concepts of infinity and the possible shapes of the universe, and Peter Randall-Page, who is involved in designing a new educational building for the Eden Project in Cornwall. The new building is designed to be like a tree housing a giant sculpture representing a seed at its core. The spiral patterns involved in the design are based on the Fibonacci sequence, which, remarkably, turned out not only to be the most aesthetically pleasing but also the most practically viable solution — nature and its mathematical forms are not only beautiful but also maximally efficient. 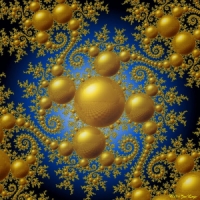 A fractal image based on a Kleinian group, created by Jos Leys. Image © Jos Leys.

But beauty can also come out of pure maths. As a Professor of Mathematics at the University of Warwick, Caroline Series studies mathematical objects called Kleinian groups. Her work involves understanding the reflections, translations and rotations, not of ordinary Euclidean space, but of hyperbolic space (see Plus article Strange geometries). While the Euclidean symmetries give rise to a finite amount of patterns on the plane — mathematicians have classified them into 17 wallpaper patterns — those of hyperbolic space create infinitely many, breathtakingly beautiful fractals. Her presentation brought the slightly scary maths behind these fractals down to a digestible level and will no doubt give computer graphics artists some welcome tools for experimentation. 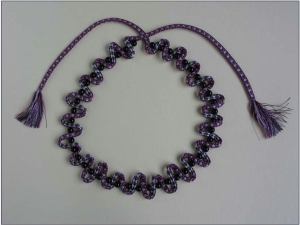 Other delegates explained how maths is essential as an artist's tool. Braid maker Jacqui Carey uses it as a language: it's the only method, short of trial and error, that can take a braiding pattern — a theoretical recipe for interlacing threads — and tell you what the finished product — an intricate cord used to make jewellery and art — will look like. Architects Brady Peters and Xavier DeKestellier, who work on Norman Foster's Specialist Modelling Group, use mathematical techniques to model everything from a building's appearance to its acoustic and aerodynamic properties. And, slightly more off-the-wall, mathematician Gary R Greenfield uses methods from evolutionary computation to get virtual ants guided by virtual pheromones to produce paintings by depositing colour on a virtual canvas. 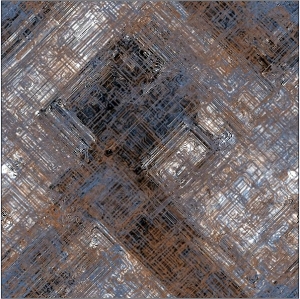 These few examples show that the overlaps of maths and art can provide fertile ground for development. But this is not the only reason to explore them: they also provide excellent teaching tools, especially for maths teachers. The conference picked up on this with a series of teachers' workshops and the Bridges Family day, a free event open to the public and of particular interest to young people. Part of the day was a celebration of the 25th anniversary of the founding of the Mathematics Masterclasses run by the Royal Institution of Great Britain throughout the UK. The connections between maths and art have been a popular theme in the masterclasses, and the very first series of these was established by Sir Christopher Zeeman following on from his successful Christmas lecture in 1978 on the mathematics of perspective.

Sir Christopher was on hand at the family day to give a taste of this masterclass, which is still popular with students today. He explained the artistic rules of perspectives developed by Bruneschelli in 1420, and showed how they were finally mathematically proved over 200 years later. Other masterclasses on the day included Colin Wright's impressive juggling skills and how his mathematical descriptions of juggling techniques led him to discover completely new tricks never performed before. Meanwhile, Christopher Budd's masterclass explored the mathematics in African art and Celtic knots, and Alan Davies explained the bizarre creations of Anamorphic Art.

The masterclasses are an opportunity to get your hands on the maths; following the professional's lead you are encouraged to explore and make discoveries for yourself. And this is not only a more exciting way to learn mathematics, it is often more successful as well — as Colin Wright said: "Show me and I will see, let me experience and I will learn." The exploration continued in the afternoon with a host of activities on offer, including mathematical origami and beautiful sculptures from folded circles (otherwise known as paper plates!).

The Bridges conference series was brought into life by the mathematician Reza Sarhangi and has been taking place annually since 1998 in various locations throughout the world. It has been gathering momentum ever since, with this year's London event, expertly organised by Phillip Kent and John Sharp from the London Knowledge Lab, being the largest Bridges conference so far. As juggler-mathematician Colin Wright put it: "It is the connections between things that lead to the greatest advances."