Can maths help improve the communities of the future?

Across the country and around the world, most of us want the same things for our communities. These include good jobs that make people want to stay and attract newcomers, inviting town and city centres that meet local needs and attract outsiders, and effective systems to alleviate poverty and prevent homelessness. Local councils draw on many different experts to help them do this, such as town planners, health professionals and economists. And now it's the turn of mathematicians to see how they can help improve the communities of the future.

Mathematicians came together with policy makers in a virtual study group in January as part of the Virtual Forum for Knowledge Exchange in the Mathematical Sciences (V-KEMS), supported by the Newton Gateway to Mathematics and the Isaac Newton Institute. At the event representatives from Luton Borough Council and City of Edinburgh Council presented challenges that affect their local communities. Then, for the next three days, the assembled mathematicians focussed on these to see how mathematics can help, and what next steps are needed to enable policy makers to use these tools.

Fergus McLardy, from Luton Borough Council, explained some of the unique opportunities and challenges for his community. One of these is the plan for Luton Airport, which is owned by the Council, to almost double its capacity to 32 million passengers a year. How can the council ensure the development benefits the local community, particularly in creating quality employment for the local people, while working within their environmental plans to reach net zero for carbon by 2040?

One way of approaching such a complex challenge is to use something called utility theory. The utility of a particular strategy is the relative value the strategy will have for the people and organisations (known as agents) involved. Passengers are clearly one of the agents that will be affected by changes to the airport. Positive impacts of any strategy on passengers could include reducing their time at the airport or the cost of the flights, and negative impacts might be long border control queues, lack of airport facilities and shopping. The airport itself is also considered an agent, with rental income and increased passenger time at the airport some of the possible positive impacts, and resident concerns or lack of suitable staff some of the negative impacts. And there are of course other agents, such as EasyJet (the biggest airline using the airport), local businesses and transport providers getting people to and from the airport.

You can see this approach by using utility tables to judge the economic, jobs and environmental benefit to each agent for various scenarios being considered. For example the council’s target is to minimise CO2 emissions by 2040 through a combination of approaches including replacing fossil fuel powered equipment and vehicles with electric alternatives, generating clean energy on site and making existing buildings more energy efficient. The utility table below shows the notional benefit for each agent when applying this net zero approach to the airport expansion: a broadly positive benefit gets a score of 1, a broadly negative benefit a score of -1, and no real impact a score of 0.

The overall utility can then be calculated by adding together the utilities for the different agents, weighted by what priority the different agents should have. In the utility table above all the agents have been judged of equal priority. But it might be more realistic for policy purposes to consider Luton Council as the highest priority agent (with a weight of, say, 8), followed by the airport (weight of 7), the passengers (6), EasyJet (5) and local vendors and travel providers both considered having the lowest priority (with equal weight of 4).

This may seem like a simple approach but using utility theory to assess the impact of strategic decisions can be extremely powerful. The process requires decision makers prying apart complex scenarios and identifying who will be impacted and how. They have to think through how a scenario will be implemented which may suggest positive changes or highlight potential problems. And the utility calculations give a notional way to compare the different values of complex decisions. (You can read more about utility theory in our brief introduction.)

Anna Hamilton, from the City of Edinburgh Council, explained there are many things that a local authority (LA) can do to address homelessness. These include providing temporary accommodation, ideally near schools or local support networks, and supporting people into settled accommodation as quickly as possible. But the most important thing that local authorities can do is to prevent homelessness in the first place.

In order to do that, it is vital to understand how people become homeless in the first place. Known pathways to homelessness include leaving prison, care or the armed services, and r loss of employment leading to missing rent payments. If people who find themselves on one of these pathways can be identified in time, then early interventions could prevent them becoming homeless. Hamilton asked whether mathematical modelling can help in this context: can it predict the likely impact of any legislative changes, highlight which existing activities the Council could enhance, or suggest new ways in which homelessness can be prevented? 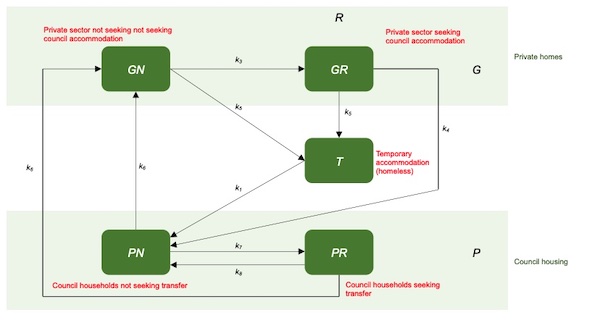 The proposed dynamical system model of how households can change (taken from the VSG report).

In response to this challenge the mathematicians, among other things, sketched out a model that could be used to investigate the impact of early interventions on preventing homelessness. They mapped how people flow between different housing states: for example, people may start off being secure in private rental accommodation, but their situation may change to them seeking council accomodation. The resulting system can be described mathematically using ordinary differential equations that describe the flow between these states. (You can read more in our brief introduction to differential equations.)

With the conceptual model in place, the next step is to find the data that allows the parameters (such as the transfer rates between states) to be specified. Then such a model could be used to assess the impact of early interventions on the system, as well as predicting the impact to the Council of potential legislative changes. (You can see an example of how this sort of model is used in practice in the very different setting of epidemiology, in The mathematics of diseases.) "The hope is that this will support vulnerable people, and the model could give more insight once it's correctly parameterised," said mathematician Ann Smith, from Huddersfield University. "When we can get hold of data in a manageable form, we can predict long term and secondary impacts in policies, and refine the flow models." Analysis could suggest where to concentrate the Council's efforts, to test possible scenarios and evaluate current interventions.

Working with communities into the future

"This has been a real pleasure," said McLardy during the feedback session on the final day. "There's some fabulous points that have come across, which I'm comfortable I can take into the future." McLardy invited the contributing mathematicians on a field trip to Luton and a workshop to take things forward.

The draft report on the event has recently been published, and work continues. This virtual study group is just one of many that have taken place over the pandemic, as part of the RAMP Continuity Network. The work produced by the mathematicians in collaboration with the partners posing the challenges is a great illustration of how virtual study groups, and hopefully soon in-person study groups, can work. The problems presented are not necessarily solved completely in these few days, but they give the partners, such as these council leaders, an insight into the sometimes surprising ways mathematics can help them, and the next steps required to actually use these methods in their work.

The virtual study group, Post Covid-19 Recovery - Communities of the Future, was held in January as part of the Virtual Forum for Knowledge Exchange in the Mathematical Sciences (V-KEMS), supported by the Newton Gateway to Mathematics, the Isaac Newton Institute, the International Centre for Mathematical Sciences and the KTN.