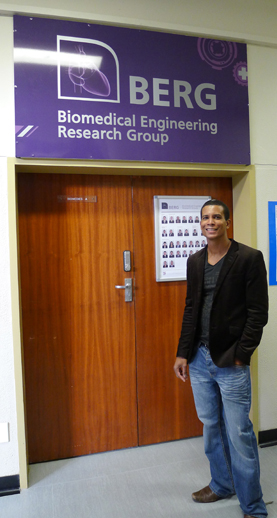 Kiran Dellimore at the door of the Biomedical Engineering Research Group at the University of Stellenbosch.

Africa isn't a continent that's famous for cutting edge research. But at the University of Stellenbosch, 50km East of Cape Town, South Africa, Kiran Dellimore and his team are engineering medical equipment that will save the lives of people all over the world. Latest projects include replacement heart valves made from kangaroo tissue and equipment to help resuscitate people in emergencies.

Plus met Kiran at a conference in South Africa, which brought home to us just how important science will be in solving the continent's many problems — from massive health challenges like HIV/AIDS to climate change. But the science that's made in developed countries often stays there because it's expensive. "The stuff we're doing here is pretty state-of-the-art, but we're doing it much cheaper than they can do it in the US or Europe," says Kiran. "Because in Africa things have to be affordable if you're going to treat people. Cost is an underlying theme in everything we do. And in the course of [trying to make things cheaper] you innovate, you develop new things and new ideas come into play. That really shows that Africa has something to teach to the first world."

Kiran himself doesn't come from the continent but from the Caribbean island of Barbados. And his initial career choice wasn't biomedical engineering but rocket science. He had specialised in science early on at school and with A levels in maths, further maths, physics, chemistry and a scholarship in his bag, he headed for the US to study. A first degree in chemistry turned out not to be his thing — "quantum chemistry nearly killed me" — so he did a second degree in mechanical engineering. After that he decided to specialise in aerospace engineering. "Ever since I was a kid I had really liked airplanes and flying and stuff like that, so I thought 'why not'? I went to do a Masters and then a PhD in aerospace engineering at the University of Maryland. I concentrated on propulsion systems in rocket engines and my minor was in helicopter aerodynamics."

The switch to South Africa and to biomedical engineering was the result of a whim, inspired by a childhood dream. "Ever since I saw the first free and fair elections in South Africa in 1994 — the story of Nelson Mandela — I had a dream of coming to South Africa. When I was graduating from my PhD I couldn't find a job in the US and I was worried about the future, the economy was in a bad place. So one night at 2am I decided to Google for postdoctoral opportunities in South Africa. I wrote to two professors and they both responded very quickly, so suddenly I was coming here. It took me 15 years to [fulfill my dream] and no one believed that I would, but in the end I made it!"

It seems like a huge leap, from rocket engines to human bodies, but the questions that come up in both areas of engineering can be similar, and so are the mathematical techniques used to solve them. "My PhD was all about numerical and mathematical modelling to simulate the flow of film coolant, which protects from hot gas flow, through a rocket engine combustor," explains Kiran. The flow of liquids and gases is described by the Navier-Stokes equations, which have been around since the nineteenth century. The trouble is that these equations are incredibly difficult to solve — in fact, no one even knows if a physically meaningful solution exists in the most general setting. That's one of the biggest open questions in maths.

However, in real-life applications solutions do exist and though you can't write them down as a general formula, you can approximate them using a technique called computational fluid dynamics (CFD), which simulates fluid flows. "I did lots of CFD in my PhD. They brought me here to South Africa to do more simulations like that, to model fluid flow through an artificial heart valve, but really as a postdoc you end up doing everything." (See here for more on CFD.)

And Kiran doesn't regret switching continents, disciplines and techniques. "My career path has been very non-linear, I haven't really followed one route and I didn't even know I was going to end up here," he says. "But in every new situation you adapt and you learn. The important thing is that you're doing something interesting, exciting and something you enjoy."

At the moment Kiran is excited about kangaroo tissue. Back at the lab he showed me an artificial heart valve made using tissue from kangaroo hearts, which will eventually be used in humans. "They kill kangaroos in Australia because there are too many of them," he assures me. "We have a collaboration with a professor there, and like that we get tissue from the sack that surrounds a kangaroo's heart." 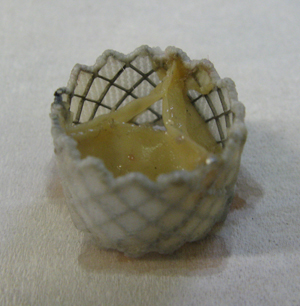 The artificial heart valve made from kangaroo tissue and the stent.

Africa has a high incidence of rheumatic fever, which can lead to a narrowing of the aortic valve. "You'll get a drop in blood pressure, your heart has to work a lot harder to pump blood out, there's turbulence in your heart where it shouldn't be." In Europe these kinds of problems usually occur in older people as a result of wear and tear but in Africa it affects younger people too. And all these people would benefit from new, and affordable, heart valves.

The tissue goes onto an ingenious stent, designed by Kiran's team. The stent crimps down to a very small diameter. "We squeeze it down to a very small size and we then use a clever way of deploying it in the body. You crimp the valve onto a little balloon which is tiny enough to fit into an artery. When you're in the correct position you blow up the balloon [to expand the stent]. You then deflate the balloon and retract it, and the heart valve is in position."

The valve has already been implanted into a sheep, aptly named Dolly, who is alive and well on a farm near Cape Town. "Our next step is to do a much bigger trial of the valve, to test the properties of the tissue inside the heart to see how long it's going to last." Part of this process is a huge machine designed for fatigue testing the valves. "It simulates the flow through the left ventricle of the heart. It's meant to show the resistance your heart feels when it's pumping blood through all the arteries and veins in your body."

The machine operates at a much higher rate than the human heart, at 210 beats per minute rather than 72. "We need to fatigue test the valves for 200 million opening and closing cycles [to comply with ISO standards]. We're not quite there yet, partly because the machine keeps breaking down — it's so complicated." To tweak the design of the machine Kiran's team use a mathematical model that is normally used to describe electric circuits. "You can model certain components as resistors or capacitors. There is a differential equation we solve to find the range of values (of, say, resistance felt by the heart) we can expect from the machine. So we can see if the machine is going to produce reasonable values." 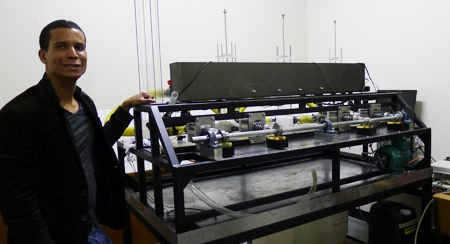 Kiran and the machine used for fatigue testing the valves.

But heart valves aren't all. Another project Kiran is working on is about cardiopulmonary resuscitation (CPR): that's the chest pumping used on someone in cardiac arrest to restart the heart and breathing. Health organisations recommend that a person's chest should be compressed at least 100 times a minute and that's very hard work. Rescuers get tired very quickly. And there's another problem too. "When you're doing CPR not all of the energy and work is actually going into compressing the chest," says Kiran. "It's going into compressing the back support surface as well, for example the mattress in a hospital bed."

There is a second order differential equation whose solution will tell you how deeply the chest will get compressed depending on the compression force, the stiffness and damping of the patient's chest and the back support surface. "I did an optimisation of this equation to find the range of back support stiffness that would allow you to achieve the chest compression depth that's recommended by the guidelines," says Kiran.

Kiran also realised that a change of the equation would lead to a new mathematical model which gives more insight into the physics behind chest compression. His research has shown that the recommended rate could be lowered slightly, which would make rescuers' work a lot easier. The work so far has been on CPR on adults but Kiran and his team are now adapting it to apply to newborn babies too. "I have decided to focus my work on [newborns] because I have identified a need for new diagnostic and interventional tools and strategies tailored to meet the unique physiological and anatomical needs of infants." There are several pieces of new technology in the pipeline to help rescuers with their work but they are still secret because patents are pending.

The impact his work has on people's lives is an aspect that aerospace engineering could not offer. "I really like the idea of giving back to society and in aerospace that was a little harder to do. Now I can make an impact relatively quickly and do things that save lives. That's very rewarding."

Back to the US

Despite his enthusiasm for his work Kiran is planning to go back to the US. In terms of racial equality the situation in South Africa is not quite as rosy as he had hoped and there have been disappointments. "It's been a bittersweet experience. But overall I've learned a lot and I'm very grateful that I had the opportunity to come here. And my boss, Professor Cornie Scheffer, has been phenomenal. He's very supportive, but he lets me do my thing and when I come up with a new idea he listens."

But leaving the country does not mean leaving South African research in the lurch. "One of the challenges for African researchers is getting funding, for example from US agencies. They need to have connections with US researchers and I think there are not enough connections so that funding can be shared. So me going to America would help foster international collaboration and keep on funding this great research that we're doing here."

In the long term Kiran may even combine biology with aerospace engineering. He's interested in bio-inspired flight: looking at the amazing aeronautical abilities of flying animals and learning from them. "Nature is amazing and we can learn from that. It's a very active research area and it has caught my interest. I try to look at myself as somebody who can try anything — I want to be able to give anything a go."

Marianne Freiberger is co-editor of Plus. She interviewed Kiran Dellimore in Stellenbosch in November 2011. If you would like to find out more about Kiran's work, visit the Biomedical Engineering Research Group website.