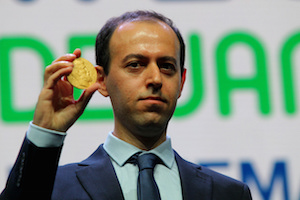 We have some very good news to report from the International Congress of Mathematicians (ICM) in Rio de Janeiro today, as Caucher Birkar has been presented with a new Fields medal.

Birkar originally received the medal in the opening ceremony of the Congress on Wednesday morning. The Fields medals, one of the most important prizes in mathematics, are awarded to up to four mathematicians every four years at the ICM. The medals are given to mathematicians aged 40 and under, recognising outstanding work and promise of future achievement.

When Birker was given the new medal, he explained that immediately after the original ceremony many people came up to congratulate him. And as he stood someone stole his briefcase, containing the medal, from the chair directly behind him. The Brazilian organisers of the conference, and the International Mathematics Union which awards the Fields medals, have gone to great lengths to help local police find the thief, and of course, to replace Birkar's medal, which was awarded in a brief but moving ceremony at the ICM today.

Birkar was awarded the Fields medal for his contributions to algebraic geometry – the area of mathematics that uses equations to understand geometric objects. As more complicated equations (or sets of equations) are used to describe these objects, and as the equations are allowed to be defined over different types of numbers, these ideas give rise to the notion of algebraic varieties. Mathematicians have been trying to get a handle on the infinite zoo of algebraic varieties that arise in this way by classifying them according to certain similarities. Birkar has made great progress in a particular method of classification that holds out great promise for relating all algebraic varieties to simpler, easier to understand, examples. (You can read more about Birkar's work here.) 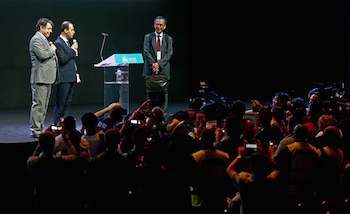 There were also unexpected positive outcomes as a result of the theft of his medal, Birkar said. "This has been widely covered in the media, and I am now more famous! And the number of people who know what a Fields medal is is way more than it was last week."

"In the beginning it was a shock, it happened so fast," Birkar said. "But very soon I recovered. In the grand scheme of things this is a really really small thing. I have seen much worse things in my life, and if I was discouraged by such small things I wouldn’t be here today."

Originally from Kurdistan, now living in the UK after being accepted as a refugee, Birkar explained the importance of the award to his home. "The Kurdish people are very happy, and in the region, in Iran, Iraq and Turkey. This is a positive thing and I hope it will inspire people, that they can succeed."

Birkar grew up in a city on the border between Iran and Iraq during the war: "My city is right on the border. You can imagine we were an easy target. The threat was always everywhere." He explained how he went on to become one of today's greatest mathematicians: "There are a few reasons. It as to do with the way of life of the region. When I was born in my village life was traditional – we produced everything we needed. The other reason is that Kurdish culture has been conditioned for difficulties by its history." And the final reason for Birkar's success was family: "When I was 10,11,12 my brother helped me a lot to learn mathematics. Family helps enormously – directing, not pushing."

And what helped Birkar carry on during his career, moving far from home to a new life in the UK? "At some point I realised that learning maths is another way of enjoying life. That's why I never stopped."