Classroom activity: the game of life 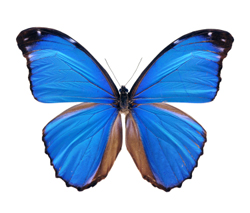 One of the amazing things about life is its sheer complexity. How can a bunch of mindless cells combine to form something as complex as the human brain, or as delicate, beautiful and highly organised as the patterns on a butterfly's wing? Is there any hope of ever describing the processes involved and improving our understanding of living organisms?

Well, so far no-one has cracked the secret of life completely, but mathematics gives some interesting insights. One of them is that complexity can arise from some very simple rules. In this activity we'll look at a famous illustration of this fact, the game of life, which was invented by the mathematician John Conway in 1970. It's not a game in the usual sense because there's only one player. All you do is set the scene and watch the game evolve.

This applet was created by Alan Hensel.

The game is played on a chequerboard (click on the button on the right to open the grid). Initially, some of the squares contain an "organism" and some don't (by clicking on the squares you can choose which ones contain the blue organisms). Each square has eight neighbours, one on top, one below, one left, one right and four at the corners. At the next step, new organisms are born, die or survive according to the following simple rules:

Clicking "Go" after you've chosen your populated squares shows how the system evolves under the rules — have a go and watch the patterns evolve! By changing the value of "zoom" you can change the size of the grid and using the drop-down menu you can decide whether to see the system evolve over all generations ("forever") or just one generation at a time. You can also change the speed at which the evolution is shown.

Here are some questions to ponder:

(See here for some answers.)

And here are some interesting initial patterns to play with:

Conway's game of life shows that even very simple rules can produce a large variety of different behaviours, including highly organised and very complex ones. What's amazing is this wasn't what Conway set out to show when he designed the game — what he was really after was an infinitely programmable computer. Find out more in our interview with Conway.

Ive been using this for years ...from 6th form to yr 7
The main point I like to make is that maths does not have to have an immediate purpose...and that there are interesting patterns just 'out there'...they may one day have a use and purpose but if they don't, does it mean we shouldnt study them [too much of teaching today panders to the 'why do we need to know this?' question]..anyway my final qu is often : does a glider exist? (we see it, but it is just the result of some simple rules)

these are some awsome cells create more please