Shining a light on solar energy

Plants are amazingly good at something that is still flummoxing us humans in our quest for sustainable energy sources: turning sunlight into energy in an efficient way. Around 100 billion tons of biomass are produced annually through photosynthesis. The question is, how exactly do plants do it? 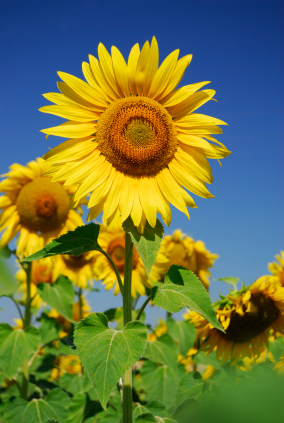 Photosynthesis produces a 100 billion tons of biomass a year.

At the annual AAAS meeting in Vancouver Greg Scholes from the University of Toronto introduced the results of an experiment that, quite literally, sheds light on this question. And it suggests that quantum effects, strange physical phenomena we don't usually detect in ordinary life, may play a role in biological processes.

The problem Scholes and his team addressed is how to construct a map — a "circuit diagram" — which shows just how energy from the Sun moves through the molecules that make up plant proteins until it reaches the reaction centre, where the actual photosynthesis process begins.

"Each molecule in a protein has a signature we can pick up," explains Scholes. "It's the energy, or colour, at which it absorbs light." The idea behind the new experiment is to shine light at a sample of a plant, in this case a kind of algae called cryptophyte, and to see how molecules corresponding to different colours react. It's a bit like striking a tuning fork and seeing which molecules resonate.

In their experiment Scholes and his team used ultra short laser pulses as their light source. They contain a broad spectrum of colours and, because they come in short blasts, give rise to precise measurements rather than a swamp of blurred information. It is then possible to watch how molecules corresponding to different colours are excited. "[The light] can excite the green molecule and we can watch what happens to [the signature of that molecule]. If it diminishes with time, then the excitation has moved away from the green molecule. But we might see a corresponding rise in the signature of the blue molecule." This represents the flow of the energy through the protein.

More importantly, using laser pulses the researchers were able to create a fragile quantum state in the system, known as superposition. Generally such states are believed to be destroyed too rapidly to make a difference to natural processes. We understand them only in terms of the mathematics that describes them, and they are usually only observed in tightly controlled laboratory experiments. But in this case the state survives long enough to have an effect: it allows the energy to sweep through the molecular system akin to a wave, being shared by two molecules at a time, rather than hopping from molecule to molecule as would usually be expected.

Exactly what the advantage of this wave-like behaviour of energy should be, if indeed there is one, is not yet clear. Scholes believes that it might help make the energy harvesting process more robust. "Biology must be robust: imagine you damage one molecule in the chain, you wouldn't want that to completely blow out the whole system."

More generally, if it turns out that quantum effects really do play a useful role in biology, then this will mean that quantum physics is no longer confined to the weird and largely theoretical world of the very small and very fast. Scholes hopes that more work on cryptophyte will provide an answer. So the humble algae may not only teach us how to harvest solar energy efficiently, it may also advance a new scientific field: quantum biology.

Re: Shining a light on solar energy - quantum photosynthesis

Permalink Submitted by Anonymous on February 22, 2012

Just finished reading the Feb 18 post. Quite good, and thanks for providing the link to Greg Scholes page at the U of Toronto. There is a misconception among many who think about photons to only think about them as discrete particles when in fact they also behave like waves, or as some like to call them, wave-packets. Photons fall into the Boson family of phenomena rather than the Fermion family. This is important because Bosons love to cooperate and hangout together at pubs drinking and singing together, while Fermions are at home alone maybe watching some football on the telie, or so physicist Wolfgang Pauli likened. And it's a useful analogy to get a grasp of what's happening away down in quantum land. This allows photons to pile out of the pub through one preferred vibratory door no matter whether there is just one door or 15, so long as they all have the same energy resonance features in the antennae proteins that make use of their energy. This IS where superposition enters into the picture. In effect what we are talking about here is a true quantum computing circuit, the very thing that computing engineers are trying to figure out all over the world just now! What surprised me was the fact that the new Quantum Computing centre going into Waterloo doesn't even have a quantum biology unit as part of its research team effort. I guess the QC geeks must be Fermions. P. LeMay, Vancouver