Why are we surprised when a magician correctly guesses cards picked from a deck, as in the trick shown in the video? Is it really that difficult to perform such a trick, or could it just be down to chance?

The answer is most probably not, as the probabilities are vanishingly small. In this article we will do the basic calculations and we'll also show that whenever you shuffle a deck of cards you make history: chances are you produce an order of cards that has never ever occurred before in the whole, long history of the Universe.

If you choose a card at random, there are 52 possibilities for what you might get. So, if a magician were to simply guess what card you have picked, there would be a chance of only 1/52 they guess it correctly, or a little less than 2%. That means that if a fake magician repeats the same guessing trick around 100 times, they would be expected to guess correctly only twice. The audience would be quite frustrated by the other attempts!

so guessing two cards correctly is a much more impressive trick.

This is the multiplication principle: the probability of two independent events (guessing two cards correctly) is the product of the two individual probabilities.

Similarly, the probability of correctly guessing three cards in a row, as in the video, is:

Is it the first time ever in history that the cards are displayed in this exact order? 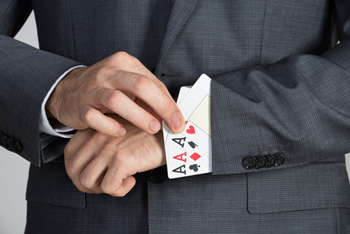 Unfortunately, there is no way that you could guarantee the answer. However, chances are that you are holding a never-ever-made sequence. Pretty amazing, huh? How can we say this?

First, consider the same technique we used to calculate how many three-card combinations there are. There are 52 cards to fill in a sequence of 52 spots for cards. There are 52 possibilities for the first spot, 51 for the second (once the first spot is filled), and so on. Hence the total number is:

If we were to write this number out in full, it would have 68 digits.

This is an incredibly small probability. To show just how small it is, let's make our own metaphor. According to the Big Bang theory, the whole Universe was created about 13.7 billion years ago. Also, as of right now, population of Earth is 7.5 billion people.

Now imagine a parallel world with 10 billion people who all live forever. Give one deck of cards to each person (it doesn't matter if the person is a newborn or elderly) and ask them to shuffle once per second for the next 14 billion years. Also, consider that each year is a leap year (366 days). Further, assume that for every shuffle a completely new sequence of cards is created. How many new combinations would be created in this process?

So what about our card trick above? Well, it is a trick of course, and not just chance. To find out how it works, see the video:

Ricardo Teixeira is a mathematician at the University of Houston-Victoria. He has been actively working in developing rigorous mathematical explanations for magic tricks and other recreational activities. So far, he has published and worked in relating advanced topics such as probability, the theory of cyclic groups, linear algebra, coding theory, algorithms for data transmission, and more, with magic tricks. To this date, over 2,000 students have witnessed him perform and explain his "mathemagics" tricks.

Gisele Teixeira is a second grader and gifted and talented student at Dudley Elementary. She has appeared in several YouTube videos performing mathematical magic tricks and explaining college algebra material. She has also helped her father explain logarithms and matrices to college students.

"population of Earth is 7.5 million people" should be "billion" :)

"This gives a total of 52 x 51 x 50 possible three-card combinations, which means that the probability of picking one of them is

Thank you for pointing out

Thank you for pointing out the error! We've corrected it.

In the section on "Counting Combinations" you have this:

When it should be this:

Likewise, thanks for spotting

Likewise, thanks for spotting the typo!

I correctly guessed 3 cards in a row that my friend was holding. Nothing more than seeing the card in my mind. No trickery involved. I've practiced this alone by picking up random cards that were face down.

It is impossible to practice this because it is down to probability. You got lucky once, that's it. I can almost guarantee you wont do that on your following attempt.