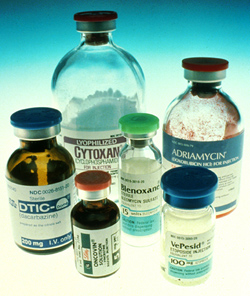 A tumour initially starts when a DNA failure leads to uncontrolled division of a cell, with the growing tumour absorbing nutrients and expelling waste through its surface. However the requirements of a tumour depends on its volume —that is, its width to the power of three — while the amount that can be transported through its surface depends on surface area — that is, its width squared. So once the tumour grows over a certain size these requirements can no longer be met, leading some tumours to become a more dangerous, invasive form of cancer. Cells on the surface of the tumour release chemicals to degrade surrounding tissue to encourage movement of cancer cells, and securing a blood supply to the tumour.

Mathematics is already used to study tumour growth, the pre-invasive stage is fairly well modelled mathematically. In contrast, Chaplain and his team want to create a complete model of a tumour. Such a model will have to operate on many levels: on the subcellular (such as gene expression and cell division); the cellular (such as the location and interactions of cells); and the macrosopic level (such as the transport of nutrients and changes to surrounding tissue). The aim of the project is to produce a virtual cancer — a mathematical model that can be used to design treatments for individual patients.

"One of the big challenges in addressing cancer treatment is that you can have two patients with the same kind of tumour in the same area of the body, but they will react to it completely differently," said Chaplain. "The factors which contribute to the creation and growth of cancerous cells can all be measured — most biological processes in the human body involve many different but interconnected phenomena to which mathematical values can be applied."

Such a virtual cancer would be a hybrid of two types of mathematical models. The discrete part of the model would examine each cancer cell as a free particle in space, interacting with other cells and the local environment. For each of the tumour cells at a particular time, the model would include information on its position, its rate of cell division (which changes either due to an internal genetic messages, or from external growth factors released as the surrounding tissue degrades), and its movement (affected by chemical stimulus, adhesive attraction to nearby cancer cells, and proximity to empty space).

Chaplain said: "By using cutting-edge applied and computational mathematical techniques to track the many factors involved in cancer growth and spread we can develop a virtual model of how cancers can be expected to grow, which would give clinicians another valuable tool in diagnosing and treating individual patients."

You can read more about the research at the Mathematical Biology Research Group's homepage, and about mathematics in medicine on Plus.