Elliott Lieb of Princeton University has been awarded the 2022 Gauss Prize at the International Congress of Mathematicians. The Prize is awarded every four years at the Congress to honour scientists whose mathematical research has had an impact outside mathematics. This year the Congress is which is held as a virtual event with only the prize ceremonies and lectures taking place in-person in Helsinki, Finland. 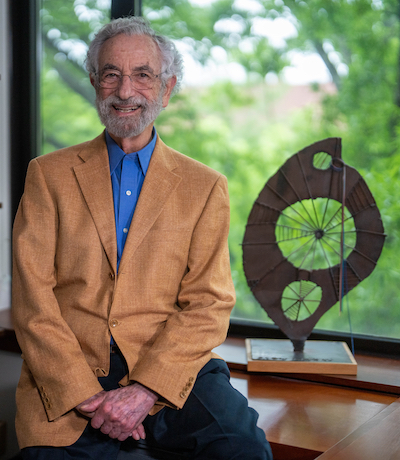 Lieb won the prize for "outstanding contributions to physics, chemistry, and pure mathematics." For Lieb, the intersection of these three vast areas is something we all know even though we can’t see it: that all matter in the world, including ourselves, is made up of a multitude of individual atoms and molecules. Everything we could care to explore in the physical world can be viewed as a system of many particles.

Lieb was interested in this view of the world "from the get go," he told us in the run-up to the Congress. "Whatever talents I have, they seem to fit in with this area. I didn't choose it, it chose me."

That maths is an important tool in physics becomes clear as soon as you open a textbook: what you will see is equations, and lots of them. Maths was central to Lieb's work from the very beginning (the PhD he received from the University of Birmingham in 1956 was in "mathematical physics") but its true power became clear to him when he took a position as a staff theoretical physicist at IBM in 1960.

"I met two physicists here, Ted Schultz and Dan Mattis, who were young guys like me," he recalls. "We did mathematical things together, and all seemed to have an interest in proving things."

One thing Lieb and his new colleagues looked at was why some materials, such as iron, are magnetic. The eminent physicist Werner Heisenberg had come up with a theory to explain ferromagnetism from the atomic viewpoint in the 1920s. It worked when the particles involved were distributed across three-dimensional space, as you would expect. But there was no reason why it shouldn't work when the particles were all lined up along a one-dimensional line. "In fact, from a theoretical point of view, the effect [Heisenberg described] should be more pronounced in one dimension than in three dimensions."

What Lieb and Mattis were able to prove, though, was that this was false. Not only that, but the complete reverse was true: rather ferromagnetic, a one-dimensional system becomes antiferromagnetic.They did this, not through experiments, but using the mathematics that describes the particles. "So the Heisenberg theory, though there may be a germ of truth in it, by itself did not sufficiently explain ferromagnetism."

The result upset Lieb's teachers, which included Nobel-laureate-to-be Hans Bethe and the eminent Rudolf Peierls. "They didn't believe it at first, though later they came around to it," Lieb recalls. "This was the first time I truly applied mathematical thinking to physics. It made us think, 'this is good, we should keep going'."

The stability of matter

From then on Lieb applied his mathematical prowess to a vast range of problems in a career spanning seven decades and still going strong. He is modest about his name being attached to an astonishing number of results. "I am sorry to call it that, but it's how it's become known," is what he says when talking about them.

When we asked him for pieces of work he is particularly proud of, he points to two such eponymous results: the Lieb-Thirring inequality and the Lieb-Oxford inequality. Both are ingredients in the resolution of a worrying problem that, for a long time, lay at the heart of physics: it wasn't clear why the matter we see around us, and the matter that we are made of, doesn't just collapse into ever smaller heaps, perhaps producing violent explosions along the way. 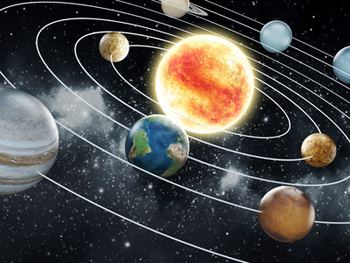 Most of the matter in our solar system is concentrated in the Sun.

This might seem like a weird question at first, but things become clearer when you think, as an analogy, of our solar system. The Sun, which sits at its centre, formed through gravitational collapse. Matter that had originally been distributed across a larger region of space bunched up because regions that were more dense started to exert a gravitational pull, attracting more matter towards a centre of gravity and eventually forming a massive body. The only thing that stops our Sun from collapsing further to form a black hole is that the collapse raised the temperature to such an extent that thermonuclear fusion started occurring at the centre of the Sun. The resulting outward pressure counteracts the gravitational force, keeping the Sun in a state of equilibrium.

The reason why the planets, including our own, don't fall into the Sun is that they have just enough momentum in a sideways direction to end up in an orbit around it. But they are outliers: the vast majority of matter in our solar system is concentrated in the Sun.

When it comes to atoms and molecules, the force of gravity is negligible. Instead, they are held together by intermolecular forces. "The question is, if I have an enormous number of atoms banging around, for example in a box full of gas, why doesn't this stuff just stop behaving like atoms and condense?" says Lieb. If such a collapse were possible in a box of gas, then it would also happen in any other piece of matter we see around us, such as a stone collected on a nature walk. But this isn’t the case: a stone doesn't collapse in on itself to form some sort of a mini Sun. And as Lieb has written in a beautiful article from 1990, "bringing two stones together produces nothing more exciting than a bigger stone."

The Lieb-Thirring and Lieb-Oxford inequalities are both of importance in this question. They are entirely mathematical results, derived from the central equation of quantum mechanics, called Schrödinger's equation. Both inequalities tell us about forms of energy involved in a system. They enabled Lieb and Walter Thirring to show that the stability of matter is not unexplained, but a consequence of accepted theory, improving on work that had previously been done by Freeman Dyson and Andrew Lenard.

Proving things like the stability of matter is important from a fundamental view point. If our existing theories couldn't explain the most mundane things we see around us, such as stones, then this would be worrying. But many of Lieb's results have also been useful in a practical sense. 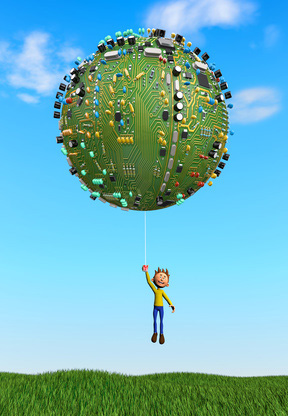 The Lieb-Oxford inequality is an example. For industrial purposes, for example in material science and chemistry, people often need to simulate the behaviour of many tiny particles on a computer. The Lieb-Oxford inequality serves as a reality check here, says Lieb. "If you make a calculation and find that you have [broken the inequality] then you know you need to start over again. So the [inequality] is useful to people. There is lots of money attached to this."

Another area Lieb has contributed to, which may in future find exciting real-world applications, is quantum information theory. If we are ever going to build those fabled quantum computers, whose power will outstrip anything we know today, then it’ll be off the back of this theory — which is why it's an extremely active field of modern research.

An important concept in information theory is that of entropy. Although probably the "most misunderstood word in the English language," as Lieb puts it, in the context of information theory we can think of entropy as a measure of the amount of information contained in a system. In the classical context, where the system might be a book or computer hard drive, this information-related entropy was defined in a revolutionary 1948 paper by Claude Shannon (see this article to find out more).

In the quantum setting an analogous role is played by something called Von Neumann entropy. An important result Lieb was able to prove together with Mary Beth Ruskai, using some beautiful mathematical theory Lieb had developed previously, describes how the Von Neumann entropies of quantum systems that are all part of a larger system relate to each other. The result, known rather un-snappily as strong subadditivity of quantum entropy, underlies many of the important results in quantum coding theory that people have come up with since.

While this article barely scrapes the surface of Lieb's contributions, one thing that has probably become clear is that mathematics has been a driving force. "I consider myself a mathematical physicist," he says. "I believe that mathematics, especially pure mathematics, has a meaning and use in physics and should be encouraged." The conversation also goes the other way around: some of the tools that Lieb has developed to study physics have found important uses in other areas of mathematics.

The Gauss prize citation puts it most succinctly. "Elliott H. Lieb's work has a truly outstanding combination: as mathematical work, his contributions have a hard-to-rival impact on other sciences, and as applied work, his contributions have a hard-to-rival mathematical depth. It continues the tradition of a dialogue at the highest level between mathematics and physics, and beautifully demonstrates the power of mathematics as a theoretical and practical tool to understand nature."

Marianne Freiberger and Rachel Thomas, Editors of Plus, interviewed Elliott Lieb in May 2022.