A fat chance of chaos?

If you think that big isn't beautiful, then think again. It's just been proved that Julia sets, those fractals known for their stunning beauty, can be fat. And this fact means that you've got a non-zero chance of hitting on chaos.

Julia sets are one of the few objects from pure maths that have achieved fame in the wider world. With very few exceptions, Julia sets are fractals: zoom in on one of them and you'll find the same amount of detail at every level and the same patterns repeating again and again. This wealth of structure and self-similarity are the hallmarks of complicated dynamical processes that can be found in everything from nature to the stockmarket. To mathematicians Julia sets embody chaos because they represent dynamical systems whose future behaviour is unpredictable. 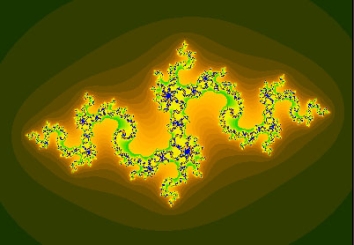 Dynamical systems, processes that change over time, are everywhere; just think of the weather, the stockmarket, or chemical reactions. Mathematical models can be used to predict how these processes evolve. Take the population of snails in your garden, for example. There'll be a maximum number of snails that the habitat can sustain, and every day some proportion of this maximum number is alive. A simple model for how this proportion, which is a number between 0 and 1, changes every month is given by the relation xn = rxn-1(1-xn-1), where xn is the proportion of snails alive in the nth month. If you have a proportion x0 today, then next month the proportion is x1 = rx0(1-x0), the month after it is x2 = rx1(1-x1), and so on. Here, the number r represents the growth rate of the population. What we are doing effectively is to take some initial proportion x0 and applying the function f(x) = rx(1-x) again and again to get the sequence

and this process is called iteration.

If the growth rate r takes this particular value close to 3.57, then the change of the population over time depends very much on your starting value x0. Slightly altering this value — for example by abducting one of the snails — can have huge implications in the future. This phenomenon is commonly known as the butterfly effect and is the fingerprint of chaos. If a starting value x0 is sensitive to variation in this way, then we say that the function we're dealing with is chaotic at x0.

The function f(x) = 3.57x(1-x) of our example is not chaotic at all starting values: if you check what happens at other starting values that are bigger than 1 or less than 0, for example, you'll find that no butterfly effect kicks in. No matter where you start, you simply get a sequence of negative numbers that get smaller and smaller, steadily approaching negative infinity. A change in starting value doesn't matter here. Thus, a function can be chaotic at some points and perfectly predictable at others. 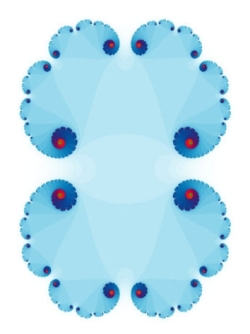 where a, b and c are fixed numbers. Quadratic polynomials are some of the simplest functions there are, and the fact that chaos arises even here shocked mathematicians when they first realised it. It became clear that to really understand dynamical processes and chaotic behaviour you have to start here, with the very simplest examples.

But what does all of this have to do with Julia sets? Well, take a function f(x), for example the quadratic polynomial above, and rather than just looking at it as a function of the real numbers, regard it as a function of the complex numbers. (For an introduction to complex numbers see Plus article curious quaternions.) Now take all the points of the complex plane at which your function f(x) behaves chaotically — this is your Julia set. Every complex quadratic polynomial has its own Julia set consisting of those points at which a slight variation of the starting value leads to huge differences after some steps in the iteration. If you'd like to see how to find the Julia set of the simplest quadratic, have a look at this example. Julia sets were first defined independently by Gaston Julia and Pierre Fatou in 1919, but received little attention until the 1980s, when computer graphics revealed their amazing beauty.

As mathematicians dug out the old results, they found that every single quadratic polynomial can produce chaos. No matter which quadratic polynomial f(x) you choose, there are always points in the complex plane at which f(x) behaves chaotically, so a Julia set exists for every f(x). But how abundant are these points? If you randomly pick a point, what's the chance that it's one of the chaotic ones, in other words that it's in the Julia sets of your f(x)? At first it seemed that this probability is zero for all possible f(x) — chaos is there, but it's very thinly spread.

"Until around 1990, it was generally thought among specialists that the Julia sets of complex polynomials are very thin, that taking a point at random you had all chances to fall on a point with 'tame' behaviour, and probability 0 to get chaos," says Adrien Douady, one of the pioneers of this area. "It has been proved that it is so for many polynomials. Then the general conviction slowly changed to thinking that chaotic behaviour can be more frequent for some polynomials, but still with no proof on either side. Finally, in October 2005, two young associate professors, Arnaud Chéritat and Xavier Buff, showed that there are polynomials for which you have a positive probability to land on the Julia set." And these cases where chaos is more abundant are the fat Julia sets. 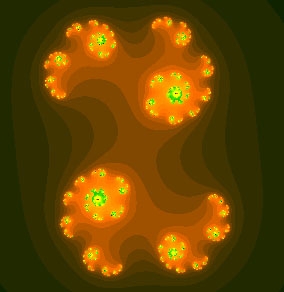 This result belongs to the pure mathematical side of dynamical systems theory, and it's hard to tell what kind of impact it will have on real life. But it's an important piece in the jigsaw of understanding the maths behind the very root of chaos. In some sense it's even a step backwards: in their attempt to describe the family of quadratic polynomials as a whole, mathematicians found that if they could only assume that there were no fat Julia sets, then some pretty neat results could be proved. They will now have to find a different route. But are these fat Julia sets just isolated freaks, or do they really point to some deep mathematical phenomenon? "How exceptional this situation is is still an open question" says Adrien Douady. "In Mathematics, as in all sciences, every time you get an answer to a question, you open several others."