Infectious diseases are much on everybody's mind at the moment, as frantic efforts are going into stopping the spread of the coronavirus and developing a vaccine. 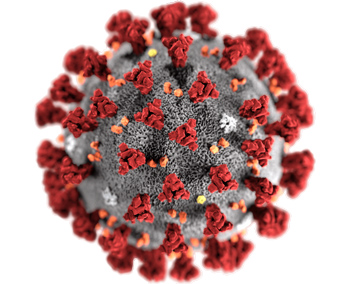 Medical research is obviously important in this, but so is mathematics. It is used extensively in modelling infectious diseases: finding out how rapidly they can be expected to spread, how many people will be affected, and also what proportion of a population should be vaccinated, if a vaccine exists.

A basic mathematical model, developed back in the 1920s but still used today, is called the SIR model. To understand how it works, imagine you are playing a computer game. In it there's a population of people (of a city, country, continent or the world) divided into three classes: those that are not yet sick, but susceptible to the disease (class S), those that are sick and infectious (class I), and those that have been removed from the disease (class R), either because they have recovered and become immune, or because they have died. There also is a set of equations which describes how many people pass from one class to another in a given time step, say in a day, or in a month. You now click "go" and watch the computer simulate the disease developing over time. This, in essence, is how scientists use the SIR model.

Of course, everything depends on the equations that govern the transition from one class into the other. In the basic SIR model, these equations depend crucially on the likelihood that an infected person infects someone else and on the average length of time someone is sick for before they recover or die. When scientists use the SIR model to predict the evolution of a disease, they estimate these parameters by observing how the disease behaves in real life. By figuring out the impact interventions, such as travel restrictions or improvements in hygiene, have on the important parameters, they can also predict how useful those interventions are likely to be.

One number (almost) says it all

It turns out that much hinges on one special number, called the basic reproduction ratio, usually denoted by R0. It measures the number of people an infectious person goes on to infect, on average, in a totally susceptible population. For measles, which is airborne and spreads easily, R0 is estimated to lie between 12 and 18, and for the current coronavirus estimates typically lie between 2 and 4 (see, for example, this paper). The basic number tells us how rapidly a disease will spread initially and therefore give us an idea of how much a population is at risk. If R0 is greater than 1, then the SIR model predicts the number of cases will increase rapidly at the start of an outbreak, whereas if it is less than 1, the disease will always fail to spread. R0 also helps to estimate the number of people likely to escape infection. And crucially, R0 gives the proportion of the population that should be vaccinated to eradicate a disease: that proportion is 1-1/R0.

The SIR model as we have described it here is of course too simple to apply to all real-life diseases and you may have to modify it to get more accurate predictions. For example, some diseases, such as childhood diseases and AIDS, affect some people more than others, so we may have to subdivide the population into further classes. The infection rate may also vary over time, for example it's higher among school children during term time than during the holidays, and a more sophisticated model needs to take account of that. And some diseases, like malaria, are transmitted by animals and so the model must include animal as well as human populations. But still, the SIR model is a good starting point for building those more complex models.

To find out more about the SIR model, the basic reproduction number, and the maths of infectious diseases in general, read these Plus articles:

To see all our content on epidemiology, see our infectious disease package.

Educational post on how to model the outbreak of the coronavirus

I wrote a blog post on how to model the outbreak of the coronavirus, which might be interesting in this context: https://blog.ephorie.de/epidemiology-how-contagious-is-novel-coronaviru…