The media is buzzing with swine flu numbers. Latest government figures say that over 100,000 people in England came down with swine flu during the last week — that's almost twice the amount of the previous week, and up to five times higher than the seasonal flu figures recorded last winter. Twenty-six people in England have died of the disease. To cope with the increased demand for medical advice, the government has just launched its new pandemic flu service.

Do your bit to help scientists understand swine flu

Take part in the online flu survey developed by researchers at the London School of Hygiene and Tropical Medicine.

But where do the numbers come from? Patients with swine flu symptoms are no longer tested in the lab or traced, so the published figures are estimates, rather than absolute numbers. The Health Protection Agency (HPA), which publishes a weekly swine flu update, bases its figures on surveillance systems. GP surgeries can sign up to networks through which they report on flu-related consultations. England, Scotland and Wales each have their own network, but there is also a nation-wide surveillance system, comprising over 3,300 GP practices and covering a total of 22 million patients. Calls to NHS Direct are also monitored for influenza cases in general, and since recently for swine flu in particular. The data collected through these systems, augmented with virological information, is then amalgamated to give the published estimates. 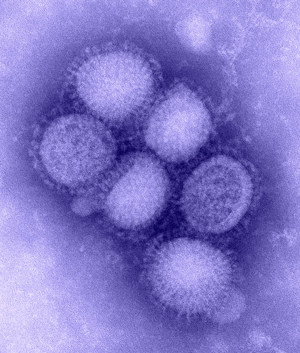 An electron microscope image of the H1N1 influenza virus. Image courtesy US Department of Health and Human Services.

An obvious caveat here is that many people with mild symptoms won't visit their GP or call NHS Direct, so they can slip through the surveillance net. The HPA is aware of this and uses experience from past flu epidemics to adjust the estimates using statistical methods. But how accurate are their figures? "That's very hard to say," says Ken Eames, Research Fellow from the Infectious Diseases Epidemiology Unit at the London School of Hygiene and Tropical Medicine. "Early on in the outbreak, the HPA were putting a lot of effort into contact tracing: if they found one infected person, they'd trace all their close contacts and carry out tests in the lab to see if they also got infected. So early on, the figures were probably pretty accurate. Now, the figures are not going to be particularly precise, but they are almost certainly in the right order of magnitude."

But with the government encouraging people with mild symptoms to stay away from the health system and use public information instead, uncertainty surrounding infection numbers is likely to increase. With a new flu strain like H1N1, this is problematic, since accurate statistical information is vital in assessing risks, and formulating guidelines for the public. "For example, at the moment it's not clear which social contacts are implicated in the spread of the infection," says Eames, "[People want to know] if they should be avoiding public transport or public places. The answer is that we don't really know. If you're in a crowded place, there must be some risk of picking up the infection, but we don't know if this risk is significantly bigger than zero."

The mortality rate associated to swine flu is also shrouded in uncertainty, as experts pointed out in a recent study. The rate is calculated by dividing the total number of infected people by the number of deaths due to swine flu. Even with an accurate estimate of infection numbers, there is a problem, because currently the HPA records deaths of people with swine flu, rather than deaths of swine flu. Conversely, some deaths that are in fact due to swine flu may be attributed to other causes, for example pneumonia. What's more, infected people don't die immediately, so the rate should really be computed from a sample of people that have been monitored through the whole course of the disease, until recovery or death.

Basic disease descriptors, like the ease of transmission and the mortality rate, are not only essential in assessing where we stand, but in finding out where we're heading: projections of how the pandemic will spread and how many people are likely to die are based on mathematical models, which take these estimates as their input — the vaguer the estimates, the less reliable the predictions. (See the Plus article Pan(dem)ic? to find out more about the models used.) 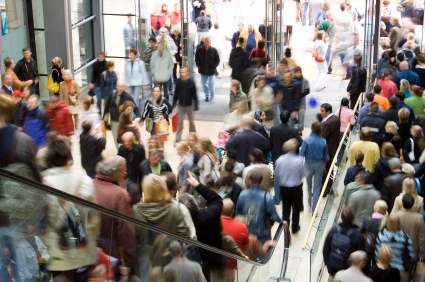 How risky are social interactions?

Statistically, the ideal way to assess the epidemiological descriptors of swine flu would be to take a large random sample of healthy people in the population and monitor them over time. This is no easy feat, but Eames is involved in a project designed to come close. This week, his team at The London School of Hygiene and Tropical Medicine launched an online flu survey, to which people can submit regular health updates, whether they have symptoms or not. "We're actually after recruiting healthy people, as well as infected people," says Eames, "We want to look at the incidence of infection over time in [those that started out healthy]. For example, if we managed to recruit 100,000 people to the survey, and discover that [during a particular week] 1,000 of them pick up some symptoms which look like swine flu, then that would tell us that in the course of this week 1% of our sample became infected, which would in turn tell us something about the amount of infection out there."

Apart from collecting basic information on symptoms, the survey also collects information on respondents' social contacts, to give an idea of the all-important transmission rate. "A lot of the information that will come out of [this survey] is just the sort of parameters that mathematical models are currently missing," says Eames, "for example the patterns of social interactions, and the risks of different kinds of interaction. These are currently based on common sense and the occasional survey from decades ago. It will be really useful to get that sort of information directly."

The survey has just been launched and the team will not do any detailed analysis of the data until enough people have signed up. Current results are likely to over-estimate the extent of the infection: "[Our current results show] more infection in certain areas than we think there really is in the community. I'm sure that's a motivational thing, clearly you're more likely to take part if you've got symptoms to report. We're really trying to get the message out that we're after anybody and everybody to take part."

So, given the uncertainty surrounding swine flu numbers, what can we say about how the infection will progress? "It would be extremely foolish [to hazard a guess]," says Eames. "But it looks like it's going to spread fairly rapidly. It's going to behave rather like seasonal flu would, but we have much less immunity to it, so it's going to spread widely with millions of infections. But it's very hard to tell at the moment what it's going to do in any detail. The death rate is fairly similar to regular seasonal flu. This can mean a large number of people being affected, but it's not some terrifying new deadly disease that's going to kill us all."

How Many People Know What Real Flu Is/

Permalink Submitted by Anonymous on November 17, 2015

Most people when they complain of flu are only experiencing a bad cold whether it be a head, throat or chest cold or all three.

If someone has "real" flu then they will be so ill they cannot get out of bed.

It would be interesting to find out how the government etc do their surveys and if it's the case of a large number of people self
reporting then this surely must be suspect?