A first swirling glimpse of inflation and gravity waves

As we sat in a roomful of eager astronomers, cosmologists and theoretical physicists today, while they tried repeatedly and unsuccessfully to connect to a live webcast of what is being called by some "the discovery of the century" , we began to suspect that it might well be easier to detect gravitational waves from the early Universe than a livefeed from Harvard.

The announcement that had everyone so excited was from the BICEP2 project, a collaboration of researchers based in the US using data gathered from a specially designed telescope at the South Pole. They had observed the tell-tale swirls of gravitational waves in the Cosmic Microwave Background (CMB) radiation, providing the first direct evidence for the inflationary theory for the evolution of the Universe and the first ever image of gravitational waves. 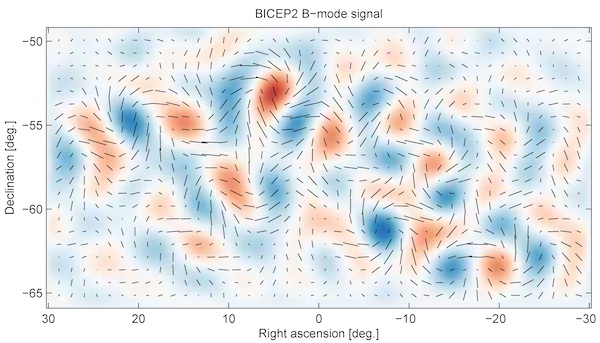 Gravitational waves from inflation generate a faint but distinctive twisting pattern in the polarisation of the CMB, known as a curl.

Einstein's theory of general relativity explained gravity as matter causing the curvature of space-time. And, just as stirring water with a stick produces ripples, the movement of large masses can create ripples in space-time. (You can read more in How does gravity work? and Catching waves with Kip Thorne.) These ripples are gravitational waves and they have a tidal effect, squeezing space-time in one way and stretching it in another, both perpendicular to the direction in which the wave travels. Gravitational waves have been indirectly observed previously, such as in the discovery of a binary star system (containing a pulsar and a neutron star) by Russell Hulse and Joseph Taylor in 1974, where the gravitational waves were inferred from the precise rate of decay in the pulsar's orbit. The swirls BICEP2 have revealed in the CMB are the result of gravity waves interacting with light shortly before the CMB was released, providing a clear image of the effect of gravitational waves.

The various inflationary models of the Universe all predict a brief period of exponential expansion of the Universe shortly after the Big Bang. This rapid expansion magnifies any quantum fluctuations and this sudden stretching of differences in density caused gravitational waves to ripple through the fabric of the early Universe. When photons finally escaped from the grip of matter about 380,000 years after the Big Bang, in a burst of radiation known as the CMB (read more here) the light was polarised as it scattered off the matter that was feeling the effects of these gravitational waves. This polarisation curled the light in the CMB into clockwise and anticlockwise swirls seen in the images released today. 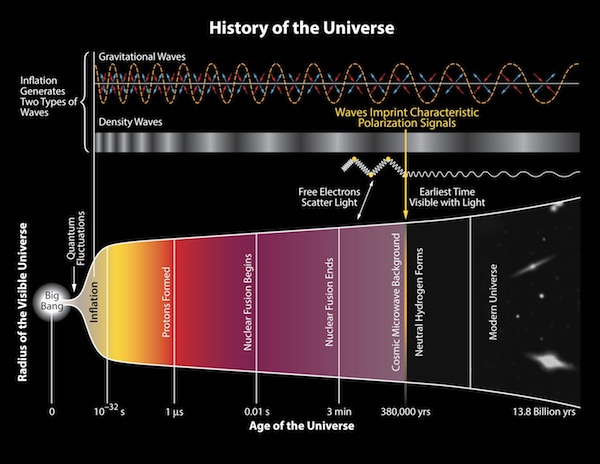 The scale of the Universe versus time. Inflation magnifies quantum fluctuations that were present just after the Big Bang, resulting in gravitational waves that leave a characteristic signature on the CMB. 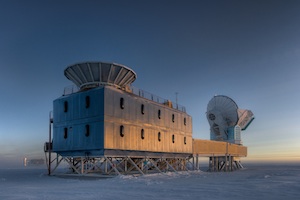 The BICEP2 experiment was conducted in the cold dry stable air of the south pole, "the closest you can get to space and still be on the ground" said John Kovac, one of the researchers. When the project began they did not expect to see these swirls, in fact they were expecting to confirm previous suspicions that they didn't exist at all. One of the investigators, Clement Pryke, told New Scientist that they expected to prove that the signal was so small that it wasn't worth trying any harder to find it: "Instead, it is loud and clear."

If these results turn out to be as exciting as they promise it is a great advance not just in giving firm evidence for the inflationary theory, but for narrowing down the possible shape such a theory can take. There are different recipes for inflation, each with different ingredients measured out in different amounts. The BICEP2 data is strong evidence for a particular ingredient, r, the ratio of the strength of the fluctuations in the gravity waves to the fluctuations in density (called the tensor-to-scalar ratio), to have a value of 0.2, significantly higher than that calculated from other observations, such as from the Planck satellite. There are already speculations as to how this tension between the values from these two data sets can be resolved, but the value from the BICEP2 data seems to support the simplest possible models of inflation.

As you read this scientists all over the world are poring over the newly released paper reporting this discovery. We'll have to wait to see their official reaction but those we have spoken to so far have been very positive. If the discovery is confirmed it might result in new names on the list of potential Nobel laureates. And more importantly, it will help further unravel the story of how our Universe evolved.