The formula that plots (almost) everything

Hold onto your logic hats! In this article we're going to explore one of the most amazing formulas in maths: Tupper's self-referential formula.

The protagonist of our story is the following inequality

Looks frightening, but we can unravel it. The symbols

together denote the floor function: for a real number

is the largest integer that's no bigger than

computes the remainder you get when you divide

you can work out the right hand side of expression (1) and then see if the inequality is satisfied. (See here for an example.)

The Dr. Frankenstein behind this creature is computer scientist Jeff Tupper. In a 2001 paper Tupper introduced this expression merely as an example; it was just one function that could be plotted with graphing software. To create a plot from the formula imagine portioning the (x,y)-plane into squares of side length 1 as shown below: 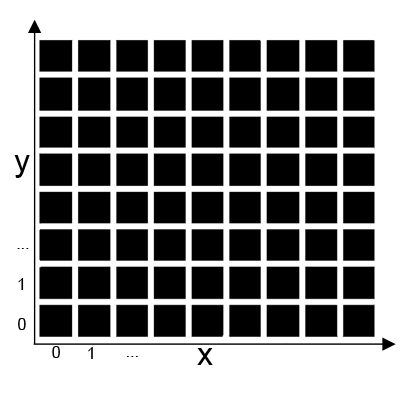 , the one to its right has coordinates

, the one above it has coordinates

and so on. To plot Tupper’s inequality we let

The plot works by either colouring a square or not colouring it: a square with coordinates

is coloured if the inequality is true for

. If not the square is left blank.

If you plot the plot for many values of

, the outcome is the following:

I'll let that sink in a moment. No, your eyes are not deceiving you, the formula plots a bitmap picture of itself! Hence the name Tupper's self-referential formula (though Tupper never called this function that himself in his 2001 paper).

There is one missing detail, however. I haven’t told you the value of the number

[Note: This might disagree with values you find in other articles on Tupper's formula. This is because there are two conventions for how to display the coordinate system. In mathematics the positive y-axis runs upwards while in computer science it is sometime taken to run downwards. But whatever convention you use with what number, the worst that can happen is that the plot appears up side down.]

If you look at the squares with

(and ignore all squares with

, you will see the bitmap image of Tupper’s formula itself.

Now let’s take it up a notch. Say we didn’t like our 543-digit value of

and wanted to scroll up and down the

-axis and see what plots we get then. As you scroll up and down the

. Here are some examples.

This is Euler's identity, one of the most famous equations in mathematics and often deemed the most beautiful:

Next there is a picture of the Gaussian integral, another favourite expression in maths:

The corresponding value of

Obviously, we don't need to restrict ourselves to pictures of mathematical expressions. Any 106x17 grid of pixels can be found somewhere in the plot of Tupper's formula.

From picture to N

As previously explained, the plotting of this bitmap function transpires over a series of squares. Say you had a picture in mind you wanted to graph and needed to know the corresponding N-value — how would you find it? The process is rather simple:

If you would like to play with Tupper's formula yourself, then visit this website. You can email your creations to us, together with the corresponding value of N, and we'll publish the best ones!

You might also want to watch the Numberphile video below. 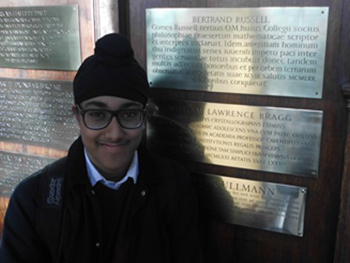 Harmeet Singh is an A-Level student from London. His A-Levels include Maths, both Further and Advanced, alongside English Literature. He is incredibly passionate about pure mathematics, particularly the Riemann Hypothesis and analysis. Harmeet hopes to complete a mathematics degree at Trinity College, Cambridge, leading onto a professorship and FRS, akin to his idols Ramanujan and G.H. Hardy.

Nice article - thanks. I'm going to have a play on the linked website!

Thank you very much and enjoy

Thank you very much and enjoy!

Kindly suggest me any app to plot this graph!!

Value of N for Euler's identity

The value for N does not work when entered into elmismopancho's Tupper Plotter at:

The other plots such as Gaussian integral are correct and work.

Can you double check the value for N?

Thank you for letting us know, a few digits were reversed - it's fixed now!

Great stuff - thanks for that

Great stuff - thanks for that!

Nice article. Other perspective for N.

Thank you for the article! I have enjoyed it

An equivalent way to figure out the value of N is to see the 1802 squares as if they were the elements
of a geometric progression whose first member is a(1)=17 (the square on the botton of the first column) and ratio=2.

If, for example, we wanted to plot the third square from the botton of the second column the value of N would be:

And if we also wanted to plot the top square of the fourth column:

In other words, according to its position inside the geometric progression, each square has a value that has to be added to the value of other squares to be plotted together.

The final result for N is the same, but seen from other perspective. :-)

Thank you very much and that's a really interesting perspective on the value of N. Fascinating!