Listening out for alien life

Astronomers at the University of California, Berkeley, have this month trained the world's largest steerable radio telescope on 86 Earth-like planets. The data collected by the telescope will later be analsyed by an estimated one million amateur alien hunters, the users of SETI@home, for messages from other civilisations. SETI@home is a distributed computing programme which uses people's home computers in the search for extraterrestrial intelligence.

"We've picked out the planets with nice temperatures — between zero and 100 degrees Celsius — because they are a lot more likely to harbour life," says physicist Dan Werthimer, chief scientist for SETI@home and a veteran SETI researcher. 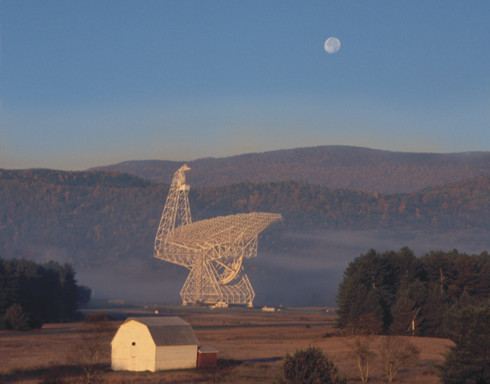 Werthimer's 30-year-old SETI project normally uses the world's largest radio telescope, the Arecibo receiver in Puerto Rico. But the giant "ear" used for this new search will be the Robert C. Byrd Green Bank Telescope in West Viriginia. It can focus on an area of the northern sky that Arecibo cannot view and it can also scan a larger range of wavelengths, including those away from the region traditionally favoured by alien hunters, called the waterhole. This means that even if aliens are not intentionally sending mesages to us, we may be able to listen in on their private communications.

If you listen out for signals from space, what you hear is a lot of noise. The galaxy itself produces noise at the lower end of the electromagnetic spectrum and atmospheric processes emit noise at the higher end. But inbetween these two extremes, there is a relatively quiet region: an intelligent civilisation trying to send messages across the Universe are likely to use this quieter range in their communications.

It just so happens that this quieter region of the spectrum is associated with the two constituents of water, hydrogen (H) and hydroxyl ion (OH). Both of these emit radio waves, the former with a wavelength of 21cm (1420.40 MHz) and the latter with a wavelength of 18cm (1660 MHz). The band from 18cm to 21cm wavelengths lies within the quieter zone of the spectrum. The idea is that water-based life-forms would recognise these important markers on the spectrum and use them in an attempt to communicate with the rest of the cosmos. For this reason the band is called the waterhole — a place for life to meet and chat. "This is an interesting place, perhaps a beacon frequency, to look for signals from extraterrestrial civilisations," says Andrew Siemion, a graduate student from UC Berkeley.

The Arecibo telescope does indeed focus on a range centering on the 21cm line, but Werthimer says that it's worth widening the search. "Searching for ET around the 21 centimeter line works if civilisations are broadcasting intentionally, but what if planets are leaking signals like 'I Love Lucy'? With a new data recorder on the Green Bank telescope, we can scan a 800 MHz range of frequencies simultaneously, which is 300 times the range we can get at Arecibo."

The 86 planets the telescope will investigate were chosen from the 1,235 planetary systems spotted by the Kepler space telescope in our galaxy. After it has targeted each of these systems, the Green Bank telescope will scan the entire viewing field of Kepler for signals from other planets too. "If you extrapolate from the Kepler data, there could be 50 billion planets in the galaxy," says Werthimer. "It's really exciting to be able to look at this first batch of Earth-like planets."

SETI@home users can expect the first Green Bank data to arrive at their computers in about two months and the complete analysis could take up to a year.

Find out more about alien life in the articles:

And about distributed computing in the articles: