Isaac Newton didn't really distinguish between science and his other great interest, alchemy. So it's only fitting that his laws of motion are today being used to produce gold. Not from base metals, but from the effort of Britain's top athletes, backed by teams of engineers who research, analyse, model and tweak to gain their athlete the tiny advantage that can make the crucial difference. Last week leading researchers in sports technology met at the Royal Academy of Engineering in London to demonstrate just how far their field has come over recent years.

Listen to the podcast accompanying this article.

There are two things that distinguish contemporary sports engineering from the traditional tinker-away-in-a-shed job. New technologies mean that the performance of athletes and equipment can be measured, tested and simulated in a way that previous generations could only dream of. Tiny winning margins mean that any advantage that can be gained in this way is worth the effort. "For some of the changes we're making to footwear, for example, we estimate the change to be worth a few hundredths of a second in an Olympic athlete," says Michael Caine, Director of the Sports Technology Institute in Loughborough. "That can be the difference between gold and silver."

Adding up to success 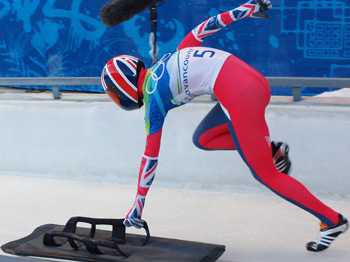 An example of the impact of sports engineering is the skeleton bobsled on which Amy Williams hurtled to victory in the 2010 Winter Olympics. Researchers created an aerodynamical computer simulation of the athlete and sled, a bit like a virtual wind tunnel, which allowed them to see the effect of the tiniest changes to the athlete's posture and the sled's shape. "[Such models] enable you to look at small features which would be hidden in the noise of a real wind tunnel," explains Steve Haake, Head of the Centre of Sports Engineering Research at Sheffield Hallam University. "You might be looking at a wheel nut or a particular shape on the edge of the sled, where changes might enable you to make some kind of performance gain." Essentially, you're trying to minimise the cross-sectional area of athlete and sled and to maximise the efficiency of the airflow over them, because the forces at play are proportional to these two factors. "And you'll do absolutely everything within the laws of the sport to achieve that," says Haake.

Newton's laws lie at the heart of any such computer simulation. "We generally start with Newton's second law of motion, F=ma, force equals mass times acceleration," explains Haake. "If you can identify what all the forces are, then you can identify acceleration, which helps you identify velocities and movement." Newton's equations allow you do a first back-of-the-envelope calculation, to get a feel for the biggest features in your problem, for example aerodynamic drag in the case of skeleton.

Newton's equations give you the big picture, but they are not quite enough to give you detailed information on the effects of tiny tweaks to your equipment. Here you resort to numerical approximation. "You take a picture of the surface of the athlete and you split that surface up into a number of elements," explains Haake. "Each of these elements will have a specific material equation attached to it, for example Hooke's law, [which describes how an elastic material responds to forces]. You use that same equation [for all elements] across the whole surface, and that will give you the way the whole surface deforms under a given force." This finite element analysis can also be used to understand the airflow around an object: in this case you split the air around your shape into small elements and look at the equations governing airflow in each of them. "Because computers are now so powerful, you can do a mesh of, say, 8 million elements," explains Haake. "So you can do absolutely huge problems on your computer."

Sports engineering has also made dramatic strides in sports apparel, for example, footwear. The human foot is a complex beast and there's no equation telling you how tweaking a shoe might impact on performance. Instead technology and mathematics is used to capture information from real life. Michael Caine explains how his team uses sophisticated 3D motion analysis, which works using visual markers attached to strategic places on an athelete's foot within a running shoe, which is then filmed using high speed video. "You take multiple points in 3D space and you then use a mathematical technique called inverse dynamics to derive things like moments of inertia, centre of rotation, power and energy generation," says Caine. "This enables us to change the mechanical properties of the footwear and understand what effect that has on the kinematics of the foot. Then we can see if the athlete is generating more power and if they are, whether they are running faster or jumping higher." And it turns out that not every shoe fits every athlete: comparative studies of barefoot and shoed sprinting have shown that the optimal stiffness of a shoe is different for every athlete and it seems to depend on the thickness of an individual athlete's achilles tendon.

But there's a whole other dimension of sports technology, which Scott Drawer, Head of Research and Innovation at UK Sport refers to as the "science of coaching". The idea here is to replace the subjective judgments of athlete and coach by accurate real-time measurements of the athlete's performance, which the coach can use to make objective decisions on what works and what doesn't.

"If you take a sport like rowing for example, we may be working with the athletes to develop appropriate sensor technologies to measure aspects of performance on the boat while they're out rowing," says Drawer. "That may involve the use of miniature electroncics, telemetry and various software systems to help us bring back all the data and play it back for the coach to see how the athletes are performing every day. There's lots of complex engineering behind that, although what the end user requires is quite simple."

Engineers at the Sports Technology Institute in Loughborough are working on a similar project for swimmers and divers. It uses sensors, GPS and image recognition software to track athletes in the water and determine their acceleration, and instrumented diving blocks to assess their posture on and movement off the starting block.

Changing the nature of sport 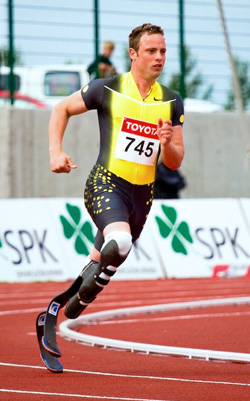 Paralympic athletes are also enjoying the benefits of new innovations in sports engineering. Detailed analysis of wheelchair basketball and customised support stuctures for throwing events and archery have made a dramatic difference to the performance of paralympic athletes. Engineers at last week's meeting agreed that it won't be long before double amputees, using prostheses similar to those worn by "blade runner" Oscar Pistorius, will break able-bodied records in running events.

These developments are promising but they also raise difficult questions about the role of technology in sport. Should disabled athletes be allowed to compete with non-disabled athletes (as it stands Pistorius is eligible for the 2012 Olympics)? What is the difference between sports technology (whether used by disabled or non-disabled athletes) and doping? And what do these developments mean for the performance of poorer countries? If GDP is a good predictor of Olympic success now, the increasing use of technology is bound to make it more so in the future. These are uncomfortable questions for the regulators of the sports to ponder, but not all of these questions are new. In 2009 the governing body of swimming, Fina, banned controversial new swimsuits and in the 2010 Winter Olympics there were unsuccessful complaints about the aerodynamics of Amy Williams' helmet. For the governing bodies it's about striking the difficult balance between innovation and retaining the essence of a sport.

Making us all winners

Meanwhile, sports engineers are quick to point out that this isn't just about winning gold in the arena. Sports technology can be the crucible in which new technologies are created that can change all our lives. Many athletes are quite happy to play guinea pig, testing new equipment and even new medical procedures for treating injuries. Innovations made in elite sports often trickle down to ordinary mortals. "One example is sensor technology for wheelchair athletes," says Scott Drawer of UK Sport. "That's about understanding how people perform in their chair by building sensors in the wheels to understand the forces and power applied. That concept has now crossed over into the NHS, for rehabilitation, and is also used with recovering troups that have come back from conflict." Another example of the trickle down of technology from sports is carbon fibre: today it is a common material in a variety of goods, but initially it was developed and tested for innovations in sports technology.

For those of us who aren't blessed with the natural talent or supreme dedication to be an elite athlete, a career in sports technology may be the only way to golden glory. There are tailor-made degree courses now on offer but all experts we spoke to agree on one thing: maths is at the core of whatever you'll be doing. "Maths is the language of science," says Steve Haake. "You must take maths as far as you can. If you can get to GCSE that's great, if you can get to A level, that's fantastic, if you can get to degree level, that's even better. But take maths as far as you can."