Maths in a minute: Fourier series

One of the nicest examples of a branch of maths devised to solve one problem, which then solves many other problems, is that of Fourier series. Joseph Fourier was a 19th century French mathematician who was interested in how heat flowed through objects. His first contribution was what is now known as the heat equation: it's an example of a partial differential equation and it describes the way the temperature

of an object depends both on time

. In modern notation the heat equation is:

is the thermal conductivity of the object, a number that measures the object’s ability to conduct heat.

A solution to the equation, if you can find it, would tell you the temperature

of the object at each point

. Fourier's first extraordinary insight was that he could solve the heat equation by expressing

as a sum of simple functions and then finding the solution in terms of these functions. A good way to think of this is that it is much easier to build a house brick by brick, than to build it in one go. His second extraordinary insight was in his choice of functions to construct the temperature out of. His choice was to use the sine and cosine functions, which arise in trigonometry (the study of triangles) so that he wrote down the expression for

where the values of

depend upon the starting conditions.

This sum goes on forever — the next term is

, are coefficients whose exact value depends on the starting conditions (see the box). Such an expression is now called a Fourier series. 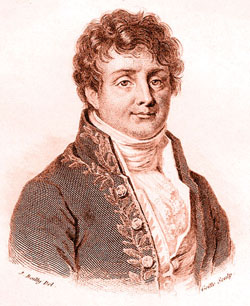 . After all, what was the possible link between triangles and the flow of heat? However, it was exactly the right choice to solve the heat equation above. It allowed the problem to be broken down into a set of much simpler problems, each of which could then be solved and combined to find the solution of the original problem. In fact, shortly after Fourier’s original insight it was found that the use of sines and cosines to build up a function could solve a huge number of other problems as well, including describing the motion of waves, the behaviour of gases, many problems in gravity, electrostatics, electromagnetism, and even the behaviour of the stock market.

Following Fourier's great discovery many mathematicians got to work on extending and generalising his idea, finding many nice results on the way, including a slick derivation of the wonderful formula (originally discovered by Leonhard Euler):

Fourier series, and their discrete generalisations on a computer, play a fundamental role in modern technology. In particular we use them to make up, and process, sounds, information and images, and the music, TV and video industry would not exist without them.

Find out more about Fourier analysis in this podcast featuring Chris Budd.

For more on applications of the maths inspired by Fourier series, see

Leonard Euler already found that many periodic functions could be represented as series of sines and cosines. He even found the general formula for the coefficients as he was already blind...