The monster in question comes from group theory – the mathematical study of symmetry. A group is a set of things (usually called elements) and a rule for how these elements interact so the resulting system is self contained and satisfies some simple rules. (You can read all the details in The power of groups.)

One of the original inspirations for group theory came from studying symmetry groups – the symmetries that can exists together in an object. For example the symmetries of a rectangle are reflection in the vertical axis, reflection in the horizontal axis and a half-turn around the centre. These symmetries of a rectangle, together with the identity symmetry (that does nothing), form the Klein 4-group – one of the smallest groups. There are also infinite groups, such as the set of whole numbers which form a group under addition. But every group, finite or infinite, is made up of building blocks called simple groups in an analogous way to every number being uniquely expressible as a product of prime factors.

One of the greatest mathematical achievements of the last century was the classification of the finite simple groups, an enormous theorem that took over 30 years, 100 mathematicians and 10,000 pages to prove. This result gave a description of every type of finite simple group: they were either one of 18 well-understood infinite families (such as addition modulo a prime number, eg. addition modulo 7) or they were one of 26 other individual possibilities (called the sporadic groups). The largest of these 26 outsiders is the Monster group, which consists of a mind-boggling

It turns out that every group, whether it's the symmetries of a rectangle or the whole numbers under addition, can be represented using mathematical objects called matrices. These are extensions of one-dimensional linear functions, such as

, to higher dimensions. Each element of the group corresponds to a

matrix that acts in

-dimensional space, and these matrices behave in the same way that the original group elements (that is if

in the group, then

for the corresponding matrices

in the group's representation).

One of the other great achievements in the last century was Andrew Wiles' proof of Fermat's last theorem. Wiles actually proved a larger, less-famous but more signficant result: the Taniyama-Shimura conjecture which says that every elliptic curve (you can read more about these in Answers on a donut) is a modular form in disguise. Modular forms are mathematical objects that are symmetrical in an infinite number of ways. In the words of mathematician Barry Mazur: "Modular forms are functions on the complex plane that are inordinately symmetric. They satisfy so many internal symmetries that their mere existence seem like accidents. But they do exist." And these surprising mathematical objects have become one of the most powerful tools in number theory.

A particular example of a modular form, called the

-function, can be written as 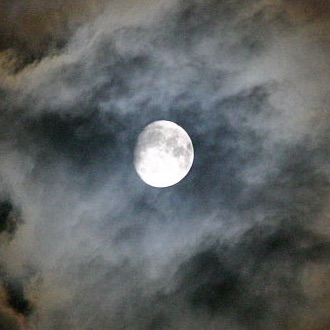 is a complex variable of a particular form. The mathematician John McKay noticed that the coefficient of

in this function, 196,884, is the sum of the first two dimensions of the Monster group's representations: 1 and 196,883. Another mathematician spotted another connection: the coefficent of

, 21,493,760, is the sum of the first three dimensions of the Monster group's representations: 1, 196,883, and 21,296,876. More and more connections between this function in number theory and the representations of the Monster group were discovered, until finally John Conway and Simon Norton conjectured that there must be some deep connection between these two unlikely familiars. This connection was so surprising that Norton and Conway called their paper Monstrous moonshine.

New light from the shadows

The Moonshine Conjecture was finally proved in 1992 when Richard Borcherds used string theory to tie these two areas of mathematics together. Now new work has just been posted (as reported in the lovely Quanta article Mathematicians chase moonshine's shadow) on an extension to the Moonshine Conjecture, called the Umbral Moonshine Conjecture. This conjecture is based on mathematical objects called mock modular forms, similar to, but not as symmetric as, modular forms. The first time mock modular forms appeared was in letters by Indian mathematician Srinivasa Ramanujan to his British colleague G. H. Hardy, written shortly before Ramanujan's early death. (You can read more about Ramanujan, Hardy and their work together in A disappearing number.)

Every mock modular form has an associated modular form called its shadow function. The Umbral Moonshine Conjecture (umbral is Latin for shadow) connects the coefficients of 23 of these mock modular forms with the dimensions of representations of particular symmetry groups. The connection seems to hinge on important objects in string theory, called K3 surfaces. Revealing the hidden symmetries of these objects could ultimately help physicists create a mathematical model of quantum gravity, finally uniting the theories of general relativity and quantum mechanics. It would be a fitting symmetry if the bridge between these two frontiers of physics was to come from a bridge between two fundamental areas of mathematics.