Outer space: Thinking inside the box

After my book 100 Essential Things You Didn't Know You Didn't Know was published I received lots of emails and letters asking about some of the mathematical applications and issues that appeared there. One topic was overwhelmingly the most common. Some people didn't understand it; others didn't believe it. Some puzzled correspondents were just interested readers, but at least one was a very famous professor of physics. What worried them so much was the infamous Three-box, or Monty Hall, problem in chapter 30. 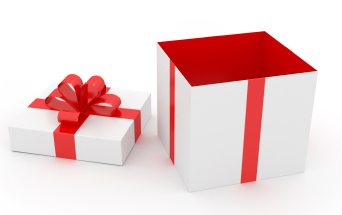 Did you pick the right box or should you switch?

You may remember how it goes. Imagine you're a contestant in a game show, faced with three boxes, only one of which contains a prize. You have to pick the prize-winning box. The game show host, who can see all the boxes' contents, then opens one of the empty boxes and asks if you want to keep to your original choice or switch boxes. What should you do? The answer is that you should always switch. There was only a 1/3 chance that your original choice was right and a 2/3 chance that it was wrong and the prize was in the other two boxes. One was opened and shown to be empty, so there is a 2/3 probability the prize is in the other box you didn't choose — switch to it! (You can find out more in the Plus article Thomas Bayes & Mr Zootpooper.)

This problem is not paradoxical — just counter intuitive — but it's a good warm-up for another problem that is much more perplexing. This time there are just two boxes. In one of them there is a prize of some value and in the other another prize of twice the value. Pick one of the boxes and open it. You are now offered the chance to switch your choice to the other box. What should you do?

The problem is that you don't know if you opened the box containing the smaller or the larger prize. So let's see what the expected pay-off is if you switch after opening one box to find it contains a prize of value V. If it was the smaller prize, then by switching you would get 2V. If it was the larger prize, you would end up with V/2. So, on average, a switch will bring you an expected prize value of 1/2 × 2V + 1/2 × V/2 = 5V/4. This is bigger than V so you always gain by switching.

This is very odd because if you always gain by switching you didn't need to look in the box, did you? Always switch. And after you've switched, the same argument applies and you should switch again! I learnt about this horrible paradox in an article by past Plus contributor Steven Brams and his colleague Marc Kilgour. It makes the three-box problem seem totally obvious. What do you make of it? An interesting clue is to start by asking what would happen if the prizes were actually £5 and £10 (or $5 and $10) banknotes?

Outer space: Thinking inside the box

Why do you say that you "always gain" by switching if the 5/4V was computed as an average? Wouldn't it be proper to say that "on average you always gain" but that you simply don't know if you gain or not for any given switch?

The article is correct

On further thought, you're right: they contain 2v and v OR v and v/2. The mistake in the author's reasoning is to consider the expectation based on a variable starting point. This will lead to a factor of 4 in the two sums of money (2x and 1/2x).

The boxes contain 2V and V reward. Half the time you open the 2V and half the time the V box.

If you never switch, on average, you get 3V/2 reward

You can't have a strategy in this game, unless you have some idea of what range of values constitutes a large and small reward.

Thinking inside the box

It seems that it doesn't matter, whether you switch or not - you get the same prize on the average. An excel calculation using random numbers in the range [0,1) with 2 columns and 20 rows, where the smaller number in row was considered to be of value 1 and the bigger number was considered to be of value 2 showed it explicitly that you get the same amount whatever is your strategy (it was excatly 1,5 average for 20 pairs of numbers). The problem is thus equivalent to coin tossing.

In the example, V is being