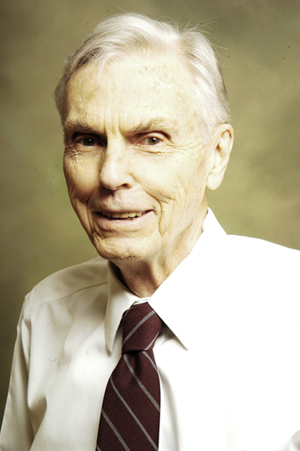 The Abel Prize 2010 has been awarded to John T. Tate from the University of Texas at Austin "for his vast and lasting impact on the theory of numbers". The honour puts Tate on a par with a Nobel Prize winner. In fact, the Abel Prize was established to make up for the fact that there is no Nobel Prize in mathematics.

Number theory lies right at the heart of maths, its history stretching back all the way to ancient Greece. It's concerned with the whole numbers, the patterns you can find within them and the interactions between them. To many mathematicians the study of these numbers captures the very essence of maths and reveals all of its beauty. As Carl Friedrich Gauss put it, "mathematics is the queen of the sciences and number theory is the queen of mathematics." But while most number theorists have been drawn to the field for its own sake, important applications have emerged over the last few decades. It is number theory that provides the essential tools for encrypting the information we send over the Internet, from credit card details to private email messages.

Tate's contributions to number theory are wide-ranging. His career has spanned six decades and a whole zoo of mathematical objects carry his name. Some of the questions he has worked on are almost as old as our ability to count. Take, for example, the prime numbers. Every whole number is a product of a unique set of prime numbers, so the primes are in effect the atoms of number theory. We have known since the time of Euclid that there are infinitely many primes, but finding out just how they are distributed amongst the other numbers has proved much more difficult: if you're given one prime, there is no sure-fire of telling what the next one is. The efforts to reveal the secrets of the prime numbers have led to some extremely sophisticated mathematics, and have posed one of the most important, and the most difficult, question of maths, known as the Riemann hypothesis. Tate's work has been central to developing this part of mathematics, edging us ever closer to a solution.

Another favourite problem of number theorists is to find whole number solutions to simple-looking equations. An example is the equation x2+y2=z2 (which you might recognise from Pythagoras' theorem). Are there whole numbers x, y and z, which satisfy this equation? In this case, the answer is yes, in fact there are infinitely many triples of numbers that do. For other similar equations though, the answer is far from straight-forward. Fermat's last theorem, which involves equations xn+yn=zn for a whole number n>2, is a case in point, as it took almost 400 years and extremely sophisticated maths to prove. Tate's work has provided high-powered mathematical machinery to attack problems of this nature. And while his primary interest lies in the beauty of the mathematics for its own sake, the insight provided by this area of study has important applications in the design of mobile phones, smart cards and even air traffic control systems.

The mathematician Marcus du Sautoy has written an excellent and accessible explanation of some of Tate's work, which you can find on the Abel Prize website. As Du Sautoy puts it, "Just as the telescope allowed astronomers to see new worlds, Tate's mathematics has provided tools and insights which have allowed the mathematicians of this generation to see further into the universe of numbers than ever before. He truly deserves the title of the Galileo of number theory."

You can find out more on related mathematics on Plus: