The Arctic ice cap - how long has it got?

Today Pen Hadow, a world leading polar explorer and environmentalist, and João Rodrigues, a physicist from the Department of Applied Mathematics and Theoretical Physics at the University of Cambridge, announced an international scientific survey to determine for how much longer there will be a permanent ice cap at the North Pole. 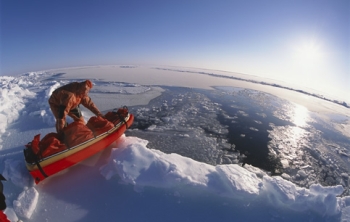 In February 2008 an expedition, comprising Hadow, the polar explorer Ann Daniels and specialist Arctic photographer Martin Hartley, will set out on a 2000km journey from Point Barrow, Alaska, hoping to reach the geographic North Pole in June. The team will be walking in temperatures as low as -50°C, and may have to swim across stretches of open water. The data collected by the team will be analysed statistically and results fed into mathematical models that scientists hope will give vital clues about the Arctic's future.

The expedition, sponsored by the global telecommunications company Vanco, could hardly come at a more pressing time. Due to global warming, Arctic sea ice is currently receding by over 70,000 km2 a year, an area the size of Scotland, and it is feared to be thinning rapidly. The consequences of a melting Arctic include rising sea levels, increased global warming due to feedback effects, and a possible slowing of the global thermohaline circulation systems, including the gulf stream. Numerous species, including the Arctic's much-loved symbol, the polar bear, will lose their habitat and become extinct. Human conflict is already on the cards with nations vying for the rights to exploit natural resources — fish, oil and gas — that become available as the sea ice cover disappears. 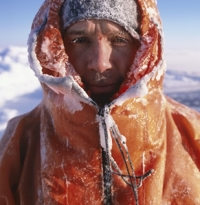 "Accurate information is vitally needed to enable world leaders to plan for the huge potential impact of the melting of the ice," says Hadow. Yet current predictions on if and when the permanent ice will disappear from the Arctic vary wildly, with scientists putting the end of summer sea ice cover anywhere between 16 and 100 years from now. A major difficulty for scientists is that an important piece of information on the current state of the Arctic is missing: we do not know much about the thickness of the sea ice cover. And it's the change in ice thickness, rather than area, that gives vital information on the melting process. 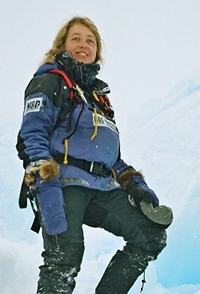 The actual distribution of ice thickness is hard to come by because traditional observation methods, using satellites and submarines, only give information on the ice on one side of the ocean surface, above or below, and have a hard time distinguishing between the snow cover and the ice itself. "The only way to accurately gauge the current ice thickness [...] is to physically go out there and measure it on the surface," says Hadow, and this is exactly what he and his colleagues are planning to do.

The all-important gadget on this otherwise muscle-powered expedition will be a surface penetrating impulse radar that will measure ice thickness every 20cm along the 2000km journey. Sitting with the radar on the Lady Herbert Main Survey Vessel, a sledge to be pulled by the team, will be two computers that process and compress the data before sending it back to the UK headquarters via satellite. In addition, the team will drill ice cores every 20km across the ice to measure ice density. 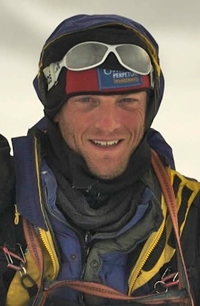 The data will be analysed over one or two years in an effort co-ordinated by the University of Cambridge's Polar Ocean Physics Group sitting within the Department of Applied Mathematics and Theoretical Physics. And applied mathematics it is indeed. The ten million readings that will be taken by the on-sledge radar call for careful, detailed and sensitive statistical analysis. The results will enable scientists to refine mathematical models that, through equations, link ice thickness to environmental factors like air temperature and can simulate ice evolution (listen to João Rodrigues in the Plus podcast Breaking the ice to find out more). These ice-specific models can in turn be incorporated in global climate models, extremely complex beasts that require powerful mathematical techniques.

It will take a while for the results of the survey to come through, but meanwhile people can share directly in the team's experience on the ice. Around five minutes of live footage will be filmed every day and broadcast worldwide. "We will be transmitting data in unprecedented amounts, opening up science and real polar exploration to a global audience for the first time direct from the ice," says Hadow.

Cambridge scientists play an important role in the survey, but Hadow is keen to stress that this is an international initiative with other organisations taking part, including the US Navy's Naval Postgraduate School at the Department of Oceanography in Monterey, California. It's an international endeavour that will have international repercussions, as the potential consequences of a melting ice cap will effect every person on the planet, be it through environmental changes, or through geo-political issues arising from the exploitation of as yet untapped natural resources. As Hadow points out, it's an unsettling fact that by the time a child born today has grown up, a North Pole covered in ice, complete with polar bears, may be a thing of the past.

Update: the expedition has now been delayed until 2009.