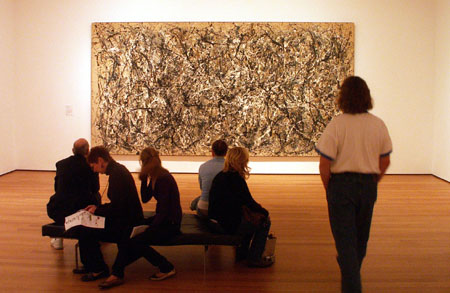 Jackson Pollock painting 'One: Number 31, 1950' at the Museum of Modern Art in New York. This photo was posted to wikipedia 5/1/2007 and is licensed under the Creative Commons Attribution-ShareAlike 2.5 License. See the image for more information.

In previous issues, Plus has explored the proposition that fractal structures within the drip paintings of abstract expressionist Jackson Pollock can be used to identify the painter by his "fractal fingerprint". See Jackson's Fractals, The Artist's Fractal Fingerprint, and Fractal Expressionism.

But research led by Case Western Reserve University physics doctoral student Kate Jones-Smith suggests that fractal analysis should not be considered a foolproof technique for authenticating works by Pollock.

In 1999 and 2000, University of Oregon physicist Richard Taylor and colleagues proposed in high profile scientific publications such as Nature, Physics World, Scientific American and Plus that fractal analysis could be used to discriminate between a Pollock drip painting and one by an impersonator.

It seemed that by 2006 public interest in the matter had waned, but this changed when Taylor was invited by the Pollock-Krasner Foundation to determine the authenticity of paintings found by Alex Matter, a close friend of Pollock's, who claimed that the paintings were created by Pollock. Taylor claimed, using his criteria for determining if a painting is by Pollock, that they were not indeed Pollock paintings.

With interest in the topic rekindled, Jones-Smith along with Harsh Mathur, published Revisiting Pollock's Drip Paintings in volume 444 of Nature, in which she contends that:

"Several problems must be addressed before fractal analysis can be used to authenticate paintings."

When coming to her conclusions, Jones-Smith analysed a creation of her own — Untitled 5. Jones-Smith shaped this drawing in Adobe Photoshop in a matter of minutes, and it is simply a child-like line drawing of 22 overlapped 5-point stars. When the researchers put this drawing through Taylor's fractal authentication criteria, it was found to be a genuine Pollock, hence casting a shadow over the process.

However, as this limit is often hard to obtain, as is the case with a painting, Taylor used an oft employed approximation of fractal dimension. The above definition means that for small L,

should be roughly equal to

— so the gradient of the plot of

over a range of L should give an approximation of the fractal dimension D. This is also known as a power law behaviour as the following equation is satisfied:

where D is the fractal dimension, k a constant.

The recent Jones-Smith work however states that Pollock's works lack the range of scales needed to be considered fractal. This is because the smallest marks of paint that are analysed by this technique are only a thousand times smaller than the canvas. The researchers claim that to establish power-law behaviour, the range of box sizes must span more than one or two orders of magnitude. For a Pollock drip painting, the range is typically limited to three orders of magnitude by the ratio of the canvas size to the size of the smallest feature.

Taylor, in a reply in the same issue of Nature, stands by his work and states that by restricting the definition of fractals to only allow power-law behaviour across more than two orders of magnitude:

"...would also dismiss half the published investigations of fractals." 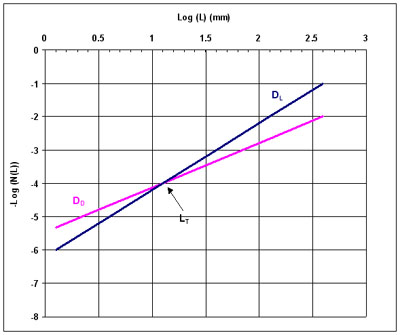 Taylor contended that Pollock paintings are comprised of two sets of fractal patterns: the first generated by the pouring process, the second by the body movement of Pollock himself. Taylor stated that these movements constituted a Levy flight, which is a type of random walk — Jones-Smith, incidentally, denies that Lévy motion is necessarily a factor in Pollock paintings. Each of these two fractal patterns has their own fractal dimension. In Figure 1, the dimension of the drop patterns is shown by line

represents the Levy movement. The transitional length scale is the cross-over point between the lines and is denoted

Taylor has published a 6 point criteria to determine if a work is by Pollock. See Figure 1 to reference these criteria:

When applying Taylor's criteria, Jones-Smith found that, when studying three known Pollock paintings, two of the three failed to satisfy them — at least the criteria that are public. Jones-Smith and her colleagues were frustrated that the full criteria were not published and so never fully tested.

Jones-Smith also notes that Taylor only analysed 17 Pollock paintings — too small a sample to draw any conclusions on Pollock's work — and that the main implication of her work with regard to the Matter paintings is that fractal analysis should not be part of the debate.

In Taylor's reply in Nature, he commented that in his opinion, Jones-Smith's star scribbles do not show fractal patterns and finds some of the analytical simulations to be flawed. Diplomatically, he concludes his reply with: "We encourage further research."

It may have taken 6 years for the question of fractals in Pollock paintings to be re-asked but I doubt it will take that long again. The debate is far from settled.