How is tennis different from table tennis? Bigger rackets, bigger balls, bigger playing area, higher net, greener surface – yes, all true, but from a mathematician's perspective the most interesting distinction is the totally different scoring systems. Each requires you to win some number of games in order to win a set and then to be the first to win the majority of an odd number of sets (for example, best of three or best of five in tennis). Tennis has it own odd sequence of scores and terminology. Here we take a look at table tennis, which first became an Olympic sport in 1988, but changed its scoring system in 2001 to make matches more exciting for spectators. 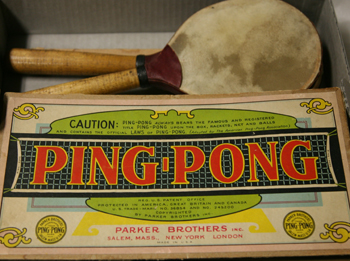 The rules of table tennis were changed in 2001 to make the game more exciting to watch. Image Daniel Schwein.

Under the old rules (which you probably still use if you play at home) each player took it in turns to serve for 5 points and the winner of a game was the first to achieve at least 21 points with a two-point margin. The match was won by the first player to win two games (i.e. best of 3). This is the set of rules I remember playing under as a child.

Under the new scoring system, as seen in the Olympic Games, players now take it in turns to deliver two serves except if they are tied at 10-10 when they take only a single serve each. The winner of a game is the first to score at least 11 points with a two-point margin over the opponent. The winner of the match is the first to win four games (i.e. best of 7). This new system leads to shorter games and reduces the period of considerable advantage which the serving player has. One-sided games don't go on for such a long time.

It is interesting to compare the old and new scoring systems from the perspective of how they favour skill versus luck. A desirable property of any scoring system is that it leads, most probably, to the best player winning. If you play a match that is decided by playing only one point then the weaker player has a much better chance of winning the match than if you play 11 points. This is why sequences of sets are played in sports like squash, tennis and table tennis: it gives time for skill to win out over luck.

If one player has the same probability,

, of winning each point (and so a probability

of losing it) and you need to win

successful points before having

losses. Suppose that the two players are evenly matched so

is very close to

is a very small positive quantity (much less than

). Then the probability of

losses in a sequence of random trials is approximately

(This approximate formula is from J. Haigh, IMA J. of Management Mathematics 20, 97 (2009) and is only accurate when 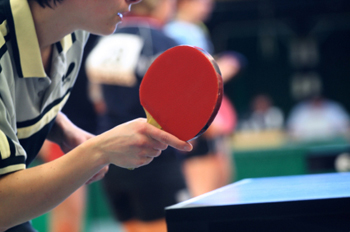 What is your chance of winning at table tennis?

So, if the chance of winning each point is exactly

is zero and the match-winning probability,

also. We also see that a very small advantage for one player (i.e.

) as the number of games played increases – skill (i.e.

) steadily asserts itself. You can also see that the more evenly matched the two players, the more games you need to play in order for

to grow significantly larger than

This is why, for example, top level mens' tennis matches may use five sets rather than just three.

The general rule is that for evenly matched players, the marginal advantage grows as

in the quest to be the first to win

games. Roughly, the marginal probability of winning a game to

points by at least two clear points and then win

games to win the whole match will be

This is because marginal advantage for winning a set of

games with a marginal advantage

But is the inherited advantage from playing

points in each game. The key quantity is the product

is the same for two different scoring systems, then they will reward skill equally for evenly matched players. What is the situation with the table tennis scoring changes? In the old days we needed

points to win a game and

games to win the match because the rule was best of three. So,

Now, if we play

points and play best of seven, so

The numbers 42 and 44 are so close that somebody must have known what they were doing when they changed the table tennis scoring system! The new system is almost the same in terms of its reward for skill over luck but offers twice as much spectator interest and less server bias. A third alternative would have been to play best of 5, ie

points, which gives a fairly similar value of

but this is too close to the old system with

to create a radical change. Playing games to

(i.e. best of 9) and one serve each would be another possibility with the same reward for skill. The meaning of common factor in these evenly matched games is fairly clear:

is a good indicator of the total number of points that are going to be contested in the match. Keeping this roughly the same is useful for event planning purposes and also keeps the skill to luck reward about the same for evenly matched players.
Read more about...
mathematics in sport
outerspace

As a mathematician who also plays table tennis I can let you know that the standard scoring system is best of 5 to 11 points in most local table tennis leagues, not best of 7. We've moved from mxn= 42 to mxn = 33. The best of 7 system is only used at high-level tournaments.