Plus Advent Calendar Door #20: Strings to the rescue?

As we saw behind yesterday's door, a problem lurks at the heart of physics. Today, we revisit an article by David Berman where he gives us a possible answer...

Evidently, since spacetime is here and this hasn't happened, there must be something wrong with combining relativity and quantum mechanics. But what? Both these theories are well-tested and believed to be true.

Perhaps we have made a hidden assumption? 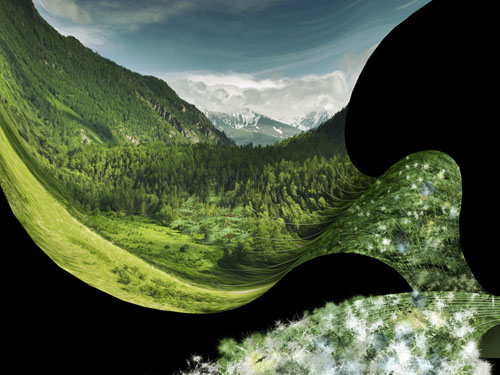 What happens to spacetime at small scales?

It turns out that indeed we have. The assumption is that it's possible to consider smaller and smaller distances and get to the point where spacetime pulls itself apart. What has rested in the back of our minds is that the basic indivisible building blocks of nature are point-like — but this may not necessarily be true.

This is where string theory comes to the rescue. It suggests that there is a smallest scale at which we can look at the world: we can go that small but no smaller. String theory asserts that the fundamental building blocks of nature are not like points, but like strings: they have extension, in other words they have length. And that length dictates the smallest scale at which we can see the world.

What possible advantage could this have? The answer is that strings can vibrate. In fact they can vibrate in an infinite number of different ways. This is a natural idea in music. We don't think that every single sound in a piece of music is produced by a different instrument; we know that a rich and varied set of sounds can be produced by even just a single violin. String theory is based on the same idea. The different particles and forces are just the fundamental strings vibrating in a multitude of different ways.

You can find out more by reading David Berman's article: String theory: From Newton to Einstein and beyond