The central place of GPS in our lives

How did you get into work today? I planned my journey on my phone with an app that uses traffic information and live data on the location of buses. On other days I might drive, navigating with my car's satnav, or if it's sunny I'll walk, following the blue dot of my location on the map on my phone.

These are just a few examples of the impact that GPS – the Global Positioning System – has on our lives everyday. It's estimated that 4 billion people use this technology around the world and it has revolutionised many areas of life, including navigation, disaster relief, climate monitoring, agriculture and industry. The Queen Elizabeth Prize for Engineering for 2019 has been awarded to engineers Bradford Parkinson, James Spilker, Hugo Fruehauf and Richard Schwartz for their foundational contributions to the creation of GPS. The prize, worth £1,000,0000, celebrates the global impact of engineering on humanity.

GPS relies on a network of at least 24 satellites that circle the globe – currently there are 32 satellites but the exact number varies. They orbit in a constellation such that for any point in the world there will be at least four GPS satellites overhead at any time. We can precisely predict the orbits of these satellites and know with great accuracy their location at any time. The satellites constantly broadcast messages, giving the time and the satellite's location when the message was sent. GPS receivers, like the one in your phone, listen out for these messages, calculating the time it took the message to travel from the satellite to you. Then using the familiar equation

To narrow down our location further, your phone listens for the message from two more satellites (remember that there are at least four overhead at any moment) and performs a similar calculation for each. You now know that you are on three different spheres, centred on each of the three satellites. Generally, two spheres intersect in a circle. The third sphere will intersect that circle in two points. Since only one of these two points is on Earth, three satellites are enough to pin-point your location. The presence of four satellites overhead allows for error correction and a more robust system. 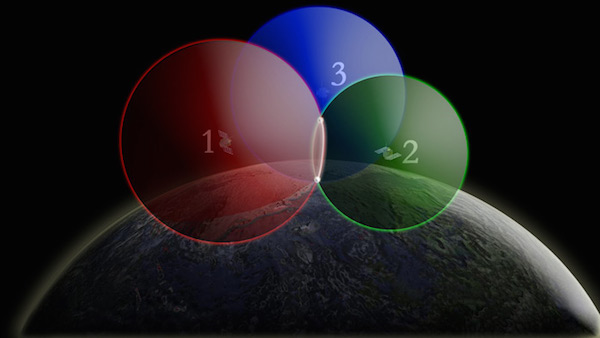 The GPS signals locate you on a sphere centred on each of the visible GPS satellite. The intersection of these spheres gives your location. (Image from NOAA)

The mathematics behind GPS is straight forward geometry, but making this happen reliably, accurately and affordably in real life has been a remarkable achievement. Parkinson led the NAVSTAR project for the US Air Force that developed, designed and tested key components of GPS. Spilker designed the signal the satellites broadcast, overcoming problems such as the interference of multiple satellites broadcasting on the same frequency. Spilker's team also designed the first GPS receiver and developed processes that are vital to GPS accuracy today. And Schwartz was responsible for designing satellites robust enough to withstand the radiation and other challengers of operating in space over a number of years. 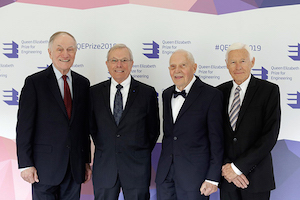 A daily challenge to the successful operation of GPS comes from an area of physics you might not expect – Einstein's special and general theories of relativity. Einstein's special theory of relativity explains that time is relative: time passes more slowly for someone travelling at faster speeds relative to us. And his general theory of relativity combines space and time into a four-dimensional fabric of the Universe called spacetime. Spacetime is warped and bent by mass, and this curvature of spacetime means that time is dilated near a large mass – clocks tick more slowly closer to a large mass than those further away.

Amazingly, these two esoteric and mind-bending concepts have an effect on our daily lives. The GPS satellites are travelling at a speed of about 14,000 km/h relative to us on the ground. At this speed their clocks run about 7 microseconds a day slower than those here on Earth. This is partly counteracted by the fact that spacetime is warped by the mass of the Earth, causing the clocks on Earth to run 45 microseconds a day slower than those on the satellite orbiting around 20,000 km above.

Together, these relativistic effects means clocks on the satellite would run 38 microseconds a day faster than those here on Earth. If this wasn't addressed it would mean your position as given by the GPS would be wrong by 10km after just one day! The atomic clocks on the satellites designed by Fruehauf are incredibly accurate, but they are specially designed to tick slower to counter these relativistic effects so that the time they keep while orbiting the Earth exactly matches the time of clocks on Earth.

So next time you rely on that blue dot on the map on your phone, remember it is thanks to geometry, relativity, and some incredible engineers lead by Parkinson, Spilker, Fruehauf and Schwartz, that the dot knows where you are!

This article is partly based on material from the new book Understanding numbers by the Plus Editors Rachel Thomas and Marianne Freiberger. The book will be published in April 2019!

Thank you, one of the best & clearest outlines of how GPS actually works, especially in relation to the relativistic effects!