Most people probably know that computers work on 0s and 1s. And, being electronic devices, it's also pretty obvious that they work on some kind of electronic circuits. But how do these things fit together and how do computers actually manage to perform their tasks?

To give you an idea of how it all works, let's look at a particular example: how you can get a computer to add up natural numbers. The first thing you need to know is that every natural number can be represented as a string of 0s and 1s: that's called its binary representation, as opposed to the decimal representation we're used to. It's not too hard to get your head around binary numbers — see here if you don't already know.

Starting with the right-most column, do the following for each column in turn:

Here's what happens when we do this for our example (we've included a subscript of 1 in a column if there was a carry of 1 from the right.)

The result is the binary number 11011, which is 27 as required. The process might look a little unfamiliar at first, but it turns out that it's the exact analogue of adding decimal numbers.

To get a computer to add two numbers, first notice that a binary number with n digits can be represented by a string of n on/off switches lined up in a row: the switch is on if the corresponding digit is a 1 and off if it's a 0:

Now imagine two rows of switches, one on top of the other, set so that they represent the two numbers you want to add. Each pair of switches in a column is connected to something called an adder (developed in the 1940s by the mathematician Claude Shannon) which we imagine as sitting right beneath the pair: 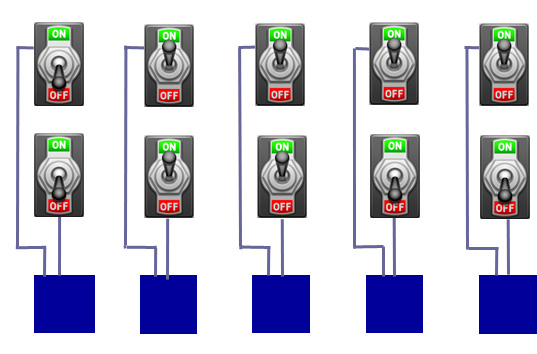 Each adder is also connected to its neighbouring adder, forming a snake of adders, and to a light bulb underneath. The position of the switches — whether they are on or off — will determine whether or not electrical currents reach the bulbs below and light them up. 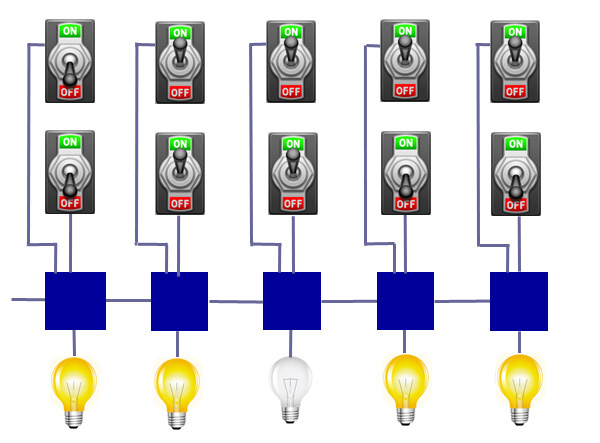 The idea is now this: remember that the two rows of switches represent the numbers to be added, written in binary. The adders now deal with electrical currents entering them in such a way that the result of the addition can be read off from the bulbs. If a bulb is on, write a 1, if it is off, write a 0. The resulting binary number should give you the sum you are after.

Let's think of each adder as working on three inputs. Two are determined by the two switches that sit above it and can be either on or off. The third corresponds to the input coming from the adder on the right and can also be on (if a current is arriving from the neighbouring adder) or off (if there isn't a current). This corresponds to the carry in the binary addition. To achieve the addition, each adder needs to do the following:

How can we get the adders to behave in this way? Each adder is made up of a number of logic gates. You can think of them as electrical circuits with gates in them (transistors to be precise). Depending on whether the gates are closed or open, an electrical current that is being fed to the gate passes through, or it is blocked.

There are two very important logic gates. The first is called an OR gate, shown below. Let's imagine the gates as being operated by switches. When a switch is on, the gate is closed, and when it is off, the gate is open. 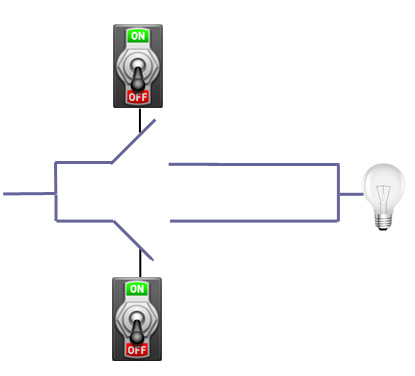 The second is called an AND gate and it looks like this: 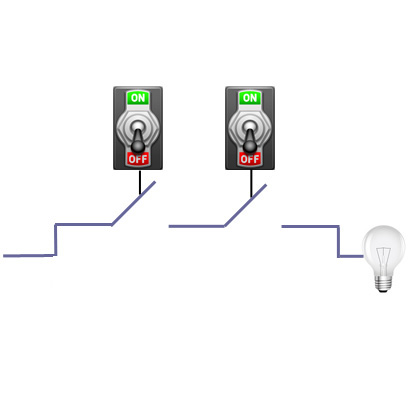 In this case, a current entering from the left only flows through to the bulb if the first AND the second switch are on, otherwise it won't.

Now suppose you connect two switches to two gates simultaneously, and add another gate, as follows: 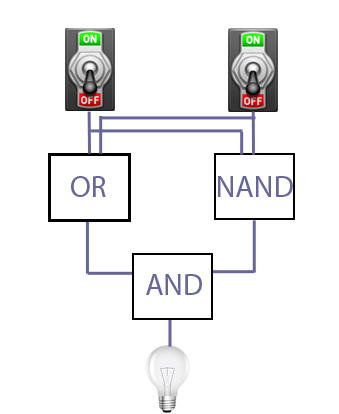 Let's see how the switches need to be set to light up the bulb.

So the bulb comes on if exactly one of the two switches is on. This configuration is called an XOR gate, short for exclusive or.

Now — hold your breath — let's wire our two switches to an additional AND gate as follows: 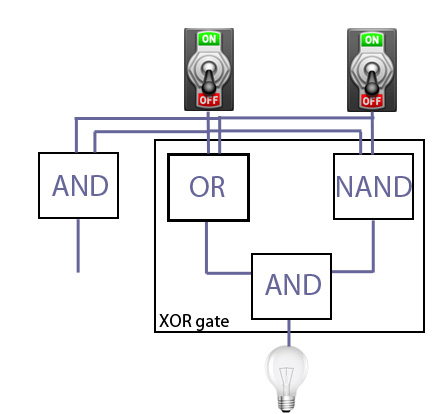 But how do we deal with a carry from the right, that is, with current coming from the neighbouring adder on the right? To do this, we include another half adder, wired up to the existing half adder, an additional OR gate, and to the adder on the right as follows (we have labelled the outputs from the half adders to indicate if they come from the XOR or the AND gate within the adder): 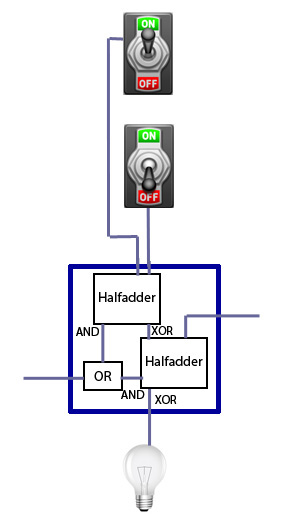 This is starting to look rather messy, but by doggedly following what happens to currents fed to the gates, you can see that the full adder does exactly the right thing. For example, suppose that one switch is on and one is off, and there's a current from the adder on the right of the one we are looking at. As we saw above, in order to implement the addition, the bulb should stay off and a current should be passed to the left. And this is what happens. The half adder wired to the switches passes a current to the second half adder, via its XOR gate. The second half adder also receives a current from the right, and therefore passes no current to the bulb via its XOR gate. The OR gate receives no current from the first half adder (via its AND gate), but it does receive one from the second (via its AND gate), which means it passes a current on to the adder on the left.

And this is it! This is how you can get a computer to add up natural numbers. The set-up may strike you as quite complicated for such a basic task. But the good news is that even more complicated tasks can be implemented using only AND and OR gates, and a NOT inverter (in our example this was coupled with the AND gate to produce the NAND gate). In fact, any computer algorithm can in theory be implemented using only a combination of NAND gates, or a combination of NOR gates (an OR gate followed by a NOT inverter).

Interesting article, thanks. One typo:

"But how do these things fit together and how to* computers actually manage to perform their tasks?"