Astronomers have for the first time listened to the heartbeat of a star other than our own Sun.

By analysing the light emitted from the star Alpha Centauri A, astronomers from the European Southern Observatory detected oscillations of the surface of the star caused by sound waves moving through its interior. Astronomers have listened to the heartbeat of the Sun since the 1970s and have been trying to take the pulse of other stars for many years. Similar to geologists' study of seismic waves in the Earth, Astroseismology, the study of the way seismic waves move through stars, can reveal the otherwise invisible stellar interior. 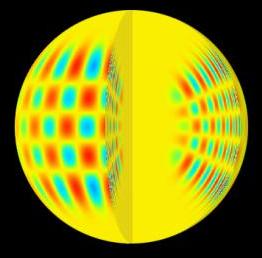 Acoustic waves in the interior of a solar-like star: red and blue colours show movements in opposite directions (Credits European Southern Observatory (ESO))

The nuclear reactions at the centre of our Sun generate enormous amounts of heat, and just as in a pan of boiling water, bubbles rising in the boiling gas towards the surface create noise. The sound waves are reflected between the surface and the centre of the Sun, creating resonant standing waves, and as the sound waves bounce off the surface they cause it to move up and down. Studying the way these acoustic waves move through the interior of the Sun has greatly enhanced astronomers' understanding of the dynamics and internal structure of this star.

Astronomers have naturally expected to see a similar phenomenon on other stars. However, it is very difficult to detect heartbeats in other stars due to the tiny movements that need to be measured over such vast distances. François Boucy and Fabien Carrier, Swiss astronomers from the European Southern Observatory (ESO), were measuring a movement in the surface of just 40m on a star with a radius of 875,000 km which is 4.3 light years away!

Bouchy and Carrier heard these acoustic oscillations in Alpha Centauri A, the closest star visible to the naked eye. The pulsations were measured in May this year at the La Silla Observatory in South America using the CORALIE spectrograph to measure changes in the spectrum of light from Alpha Centauri A. As the star pulsates, Doppler shifts occur in the spectrum lines of radiation emitted from the surface of the star (similar to the way a siren changes pitch as it passes you in the street.) As the surface moves towards the telescope the spectral lines become bluer (as they have shorter wavelengths), and become they become redder (longer wavelengths) as it moves away. By analysing the data from the spectrograph, the astronomers can detect the movement in the surface of the star and determine the frequency of the oscillations. 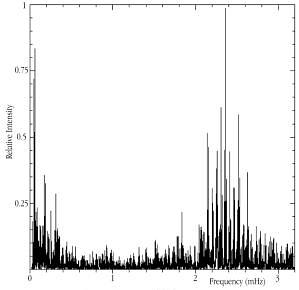 They used sophisticated mathematical techniques to convert the data from the spectrograph into a `power spectrum' which shows the intensity of the oscillations at different frequencies. The peaks between 2 and 3 mHz indicate a 'real' oscillation with a period of about 7 minutes. (The frequency of a wave is the inverse of its period, so if the frequency is 1mHz = 10-3Hz the period is 103 seconds = 1.66 minutes. )

Further analysis of this data gives a great deal of information on what is going on inside the star. By studying how the sound waves are moving the star, astronomers can determine differences in temperature and composition within the stellar interior: these conditions affect the speed of sound. Astronomers can build better theoretical models for the interior of Alpha Centauri A by comparing the predicted values with those actually observed.

Astronomers hope to use the CORALIE spectrograph to observe stellar heartbeats in other bright sun-like stars. ESO plan to install the even more powerful HARPS spectrograph at La Silla at the end of 2002, which will be able to observe stars that are 100 times fainter still. Astronomers at La Silla plan to listen to the beat of over 100 more stars using this new equipment.

For more details on helioseismology, the science of "quakes" on the sun, see the The dynamic sun in Issue 8 of Plus.