One day in the early 1950s two great physicists met in an office in Chicago. The first, Enrico Fermi, had conducted an unprecedented experiment observing the interaction of tiny particles that had only just been discovered. The second, Freeman Dyson, had found a theory that explained the observations. Having glanced at Dyson's results, Fermi put them down and said,"You know, there are two ways of doing theoretical physics. The first way, which I prefer, is to have a clear physical picture. The second way, which I've also used, is to have a clear mathematical formalism. You have neither." 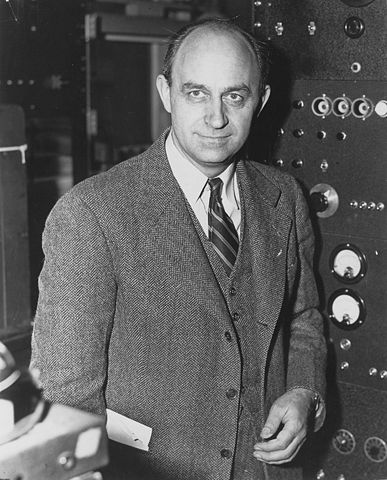 Harsh words, but as Dyson concedes, Fermi was 100% right. His words signalled the beginning of a long dark period for theoretical physics. At the beginning of the century physicists had known about two fundamental forces of nature: gravity and electromagnetism. By 1916 Einstein had described the first of these forces, gravity, which rules supreme over the macroscopic realm of planets, stars and galaxies. Taking lessons from Einstein's theory and quantum mechanics, physicists had also finally clinched the second, electromagnetism, describing the interaction of light and matter at very small scales. They had had to overcome momentous difficulties to do this (see here to find out more), but they had managed: the agreement between the resulting theory of quantum electrodynamics (QED) and experiment was excellent.

With that force now in the bag, the next on the list was a new one. In the 1930s physicists had discovered neutrons and worked out that together with protons these particles make up atomic nuclei. Since atoms don't tend to fly apart, something had to be holding these particles together against the electromagnetic repulsion, due to protons being positively charged. It was clear that gravity was not strong enough — there had to be another force, suitably dubbed the strong nuclear force. Then, in 1948, a state-of-the-art particle accelerator at the University of Berkeley, California, found that when protons and neutrons were smashed together, exotic particles emerged that had already been detected in cosmic rays. So while the door on QED had been closed with a satisfying click, a new door tantalisingly opened: the new particles, called mesons, and the strong interactions between them, had to be explained.

It was this task that Dyson had set himself, and given his central role in sorting out QED, you can understand his optimism. "I had an army of students and we were all full of enthusiasm," he recalls. "We were going to do for the nuclear force what we had done for electrodynamics. It was of course a heavy responsibility, because these kids all needed to write a thesis and their careers depended on this project succeeding."

Alas, Fermi's instinct turned out to be right. Dyson had used the tricks from QED, but the new context involved too many parameters that Dyson couldn't be sure about, for example the mass of a proton and how strong the strong nuclear force really was. He had chosen those parameters to fit the observations, but once there's too many parameters, there's so much wriggle room you can make anything fit. Thus Fermi quoted John von Neumann at him, "With four parameters I can fit an elephant, with five I can make it wriggle its trunk."

Yet the early 1950s were an experimental gold mine. As more powerful particle accelerators came on stream, particles previously only seen in cosmic rays were produced almost every week. But even their most basic properties were unknown. People tried to understand them, but soon there were as many theories as there were "styles of women's hats," to borrow a comparison the physicist Gregory Breit used at the time. The idea that made QED work, called quantum field theory, requires there to be one quantum field for each type of particle. "So it was not very appealing to even start the description of the strong interactions, if you needed such a complex witch's brew to even begin," says Frank Wilczek, who was to be, in the 1970s, one of the saviours of quantum field theory. But the bewildering zoo of particles wasn't the only problem. To calculate the outcome of even the simplest interactions between particles using quantum field theory, you need to add up sums with infinitely many terms (see here to find out more about the development of QED and its difficulties). In principle, such a sum can still have a finite result (for example, the sum 1+1/2+1/4+1/8+1/16+ … converges to 2). In QED people hadn't been able to prove that the infinite sums always have a finite result, but they hoped that they did, as successive terms contributed progressively less to the overall sum. This was because successive terms come with increasing powers of the coupling constant, which measures the effective strength of the electromagnetic force, as a factor. Since the electromagnetic force is relatively weak, the coupling constant is much less than 1: it is roughly equal to 1/137. This means that progressive powers of it, (1/137)2, (1/137)3, (1/137)4, and so on, very rapidly get smaller still. Because the factors in the terms further down the sum were so small, physicists ignored those terms in their calculations — and they were lucky, because the results they got in this way matched reality to a precision of several decimal places.

The strong interactions, however, were strong. Experiments suggested that the interaction strengths between particles were anywhere in the region from 7 to 57. This meant that successive terms contributed progressively more to the overall calculation; in fact they swamped it. This meant that the answer to your infinite sum would be infinite, rendering useless these so-called perturbative techniques, which sweep higher order terms under the carpet. Some people simply decided to fudge ahead with calculations anyway, in the hope they would come up with predictions that matched experiment. Edward Teller described this head-in-the-sand approach in verse:

From mesons all manner of forces you get The infinite part you may simply forget The divergence is large, the divergence is small In meson-field quanta, there’s no sense at all.

Fundamentally, though, people didn't have firm ground to stand on. "It wasn't a theory, that was the point," recalls Dyson. "It was an attempt to follow the rules of electrodynamics, and it was a situation where they didn't apply. So it was a mess, both physically and mathematically."

Dyson himself eventually turned his back on the area which had become "more like chemistry than mathematics". His last fling with particle physics involved a calculation in the mid-1950s, which predicted that a certain new particle should exist. "The great dream was of course to predict a particle and then have somebody discover it. So I did the same thing except that mine didn't exist. There were no such particles, and so I gave up."

It took another decade and two Nobel Prizes before the particle zoo was tamed. Find out how in the second part of this article.

Marianne Freiberger and Rachel Thomas are Editors of Plus. They interviewed Freeman Dyson and Frank Wilczek in February 2013. They are also very grateful to David Kaiser, a historian of physics at Massachusetts Institute of Technology, for an illuminating conversation and his excellent book Drawing theories apart.