After a gruelling 73 days each dragging 110kg of equipment in temperatures 40 degrees below zero, polar explorers Pen Hadow, Ann Daniels and Martin Hartley are now safely home in the UK spring sunshine. Despite the hardships they endured, including severe food rations due to delayed supply drops and equipment failures due to the extreme conditions, the team managed to manually take over 1500 measurements of snow and sea ice thickness over their 434km trek towards the North Pole. 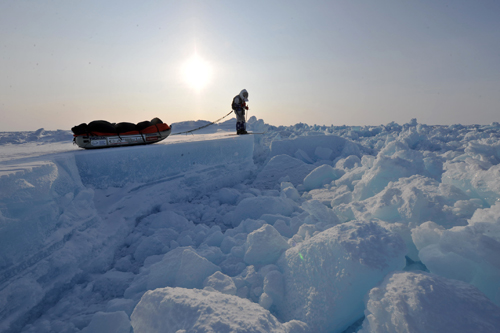 The Catlin Arctic Survey explorers covered over 400km on foot in gruelling conditions.

The aim of the Catlin Arctic Survey expedition was to produce a comprehensive set of sea ice and snow thickness data in the Arctic. However, failure of their measuring system meant the explorers had to rely on manual drilling to gather the data. Taking measurements for up to three hours a day slowed their progress across the ice, but they persevered and the data has already produced some surprising results.

The route was designed to take them over a variety of sea ice, from ice that refreezes annually to older ice that survives the summer thaw. Pen Hadow revealed that over the length of the survey the average thickness of the sea ice was 1.774 metres. "This seems to suggest it was almost all first year ice. Our science advisors had told us to expect thicker, older ice on at least part of the route, so it is something of a mystery where that older ice has gone. It'll be interesting to see what scientists think about this."

One way to understand the effect of decreasing sea ice is using an energy balance model. If you place a stone in a fire, the stone will heat up and start emitting energy in the form of heat to its surroundings. After some time the amount of energy it absorbs will equal the amount it emits, and the stone will be in thermal equilibrium. The majority of the Earth's energy is from radiation from the Sun, in the form of visible sunlight and other radiation. Energy balance models assume that, like a stone in a fire, the Earth is in thermal equilibrium and the amount of solar energy it absorbs is equal to the amount of energy it emits back into space.

However, the Earth does not absorb all of the 1.75x1011 megawatts of solar energy that arrives from the Sun every second. Energy is reflected from some of the Earth's surface, primarily from white areas such as the polar ice caps. The proportion of the energy that is reflected back into space is called the Earth's albedo, and has a current value of around 0.32.

The Earth radiates energy back into space in the form of heat, which depends on the average temperature across the globe. However, some of this energy is absorbed by the atmosphere in the greenhouse effect. The effect of the Earth's atmosphere is measured by the emisivity of the Earth — the ratio between energy that is radiated into space and the amount that would be emitted if the Earth had no atmosphere. The current estimate of the emissivity is 0.55.

The Boltzmann law relates the average temperature on Earth to the energy it emits as follows:

Here a is the albedo, S is the amount of solar energy, e is the emissivity, and T is the global average temperature in Kelvin.

While this is a simplified model, it illustrates the vital role the ice caps have in controlling the Earth's climate. More complicated models also predict the dramatic global consequences of the loss of Arctic sea ice. The data gathered by Hadow and his team will be fed into more sophisticated climate models and hopefully contribute to more accurate predictions.

We can only hope that more accurate data about the state of our planet will spur politicians and policy makers into action against climate change — the one thing the explorers' efforts have shown us, is that we are moving on very thin ice.