"Wise men say only fools rush in," at least according to Elvis Presley's 1969 hit I can't help falling in love with you. Wisdom is meant to come from our ability to learn from past experiences. We're supposed to make better decisions by weighing up future actions against the way we remember events playing out before. In short, we have agency. We can interact with the world and it can leave its mark on us.

A number of groups around the world are exploring the link between agency and the laws that govern the microrealm, quantum physics. In particular, the groups ask, would it be useful to think quantum mechanically? The work could help us build better artificial intelligences and improve our understanding of how natural systems evolve. It could also address a profound philosophical mystery about the nature of time: why do causes come before effects? 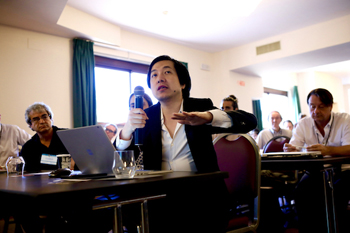 So what does thinking quantum mechanically mean? Famously in quantum physics, objects can exist in many states simultaneously — a particle being in two places at once, for example. This is known as a superposition of states. "Quantum memories can also record a superposition of several different possibilities at once," says Thomas Elliott, of Nanyang Technological University (NTU), in Singapore.

Elliott and his colleagues Mile Gu, also from NTU, and Jayne Thompson from the National University of Singapore, are exploring if it is advantageous for entities to exploit such quantum memories. For instance, could it minimise the space needed to store information about the past, yet still make good decisions about how to act? "Every intelligent agent leverages memories of past experiences to make decisions about future actions," says Gu, "Could an agent capable of processing quantum information exhibit more complex adaptive behaviour whilst recalling less information from the past?"

Together Elliott, Gu and Thompson are designing memory-efficient means that quantum agents can leverage to execute complex strategies. They then work out how favourably it compares to the best achievable with a memory obeying the laws of classical physics. Indeed, their preliminary research suggests that quantum memories can be significantly more efficient than those that can only process information with the classical physics of every day life.

The work has implications for machine learning, where an artificial intelligence searches for the optimal solution to a problem. Such protocols often operate like biological evolution, invoking a "survival of the fittest" mentality. If you have five approaches, you pick the best. Then you change it to create five slightly mutated approaches, pick the best and go again. Eventually you'll arrive at a highly-sophisticated solution. "We're investigating whether quantum memory can be applied to machine learning to potentially reduce learning times and boost strategy," says Elliott. "The more uncertainty in the outcomes of our actions, the more the quantum approach shines."

Eliot described the benefits of a quantum memory for agents at FQXi's 6th International meeting, in Tuscany, Italy, last year:

Might such an advantage also drive an evolutionary pressure in animals to adopt a quantum memory? It is a possibility, says Gu. In 1961, the physicist Rolf Landauer showed that each bit of wasted information also wastes extra energy. In the natural world "this would give an incentive to process information quantum mechanically," says Gu. "It does suggest the ultimate means to learn and adapt would exploit quantum effects." This is something that other researchers are investigating. But Gu adds that in living systems, other practical factors could offset quantum advantages.

Remembering the past is only one part of an effective agent — bit also has to interact with its surroundings. Other researchers are currently performing experiments to look into whether there could be a quantum aspect to such interactions. "A quantum agent may offer a more efficient way of learning about the world around it," says quantum physicist Gerard Milburn, at the University of Queensland in Brisbane, Australia. Alongside biomedical scientist Sally Shrapnel, also at Queensland, Milburn has been studying a simple picture of a quantum agent that has much in common with a bat. These flying mammals navigate using echolocation — sending out waves from their mouths and noses, picking up the waves as they reflect back towards them. Bats are thus able to learn about their environment from the way the returning sound waves have changed. 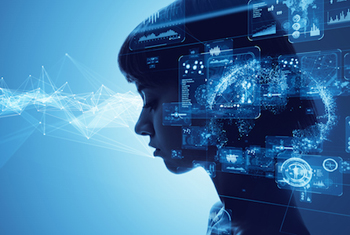 Could quantum memories and interactions have benefits for AI and in nature? Image: metamorworks

Milburn's quantum "bat" is a light source that sends out one photon at a time. (This is different to a laser pulse, which emits one photon on average, he explains.) Milburn's bat agent exploits a quantum outcome known as the Hong–Ou–Mandel (H-O-M) effect. Imagine two photons approaching a beam splitter from opposite sides. The splitter reflects half of all incoming photons and lets the other half through. If the two photons are identical then they always end up on the same side of the splitter after the experiment. The quantum agent creates two identical photons to exploit this effect, keeping one in its memory and sending the other out through the light source. The emitted photon is altered by its interactions with the world (just like a bat's sound waves) and is reflected back to be detected by the agent's sensors. The two photons are no longer identical and so don't end up on the same side of the beam splitter in the Hong-Ou-Mandel experiment.

The quantum agent then adjusts the properties of the photon held in its memory until the H-O-M effect returns, making the memory photon and detected photon identical again. "That means I know exactly how the world has changed the emitted photon," says Milburn. The quantum agent has learned about the environment around it just like a bat.

There are times when imaging the world around us one photon at a time is preferable to firing lots of photons at once. "Biology is a great example because often you don't want to damage the sample," Milburn says, and "one photon at a time is as low power as you can possibly get." It also has applications in espionage. Sources that emit single photons at a time also have the lowest intensity possible — great for covertly taking images of things without giving away the fact you're looking.

But the real focus of Milburn and Shrapnel's work is philosophical. There are a number of fundamental asymmetries in nature: That cause always comes before effect, for example. Or that memories are of the past but not the future. Thompson is also interested in these puzzles, and at an FQXi meeting in Tuscany, she spoke about causal asymmetry in the quantum world:

Philosophers fervently argue over whether we should think of causal asymmetries as objective features of the world, or alternatively as subjective properties of agents like us. Throw quantum systems into the mix and the waters get very muddy indeed. "Coupling these concepts with physics means we can tackle these questions in a concrete way," says Shrapnel.