Over 15 million lives were lost in the 1918 influenza pandemic, when a major genetic change in the virus took our immune systems by surprise. As we wait to see if the pneumonia-like SARS virus is going to become a global epidemic, research recently published in Nature helps explain the part genetic evolution has played in the deadly success of influenza. 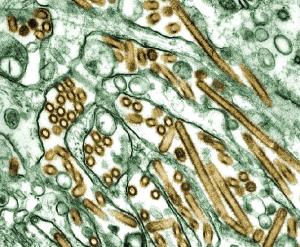 Researcher Neil Ferguson from Imperial College London, and colleagues from the University of California, have used a mathematical model to investigate the processes affecting the virus's genetic evolution and spread. The influenza virus has the ability to alter its outer surface to evade our bodies' immune defences, the resulting genetic variation leading to new strains of the disease through natural selection. But we do not see an ever-increasing number of strains of the influenza virus in existence, and it is this relative stability in the genetic variety that Ferguson and his colleagues sought to understand.

Their stochastic model (a time-dependent model that generates probabilities of future events) focused on individual hosts who were part of a geographically spread population, and incorporated chance genetic mutations of the virus and the resulting appearance of new strains. Keeping track of when individuals were exposed to and infected by influenza, and simulating how they moved in the population, the model estimated their chances of coming into contact with and catching each particular strain. It was this combination of genetic, individual and population information that made it possible for the researchers to investigate the genetic evolution of the virus, and the patterns of infection that result.

The model calculates the probability that an individual will come into contact with each given strain on a particular day, based on the contact rates between people in the geographically spread population and the infection rates for population at that time. Then the probability of that individual catching that strain is calculated, based on the person's infection history. This is the aspect that the researchers tinkered with, and that led them to propose that it is our immune response that keeps a lid on the number of new strains taking hold in the population.

The final element of the model is a simulation of the evolution of the virus, in which random mutations are allowed to occur at a genetic level with certain probabilities. Conducting this research without using mathematical simulations would be impossible, due to the size of the clinical trials that would be required to match the level of detail provided by the model. (Read more about modelling diseases in The mathematics of diseases from Issue 14 of Plus.)

Now the researchers think they understand how the genetic diversity of influenza is being limited - by the way our bodies respond to infection. The model suggests that, once infected, a person is temporarily immune to all strains of the virus, not just to similar strains as was previously thought, and this keeps down the number of strains successfully infecting the population.

Apart from helping us to understand the disease, Ferguson and his colleagues hope that models like this will help us fight it. If the global monitoring of influenza was improved, mathematical models could predict the impact of new genetic strains of the virus, giving us a head start on any future pandemics.