What can we agree to look for?

In 2012 science made the headlines with the discovery of the Higgs boson. The Higgs boson was the missing link in the standard model of particle physics, a mathematical description of the fundamental particles and their interactions. Although phenomenally successful in most of its predictions, the standard model could not explain why some of the fundamental particles have mass. The physicist Peter Higgs came up with a possible explanation in the 1960s, which predicts the existence of the particle that now carries his name. 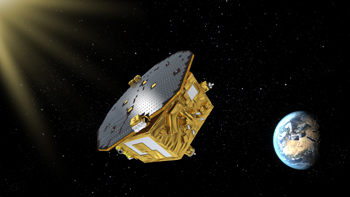 An artist's rendering of the Laser Interferometer Space Antenna (LISA), another huge scientific project which will be launched in 2030. Image: Credits: ESA/C. Carreau.

But discovering the Higgs boson took more than fifty years, thousands of people, huge sums of money and collaboration from countries around the world. The discovery was only possible by building the largest scientific experiment ever made – the Large Hadron Collider (LHC), a 27km long ring-shaped tunnel in which protons are made to collide at extremely high energies. These particle collisions produce Higgs bosons, and when it was finally observed in 2012 physicists had seen everything in the standard model. (You can read more about the discovery of the Higgs boson in What can science see and in The Higgs boson: a massive discovery, and about the LHC in Particle hunting at the LHC.)

There are already some contenders, in theory. "There's this theory called supersymmetry, which I've worked on a lot," says Ben Allanach, professor of theoretical physics at the University of Cambridge. "It predicts lots of new particles and it explains some mysteries about the Higgs boson that we don't currently understand. It seems like a really beautiful theory. When you really understand it, you feel in your heart of hearts that this has to be right." A lot of people agree with Allanach and many were expecting to see evidence for supersymmetry from the latest run of the LHC. "But the LHC hasn't seen these new particles yet. I'm kind of still expecting them to show up but they're late to the party, it's got to be said."

The problem might be that the supersymmetric particles are just too heavy for the LHC to produce. "You're always turning energy into mass at the LHC and vice versa. The LHC only has a certain amount of energy in it - you could only produce something that's about 6,500 times the mass of the proton." If the particle you want to observe is heavier than this limit, there is no way it would be observed by the LHC.

For the case of supersymmetry, the more you run the LHC and don't see the predicted particles, the heavier the particles must be to have been missed. As this happens people's view on the usefulness and beauty of the theory begin to change. "The thing is, the heavier you make these particles [in your theory], the less you solve the mysteries," says Allanach. "Taste [also] plays a role. At some point they're too heavy, and they don't solve this aesthetic problem that we have with the Higgs, and you give up. Many people have. Some of the rest of us think that's premature."

The obvious approach to this problem is to build a new, bigger collider with even more energy. But the limits to that aren't just technological and scientific. "It costs billions to run one of these big experiments. It involves tens of thousands of people. But for the foreseeable future, unless there's some major technological breakthrough where you can get huge energies out of some other technology, it looks like that's going to continue."

The problem is not just financial, it's also political. It takes the collaboration between scientific communities and governments of many countries to fund and build such projects. "You really need a worldwide collaboration. This is ulta-specialised, cutting-edge science, and you need the best scientists from around the world to be able to push this forward."

"That's quite a politically difficult thing to do, especially if you don't know what you're going to find." When the LHC was conceived and set up in the 1980s not everyone believed in the Higgs boson. "But we had this no-lose theorem: we'll find the Higgs boson, or something like it, with this machine. At the moment I'm working on a no-lose theorem for the next collider."

We've seen brilliant discoveries in the last decade – the Higgs boson at the LHC, gravititational waves at LIGO – thanks to huge collaborative experiments. New, bigger experiments are in the pipeline. The Laser Interferometer Space Antenna (LISA) is in development and set to launch in 2030. Allanach and his colleagues are building the case for a new, larger collider. Humanity, through science, is always pushing the limits of what it can observe. And what these new enormous experiments will allow us to see, we can't wait to find out!

Read more about...
The physics of observers
Tweets by plusmathsorg