Why are sunsets red?

The city of Santa Fe, NM, USA, lies at the foot of the southernmost range of the Rocky Mountains. It was founded in 1610 by the Spanish conquistadores as the capital of their northern territories in the Americas. They named the nearby mountain range the Sangre de Cristo mountains, meaning "blood of Christ". This name was inspired by the deep red glow that is cast over these mountains just before the Sun disappears below the horizon at the end of the day. But what is it that causes everything to turn red during a sunset?

Light is a mysterious phenomenon that seems to have a split personality. Sometimes it acts like waves and sometimes like particles. This two-faced phenomenon is known as the wave-particle duality. To understand why sunsets are red (or at least red-ish), we need to consider the wave-like behaviour of light.

In mathematics, a wave represents a regular oscillating motion over time, going from a high point to a low point and back, just like waves in the ocean. The figure below shows an ideal (mathematical) wave. There are two main properties that define the particular shape of a wave: its wavelength and its amplitude.

Mathematically, such a wave can be described by a sine function (sin):

is time (the horizontal axis in the figure), and the variable

is the vertical position (vertical axis) at any given time

determines the wave’s amplitude, and the parameter

its frequency, i.e., the number of wave peaks per unit of time. The frequency of a wave is inversely proportional to its wavelength. If you double the wave’s frequency (by making

twice as large), its wavelength will halve.

Sound and light as waves

The speed of sound in air at room temperature is about

meters per second. You can convert the frequency

by the wave’s frequency

. For example, the wavelength for middle C is

Finally, a sound wave's amplitude determines the sound's loudness. A low amplitude will result in a very soft sound, while a high amplitude results in a very loud sound. 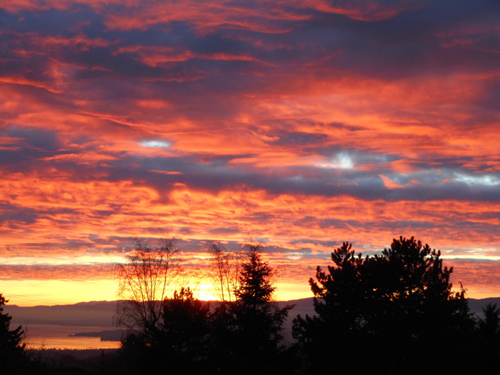 Now here is another mysterious thing about light. White light, such as that coming from the Sun, contains all wavelengths! This can be seen by shining a ray of sunlight through a prism, as beautifully illustrated in the image below. The glass of the prism, being of a different density than the air, causes the light ray to bend.

In the middle of the day, when the Sun is directly above your head, the amount of atmosphere that the sunlight has to travel through to reach you is relatively small (see image below). Thus the overall amount of scattering is also relatively small. However, at sunrise or sunset, the light has to travel through a much larger portion of the atmosphere (as illustrated below). Therefore, the total amount of scattering is also larger. 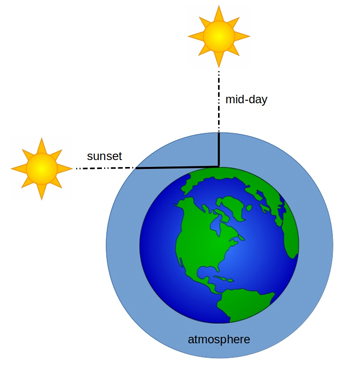 When the total amount of scattering is relatively small (i.e., during the day), the different scattering of shorter and longer wavelengths is hardly noticeable, as enough light of each wavelength will still reach you. However, close to sunset this difference does become noticeable.

And this is exactly why everything looks orangy-red during sunsets... 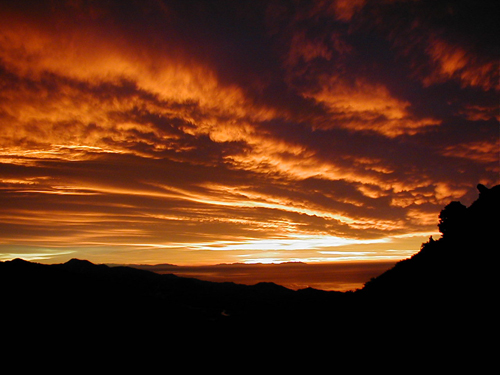