Time in a block universe

As much as we would sometimes like to (speaking as someone who has just cleaned up a glass of spilt milk) we cannot go back in time. For us, time marches relentlessly on. Which makes it so surprising that, according to the equations that govern fundamental physics, time doesn't only have to move forward, it could move backwards too. "In the mathematics everything is so beautiful and symmetric," says Marina Cortês, a cosmologist from the Royal Observatory, Edinburgh. "The fundamental equations [of physics] are reversible with time."

You can think of this as watching a film playing forwards or in reverse. Watching a video of some events, such as my spilling a glass of milk, it's easy to tell when the film is running forwards in time (and the mess ensues) and when it's running backwards (when all the milk leaps back into the glass). But this event is the culmination of many physical processes each governed by different equations: such as those governing the gravity and the force I applied to the glass and its contents, and the fluid dynamics governing the behaviour of the milk itself.

For some very simple systems, physics has no preference for time moving forwards. Can you tell which parts of this film are being played forwards, and which in reverse?

But at a fundamental level of physics, for example at the level of Newton's laws of motion that you learnt in high school, things start to look a little different. Suppose you move an object by applying a force. Then by Newton's second law of motion, an equal force applied in the opposite direction will reverse the motion. If you were watching a film of the object's motion, say a ball gently rolling across a floor, you wouldn't be able to tell if the film was playing forwards or backwards. Fundamental physics has no preference for time moving forwards.

Symmetry of time is one of the underlying arguments for the block time. Block time is all of time – the past, present and future – existing in a four-dimensional block of spacetime known as a block universe. If we live in a block universe, our perception of time as only ever moving forward at a steady rate is just an illusion, a "mathematical artefact of the physics". This might sound surprising but this counterintuitive concept of block time is a direct result of one of the most successful theories of physics: Einstein's general theory of relativity, accepted by the scientific community as the most accurate description of the true nature of the Universe at the cosmological scale. (You can read more about block in in the article What is is a block universe?)

But the symmetry of time is a point of contention for Cortês and other physicists. "It feels to me that physicists are hunched over their desks looking at these notes [covered] with mathematics, and they have their backs turned on the world." No other subject in science has time-symmetric equations. "Chemistry, biology, [or going further to] psychology or economics – for every subject there's a very well defined direction of time."

The equations of general relativity describe the physics of the Universe we live in, but ours is not the only possible one. There are lots of different solutions to the equations, each describing a possible universe. The symmetry of the equations of general relativity means that some solutions describe a universe where time increases, or goes forwards, and some solutions are for where time decreases or goes backwards. This symmetry is one of the underlying principles of block time – there is no past, present or future – all time exists within the block universe.

"There are very unsatisfactory explanations for why we throw away, by hand, the solutions that say time is decreasing. The common explanation is to say time is moving forward because [our Universe] started in the Big Bang, which was a very special state [for the Universe to be in.]"

This justification for the preference for solutions where time increases, and so an explanation for our personal experience of time as only ever going forwards, comes from the second law of thermodynamics. This law says that entropy (a measure of disorder of a system) always increases – there is an inescapable transition from order to increasing disorder. (You can read more in this Plus article.) 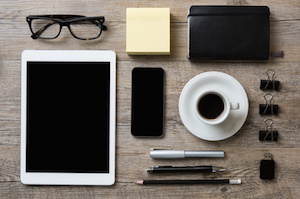 One of our favourite metaphors for this is our messy desk in the Plus office. Every now and again our colleague Owen despairs of our untidiness and throws everything from our desk in the bin, bar for an ordered pile of papers and books. We could keep our desk in this highly ordered state, by expending a lot of energy tidying our papers, putting our pens away and binning our many coffee and tea cups. But as we'd rather spend our energy talking to interesting people like Cortês about interesting things like block time and block universes, our desk inexorably slides into messiness, neatly obeying the second law of thermodynamics.

The second law of thermodynamics gives us an explanation for processes that seem to be irreversible. Most irreversible processes we experience can be explained by the system starting off in a highly ordered state that has very low entropy. When you first open a packet of cards they are neatly ordered into suit and numerical value, but with each shuffle, they become more and more disordered. You cannot imagine shuffling them back into the exact order they started – that would be incredibly unlikely! Instead you'd have to put in the energy and sort the cards out again, one by one.

Similarly our universe began in a highly ordered state – the Big Bang. "It's almost like saying all the oxygen in a room, instead of being spread around the room homogeneously where everybody can breathe it, all the oxygen molecules are concentrated in a tiny corner of the room," says Cortês. "After that initial time [the molecules] will spread around in the room because that's the only way they can go – they can't get more compressed as the entropy [they started with] was already so low."

You can think of the entropy in terms of probabilities: the system being in such a highly ordered state is very unlikely. When left alone the system naturally progresses to more likely less ordered states. "There's no reason for [all the molecules to be in one corner of the room] because the most likely state is that they're all distributed," says Cortês. "It's a very unlikely state for the molecules to be in." And if you found a room in such a state you would naturally ask, why did the molecules end up there?

The same argument can be used to explain why time is moving forward in our Universe. "Time is moving forward because we started in the Big Bang, this very special state," says Cortês. The conditions of the Big Bang can be likened, metaphorically, to our example of all the oxygen molecules in a room starting off compressed into a little space in the corner. "The specialness of that state, is so unlikely it has a probability of around 10-90," she explains. (A probability of 10-90 can be written as 0.000..00001%, where there are 87 zeros between the decimal place and the 1.) Another way of explaining this is that there are 1090 ways that a universe could have started and only one of those states gives rise to our Universe. In fact for all the other possibilities we wouldn't be here. "And the specialness of that state then explains why time has always been moving forward," says Cortês: the Universe is simply following the second law of thermodynamics. "The entropy's increasing, and essentially that's time."

So, in the block time view, the forward movement of time in our Universe can be explained by the fact that our Universe began in such an unlikely state. Going back to our metaphor of molecules in a room: their behaviour is understood using laws of movement that are all time symmetric. The asymmetry in time comes from the molecules starting all in one corner. Similarly our Universe is governed by time symmetric equations, but its beginning in the Big Bang leads to what we experience as an asymmetry in time. There's no going back in our block universe.

Read about alternative theories where time is fundamental in the next article...

Direction of Time in Classical Mechanics

"If you were watching a film of the object's motion, say a ball gently rolling across a floor, you wouldn't be able to tell if the film was playing forwards or backwards. "

This is not quite true. If the observer had sufficiently accurate measuring instruments, they would notice the ball's energy changing due to friction as it rolls across the floor. This change of energy will tell the observer which direction the film is running. If the energy is increasing the film is running backwards. As there are no frictionless surfaces in the real world, we can always find the direction of time.

The error in thinking you are making is deciding which equations describe the "real" we live in and which describe Plato's cave - a world we do not inhabit.

"If you were WATCHING a film of the objects motion....." In this case a rolling ball. The statement was about observation, and not the kind of looking that includes any instruments other than the human eye. If Time is symmetrical, why is the energy expended by the ball asymmetrical ? This is the "Heat lost equals Heat gained" of High School physics. If some how the floor could impart energy to the ball as it rolls, it would keep rolling and your instruments would not detect it and you would not know which direction the ball is moving relative to it's "Starting" position. Time is symmetrical, therefore you have just as much chance of being in the future as you do being where you think you have already been. The only thing that convinces us is that we do not move backward and forward in time, is memory. If we do move backward and forward in time, so does the memory of this passage and therefore, like the ball, you have no idea if you are coming or going. This is like Plato's Cave...a case of limited perception, from the anchor of memory. Since we don't remember repeating the past, we don't know if we have.

That's 87 zeros, not 89, due to the percent sign. Not that it matters much with this specific number, but it's still a hundred times off and reflects a systematic error, and on a website on maths it kind of matters.

When it's corrected, you are welcome to delete this comment.

Too many square brackets insertions into direct quotations. That’s really annoying to me.