To coincide with the 100th International Women's Day two new competitions to find the best young female mathematical minds in the UK and Europe have been launched.

The European Girls' Mathematical Olympiad (EGMO) will be held for the first time in April 2012 at Murray Edwards College at the University of Cambridge. Countries will send their four best school-aged female mathematicians to the Olympiad to compete against their peers from across Europe. The competitors will try to solve eight very hard problems during 9 hours of examinations over a two day period. This will become an annual event being hosted by different countries in Europe every year.

This new competition is inspired by the very successful China Girls’ Mathematical Olympiad (CGMO) which has encouraged many more girls to develop and pursue their interest in mathematics. This competition now attracts many international entrants and in 2010 the UK sent a team returning with one bronze and two silver medals. "It was a fantastic opportunity to do interesting problems with like-minded people in an intellectually challenging environment," says Maithra Raghu, one of the members of the UK team. You can see the mathematical challenges the team faced and even try your hand at some of the problems from the 2010 CGMO. 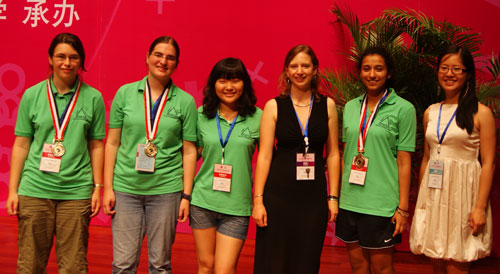 There will be a nationwide talent search to find the girls to form the UK team at EGMO 2012. A Competition Challenge (the UK Mathematical Olympiad for Girls) will be held in June 2011 to select those students who will engage in training for the competition.

In addition to being a brilliant event because of the opportunity of interacting with people with similar interests, the CGMO stood out, says Andrea Chlebikova, another member of the UK team. "The fact that the fellow competitors in this case were girls, and that the olympiad was an international event, meant it was even more of an enriching experience." And EGMO will provide more girls in UK and the rest of Europe with this exciting opportunity.

This new Olympiad, EGMO, is a joint initiative between the UKMT and Murray Edwards College. “Murray Edwards College pursues talent and provokes potential, " says Dr Jennifer Barnes, President of the College. "We look forward to welcoming the next generation of the brightest mathematical minds from across Europe to the College.” The participants will join the growing ranks of brilliant women mathematicians from across the world, and Plus is looking forward to reporting on their successes.

You can find out more about the competitions at the EGMO website and about other Maths Olympiads at the United Kingdom Mathematics Trust (the UKMT).

Read more about...
public understanding of mathematics
women in mathematics
Tweets by plusmathsorg