Maths in a minute: "R nought" and herd immunity 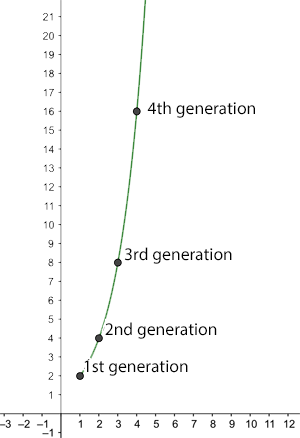 The number of new infections after n generations for R0=2.

Given an infectious disease, such as COVID-19,

is the basic reproduction number of the disease: the average number of people an infected person goes on to infect, given that everyone in the population is susceptible to the disease. For COVID-19 this is currently estimated to lie between 2 and 2.5. For seasonal strains of flu, it lies between 0.9 and 2.1. And for measles it is a whopping 12 to 18.

You can see how a large enough

leads to a rapid spread of the disease. For example, if

is equal to 2 then a single infected person generates the following growth of new infections:

new infections in the

th round of new infections. Assuming a person is only infectious for a week, at this rate the entire world population (7.8 billion) would be infected after slightly over 32 weeks.

When the basic reproduction number

is less than 1 a very different picture emerges. As an illustration, imagine we have

new infections in the

th round of infections. This number becomes smaller and smaller as the number

of generations becomes larger. A dead end for the disease. 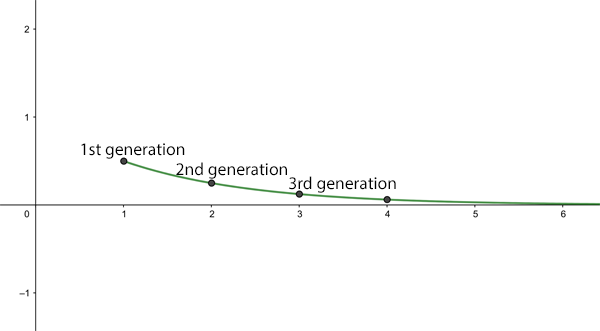 The average number of new infections after n generations for R0=0.5.

? In this case the disease will be endemic: always present in the population, but not an epidemic.

So, given that the

of measles, or some strains of seasonal flu, is greater than 1, how come the whole world hasn't been infected with these diseases a long time ago? The reason is that

is the average number of people an infected person goes on to infect, given that everyone in the population is susceptible. In real life, this might be the case if someone who has become infected with a disease elsewhere enters a part of the world where the disease has never been seen before, so people don't have immunity and there isn't a vaccine to protect them. An

then means that, at the beginning, the number of infected people will grow wildly, as we've described above.

In most real life situations we should be looking at the effective reproduction number of the disease, sometimes denoted by

: the average number an infected person goes on to infect in a population where some people are immune (or some other interventions are in place). Of course

for the proportion of the population that is susceptible to catching the disease, we have

As an example, if only half the population is susceptible, so

and the disease won't turn into an epidemic. The ideal aim of any intervention, be it vaccination or social distancing, is to get the effective reproduction number down to under 1.

What does all this have to do with herd immunity? The general idea behind herd immunity is that in a population where many people are immune a disease can't take hold and grow into an epidemic, thereby protecting people who aren't immune. The population (perhaps unfortunately called a herd ) protects vulnerable individuals.

So how many people in a population need to be immune to have herd immunity? Imagine a disease has a basic reproduction number

, which is greater than 1 so an epidemic threatens. As we have seen, if the effective reproduction number

is less than 1, then the disease will eventually fizzle out. So to achieve herd immunity we need to somehow get the effective reproduction number

is the proportion of the population that is susceptible, we need

In other words, we need to get the proportion of susceptible people in the population to under

How many people need to be immune to achieve this? If the proportion of susceptible people is

, then the proportion of people who are not susceptible, in other words immune, is

So, to achieve herd immunity we need to make sure that at least a proportion of

of the population is immune. For an

of 2.5, the higher end of the estimates for COVID-19, this means that we need to get at least a proportion of

of the population immune. This translates to at least 60%. 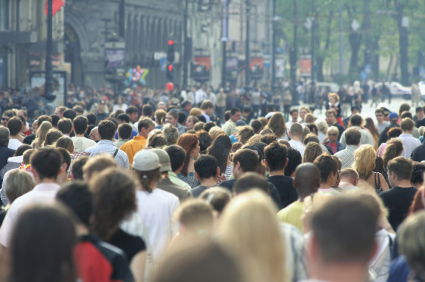 The herd can protect the individual.

How do we do this? Well, ideally we would do it by vaccinating at least 60% of the population. In the absence of a vaccine, we can hope that this level of immunity will be achieved naturally, by people becoming sick and then immune. But because a lot of people die of COVID-19 we can't just let the disease wash over the population, confident in the knowledge that more infections mean more immunity.

It's because we need to protect vulnerable people and our health care systems that much of the world is currently in lockdown. Ironically, lockdowns mean that many of us are not gaining immunity by having been infected, so the epidemic may spike again once social distancing measures are lifted.

So what are we to do in this worst case scenario? One option would be to remain in lockdown until there is a vaccine, but that could be over a year. Another is to go into intermitted lockdowns to keep successive spikes of the epidemic below the critical capacity of health care systems.

The truth is that at this moment nobody knows exactly what is going to happen in the future. Our most educated guesses come from mathematical models which try and predict the course of the pandemic. You can find out more about these models here. An urgent call has gone out to the scientific modelling community to help find the best exit strategies from our current predicament.

In general, our calculations above also send an important message about vaccination: it does not only protect the individual who is being vaccinated against the disease, but also those people who for some reason or other won't be vaccinated and are therefore vulnerable. Vaccination isn't just for you, it's for the whole "herd"!

This article is based on a chapter from the book Understanding numbers by the Plus Editors Rachel Thomas and Marianne Freiberger.

Maths in a minute: "R nought" and herd immunity

This article by Marianne Freiberger is by far the clearest and most illuminating introductions I have read in my quest to understand the mathematical modelling of the spread of the Covid-19 disease. I now feel more confident in reading more detailed articles, such as those describing SIR models.

How is "crowd immunity" calculated when R0 < 1?

When R_0<1 you already have

Permalink Submitted by Marianne on May 1, 2020

When R_0<1 you already have herd immunity from the outset.

Permalink Submitted by Tatjana on May 3, 2020

When R0<1 it doesn't mean you have "herd immunity from the outset", it just means the virus has a reproductive rate less than 1.