The simplicity and symmetry of Rhodonea or rose curves have fascinated mathematicians since they were first named by the Italian mathematician Guido Grandi in the 1700s. We were fascinated by an interesting pattern created by counting the number of petals of these curves.

Rose curves are not drawn using the

: the distance between the point and the pole (the pole is another name for the origin

is often referred to as the radius). The second of the polar coordinates is

(read as "theta"): the angle formed by a ray (beginning at the pole extending to the point) and the polar axis (essentially the

-axis). (You can read more about how to draw curves with polar coordinates in the article Polar power.)

The rose curve has the general equation of either

is a non-zero real number and

is an integer. You can see what happens with different values of

in the example below. An interesting pattern emerges as you increase the value of

is even, there are

petals on the rose, and when

petals. This pattern emerges if

is any integer, including if

was negative. We will explore the maths behind this interesting pattern and we will see that this is always the case for the number of petals for a rose curve.

Let me count the ways

To begin explaining this pattern we must take a look at the equations that produce these curves. Suppose we examine

. Using our knowledge of trigonometric functions like cosine, we know that

Thinking about what this means for the rose curve drawn in polar coordinates, the peaks of the petals are those points on the curves that are furthest from the pole; those points are where

. Looking at the rose curve

reaches 1 or -1, corresponding to the peaks of each of the petals. 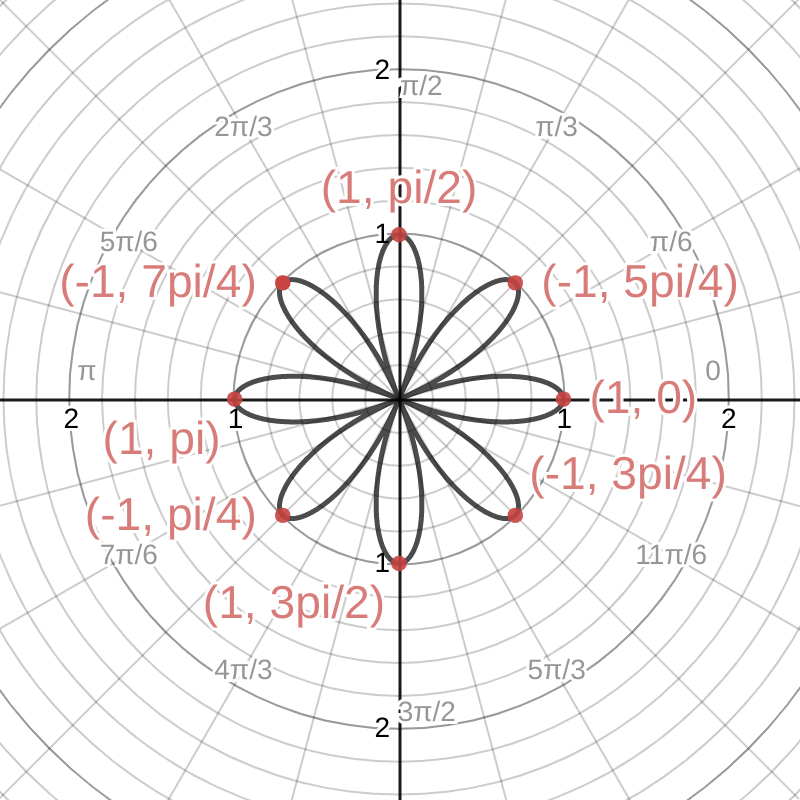 The rose curve The graph of y=cos(4x) (where r=1, n=4) drawn using polar coordinates. The peaks of the petals correspond to the peaks and troughs of the cosine graph above.

create a peak? Or in other words, which values of

. So the peaks of a rose curve occur when

is some multiple of

Putting this mathematically, the peaks of the petals occur when

is an integer. However, we are only considering values of

. That's because the angle defined by

we are redrawing our rose.

is the values of

With some simple rearrangement we can find

. So for each of the

itself, as this is where the curve starts repeating itself) we get a peak of a petal on the rose curve. That would seem to imply there are

petals on a rose curve!

However, this seems to contradict our initial observation, that when

petals. To understand why this is not a contradiction, we must do some casework.

. Taking all the values of

, we get peaks when

giving the list of the polar coordinates for the peaks:

We see that anytime that

is odd, the first coordinate of these peaks is negative:

is the same point as

Thus for our list of the peaks of the rose curve, for those with a negative first coordinate

to the second coordinate and switch the sign of the

, and the points these new coordinates describe will still be equivalent:

So we can rewrite our list of peaks as follows:

After rewriting our list of peaks of the rose curve, we have peaks at

is an odd number when

is odd. So the rewritten coordinates

. Thus we end up with

You can see eight distinct petals of the rose curve

If we try the case where

is odd, we get something very different. When we list out the values that produce the peaks, and transform them such that all the radii are positive, we don't get

is odd for the negative radii, and

is odd as well, then the number

is even. However this means that the rewritten coordinates

for some odd value

are just one of the coordinates

we've already listed for some even value

! Therefore, each point is duplicated once and exactly one. Thus, instead of

You can see the overlapping petals for the rose curve

We've explored this pattern for rose curves described by

, but the same line of reasoning explains the pattern for curves described by 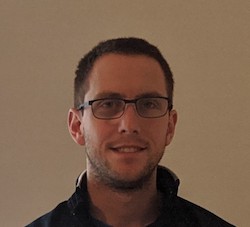 John Eckhart is a former High School Honors and AP mathematics teacher who has an interest in analytic geometry. He currently works as an education specialist at Marshall Space Flight Center. 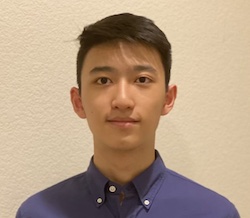 Frank Lee is a high school junior at Sylvania Northview High School (Toledo, Ohio) who enjoys geometry. Challenged by his precalculus teacher to come up with a proof for this neat pattern found in rose curves, he found something equally neat

Nice article and use of desmos - thanks!