Latitude by the stars 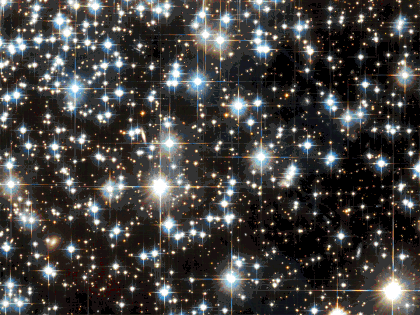 Finding your latitude by the stars. Image courtesy NASA.

How do you find your way around the world? GPS? Well what if you haven't got reception? A map? Good idea, but what if you're travelling on the high seas with no land mark in sight? That's a situation that many, many people have found themselves in over the millennia. These brave seafarers used the Sun and the stars to navigate instead. And to do this, they needed a fair bit of geometry, in particular trigonometry.

Suppose you are on the open ocean and you want to work out your latitude (see here for a definition of latitude). The Sun and most of the stars change their position in the sky over time. But some stars always appear to be in the same place. An example is Polaris, also called the North star, which always appears to be sitting directly overhead the North pole. It turns out that your latitude is the angle at which Polaris appears to sit above the horizon.

To see why, let’s look at a two-dimensional picture. Consider the plane that contains the North pole, the point

you are sitting at and the centre

of the Earth. Strictly speaking, Polaris doesn’t sit vertically above

, as shown in the picture, but it is so far away that the line of sight from

to Polaris is very nearly vertical, so we can pretend that it does. 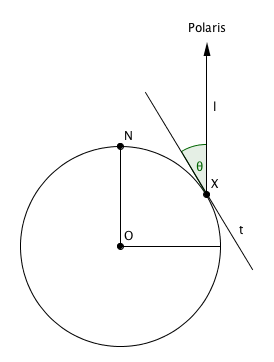 The angle that "Polaris sits above the horizon" is the angle

indicated in the figure. It’s the angle our line of sight to Polaris, call it

, forms with the line

that is tangent to the Earth at the point

(that’s our line of sight towards the horizon).

, we see the angle

again on the other side of the crossing point 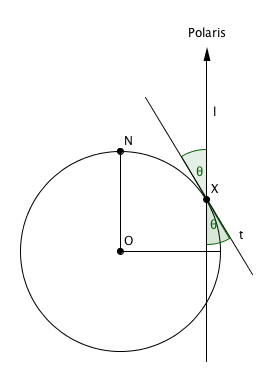 is defined to be the angle

makes with the plane containing the equator. In our two-dimensional picture, that equatorial plane is just a horizontal line

It meets the vertical line

and the tangent line 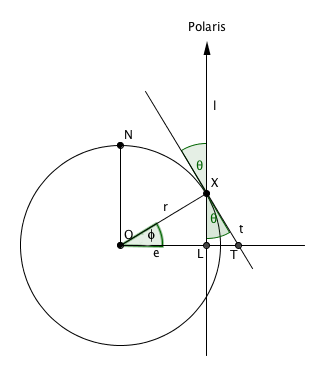 a tangent, we know that

form a right angle at

we know that the angle between 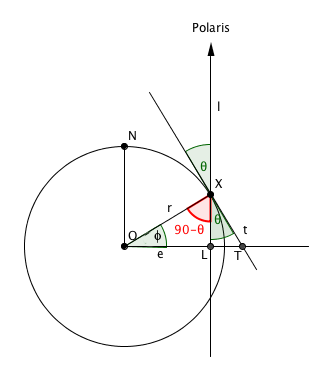 Now consider the triangle with vertices

As we have just seen, the angle at

horizontal, the angle at

. And because angles in a triangle always add up to

, which is our latitude, is 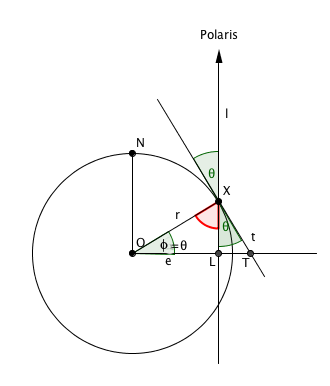 Et voilà — your latitude is given by the angle

Polaris sits above the horizon. The Greek astronomer Hipparchus defined latitude in this way over 2000 years ago. He didn’t even know that the Earth was round, but our little picture here should explain why Hipparchus’ definition agrees with the modern one.

Over the millennia navigators have used different devices to measure the angle at which a star appears above the horizon. These include beautiful astrolabes and sextants, which you often find in antique shops and museums.

That sorts out latitude, but how do you work out your longitude? That's another story.

latitude by the stars ----longitude etc

Permalink Submitted by Anonymous on June 20, 2015

Ok, but thats half the world. How do you find latitude in Southern Hemisphere?