John Milnor: A conversation with a mathematical legend

One of the highlights of the International Congress of Mathematicians (ICM) was the opportunity to meet a true mathematical legend. His name is John Milnor, and he's won several high-profile prizes over the years, including the Fields Medal in 1962 and the Abel Prize in 2011. Apart from his work in mathematics, he's also famous for his writing, which has inspired generations of students. And at 84, Milnor is still going strong.

We went to a press conference Milnor gave at the congress to a collection of journalists, which we have recorded for you. You can listen to it as a podcast or read this transcript. The first question was... 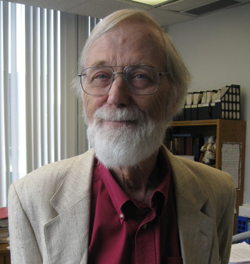 Question: Why did you choose to do mathematics?

Answer: Because to me it was easier than other subjects. I'm very lazy, you see; I do what's easiest for me.

Question: You were only 19 years old when you proved your first influential result in mathematics, in the area of knot theory [see here for more]. When did you start working on complex mathematics?

Answer: I guess I've always liked working on concrete problems. This was a problem that the professor described in class, and it was a very intriguing one, and so I started thinking about it. I mean I'd clearly already been studying mathematics for a few years at that point, so I had some idea of the kind of methods that might work, but of course there's always more to learn in mathematics. There's a famous English book, written by Lewis Carroll, about the Red Queen, who has to keep running to keep up with where she is. That's what a life in mathematics is like; we have to keep running.

Question: How do you manage to continue producing important mathematical results even though you are getting older and older?

Answer: Well, I've noticed I'm getting older. It's getting harder, but it's what I love to do, so I try to keep up, and still look at interesting questions. Of course it's well-known that mathematics is a young man's game, so I'm very grateful if I can still make some contribution.

One of Milnor's most important results was the discovery of so-called exotic spheres. These are strange shapes that live in higher mathematical dimensions. You can find out more about them here. As the name suggests, mathematicians hadn't expected these strange shapes to even exist before Milnor's discovery, so we asked...

Question: Had you been looking for these strange objects, or did their discovery came as a surprise to you?

Answer: It came completely by accident, as far as I was concerned, and I was very confused. I was just looking at the same problem from two different approaches and got contradictory answers, and I didn't know where I'd made a mistake. Finally the only resolution was to find that an assumption that I'd been making, that everyone had been making, was wrong.

Question: Which moment in your mathematical life remains most vivid in your memory?

Answer: Well, I suppose the most dramatic thing was the [discovery of exotic spheres]. This was a once-in-a-lifetime kind of experience, that just something was wrong and I couldn't figure out what it was, and was rather amazed when I finally figured it out. In general I've simply been very lucky; I've had a long life and reasonable health most of the time, and since I love mathematics, I've just dabbled a little bit in different kinds over the years, and mostly it hasn't been any particular moments which were special, but I've just enjoyed the general process.

Answer: Dynamical systems basically are the study of systems which change with time according to some mathematically understandable rule, and this includes many different kinds of science. Some of the people who first started interesting currents of thought in dynamics were astronomers, meteorologists, chemists. Because it's common to all parts of science that you want to know, given the past, what is the future going to be? You want to find rules, if they exist.

In some sciences, like physics and chemistry, there are very clear rules. Or meteorology; they can be very complicated, but they're amenable; if you can find exact descriptions of what the rules are, then you can try to analyse them mathematically.

In other fields, such as anything involving human choices: history, psychology and so on, it's much harder to apply mathematics, but mathematical tools are still of great interest. Financial mathematics is an example where mathematical tools can be applied with great difficulty, and if they're applied badly they can lead to disaster. But it's still important to try to understand what the rules are, to what extent they're consistent and how to apply them.

Dynamics is evidently a very big field. I've tried to tell you that dynamics is a very general subject which can be applied in many different areas. I certainly don't want to make it sound as if I am contributing to all of these areas; I work in a much more narrow part of the field, just trying to understand very simple mathematical models which give rise to complex behaviour, but, well, there's room for research at all levels.

Many physical systems are extremely complicated; the only way to analyse them is by computer experiments with very fast, large computers, but one can often get ideas of general principles from studying much more simple systems, and that is the kind of approach I do. More driven by mathematical curiosity, and trying to understand some of the simplest systems, which even though they look simple, can induce very complex behaviour; difficult to understand. [You can find out more about dynamical systems and the difficulties of predicting their behaviour here.] 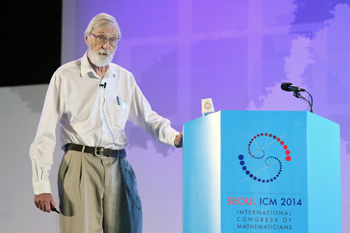 Question: Is mathematics something that is already out there and which we humans discover, or is it something we invent?

Answer: Well, this is a very old question. I suppose one way of examining it is to look at the historical record of the way mathematics has developed in different parts of the world. I think there was a long Oriental tradition of mathematics, especially in China, which was largely independent of Western mathematics. They were not so different that we were unable to communicate with each other, but certainly the language one uses, the precise way one phrases things, depends very much on individual choice, which tends to change with time.

I've been trying to prepare a lecture describing mathematics 150 years ago, and it's very hard to read these things, because the words meant very different things, then, when the concepts have been developing. What can I say? I think you can't get a definite answer one way or another. There are consequences you can derive from reasonable hypotheses, and those should be the same no matter who develops them, but the precise way you phrase things, the basic concepts you use, may be different.

Question: How can we teach young mathematicians and scientists to write as well as you do?

Answer: I think most of my writing has been just driven by the desire to understand something. I find that to understand something I have to write it down, and if I write it down clearly enough so that I can understand it then there's some hope that other people would be able to understand it too, I think, but it takes a great deal of care to translate an idea into words, so that I typically have to write things over and over again. When I was young, before we had computers, I used to drive secretaries crazy, because I would write a manuscript, they would type it, and then I would cross out this, substitute that, move things around and ask her to type it again. Then the next week the same thing would happen again; I'm sure they hated me. Nowadays it's easy on a computer to shift things around, cross out, and it becomes much easier.

There are some people who can just sit down and decide what they want to do; write it out. I think a mathematician called Serge Lang was proficient at this. He would have an idea, think about it, sit down at his typewriter and type a book and send it off to the publisher. It's not the perfect way to do things; I'm sure the books could have been better, but he covered an awful lot of material in a quite useful way.

Now, I can't work that way; I have to make a first attempt, and then when I read it, it looks awful, and I have to rewrite and change it. Sometimes there's the terrible feeling when one rewrites over and over and then looks back at the first version and notices it was much easier to understand.

You can also listen to this interview as a podcast. See here for all our coverage from the ICM 2014.