This year the Isaac Newton Institute for Mathematical Sciences (INI) in Cambridge celebrates its 30th birthday. The INI gives mathematicians from around the world a place to come together to focus on their chosen area of maths for extended periods of time. All types of mathematics are covered and the focus is on interaction and collaboration. Affiliated to the INI is the Newton Gateway to Mathematics, which brings mathematical advances to where they are needed — industry, business, the public sector, and other scientific disciplines — by stimulating the exchange of knowledge and ideas. 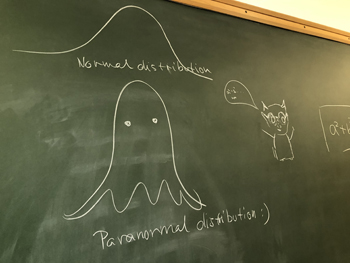 A blackboard in the ladies' bathroom of the Isaac Newton institute.

When the INI was founded thirty years ago the world of mathematical research was very different from what it is now. As INI Director Ulrike Tillmann pointed out at the INI birthday celebration in June, the internet as we know it now didn't exist back then. There were no search engines, no way of quickly looking up the latest mathematical results, and certainly no video calls. Frequent trips to the library were the norm, and if people couldn't meet in person, they had to write each other letters.

What hasn't changed in these thirty years is the fact that maths is a social activity that thrives on collaboration. And as we all know after the pandemic, nothing beats face-to-face interaction. The INI has been designed to enable that. Apart from offices and seminar rooms, it provides mathematicians with spaces for informal chats and limitless tea and coffee — and yes, there are even blackboards in the bathrooms. Wandering in on a typical (non-pandemic) day you might find mathematicians talking about the pure mathematics of symmetry or the tricky phenomenon of turbulence, while a Newton Gateway event is exploring the role mathematics can play in healthcare.

The research programmes run by the INI can last for several months and are usually punctuated by shorter workshops focussing on a particular subfield of the area they cover. It's this length and breadth that differentiates them from the ordinary academic conferences mathematicians routinely attend. There is plenty of time to build working relationships and develop ideas, and a chance for people who work on different aspects of a field to come together.

With this concept the INI has been highly successful. A total of 27 Fields Medallists have passed through its doors (the Fields Medal is one of the highest accolades in mathematics) and many mathematical breakthroughs have been achieved or announced at the INI. A memorable example is Andrew Wiles presenting his proof of Fermat's last theorem in 1993, a result that had eluded mathematicians for centuries and which, according to eyewitnesses, electrified the room. During the COVID-19 pandemic, the INI and the Newton Gateway played a vital role in enabling epidemiologists and mathematicians to produce the science that was crucial for the country to navigate the crisis (you can read about the work of epidemiologists who benefited from this effort here). More generally, many of the advances the INI nurtures have applications in science and technology, now and in the future. 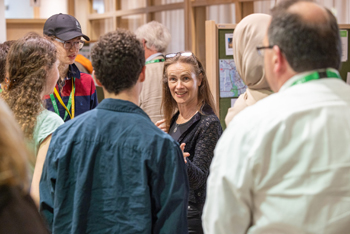 Deputy Director Christie Marr talking to students from a local school at the INI birthday celebration.

The demand for INI research programmes is higher than ever, Ewan Kirk, Chairman of the INI Management Committee, said at the birthday celebration. The INI has recently increased the number of research programmes being held in parallel, spreading out into a neighbouring institute, and is planning to extend its physical space in the next few years. Deputy Director Christie Marr talked about the INI's efforts to make programmes accessible to as many people as possible: to help those who cannot easily stay away from their usual activities there are fellowships available for early career researchers, people from underrepresented groups, and those with caring responsibilities. 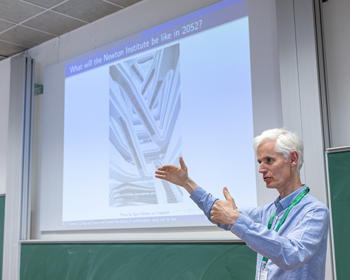 Mathematician Tim Gowers talking about the future of mathematics at the INI birthday celebration.

The INI's birthday celebration included an afternoon of lectures in front of invited guests including a group of local school students. Participants of some of the current research programmes presented their work, while the famous mathematician and Fields Medallist Tim Gowers talked about the future of mathematics. According to Gowers' (admittedly slightly scary) vision, computers will one day be able to replace mathematicians, not just crunching the numbers, but coming up with mathematical proofs just as elegant as the ones that humans have been producing for thousands of years. Whether this will really be the case, and what it would mean for mathematics and mathematicians, was hotly discussed over drinks after the talks (you can find out more about this topic here).

The afternoon programme was followed by a BBQ where we were very happy to raise a glass — to the INI and the Newton Gateway, to all the staff who make things happen, and to mathematics as a whole. We have been lucky to work with the INI since the beginning of 2021, bringing the research that is being done there to a wider audience. And although the INI's activities were moved online while pandemic restrictions were in place, participants' enthusiasm became apparent even over zoom. You can find all the content we have produced as part of this collaboration here.

A group photo of the INI birthday celebration. From left to right at the front: former INI Director David Abrahams, mathematicians Caroline Series and Valerie Isham who received honorary fellowships at the event, and Ewan Kirk, Chairman of the INI Management Committee.