Last month the LHCb experiment at the Large Hadron Collider made an observation that has thrilled particle physicists: it saw particles behave in way that may not fit with standard theory. The data supports physicists' suspicion that there could be more fundamental particles out there than suggested by their theory, and may even shed light on a major mystery posed by the recently-discovered Higgs boson. 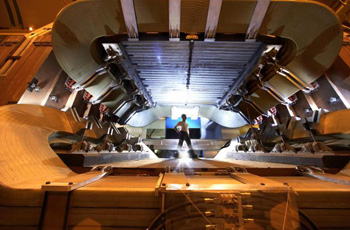 The theory that describes the fundamental building blocks of nature is called the standard model of particle physics. Constructed back in the 1970s, it's proved amazingly accurate when tested in experiments, such as the LHC. Yet, physicists know that there are things out there in nature that the standard model can't explain.

The LHCb experiment probed the decay of composite particles called B mesons into another composite particle called K* ("K star") and two muons, which are heavier versions of electrons (they write B → K*mumu for that decay). Analysis of the rate of decay shows a significant deviation from what the standard model would predict. Physicists had already seen this anomaly, as they call it, back in 2013, but they needed the new observation to confirm it.

What's important, though, isn't the anomaly on its own. Particle physics is full of uncertainty. The B → K*mumu decay involves the strong nuclear force, which the standard model does indeed describe. The problem is, however, that while the theory for the strong force exists, it doesn't allow you to make accurate calculations. Therefore, many predictions of processes involving that force, like the B → K*mumu decay, come with an error whose size can be hard to estimate. The question then is whether the deviation from the prediction of the standard model occurred because the prediction was inaccurate, or because there is really something the standard model can't explain. (See here to find out more about the strong force and the difficulties it poses.) 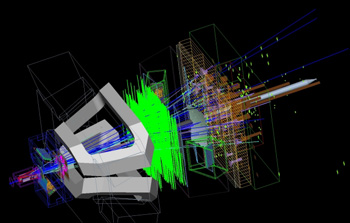 Representation of a particle decay at the LHCb.

"Physicists have done a lot of work analysing this, and it seems unlikely that errors to do with the strong force could explain the whole effect," explains Sophie Renner, who researches physics beyond the standard model at the University of Cambridge. "But there is still debate and it's important to be cautious."

There is still another type of uncertainty because the theory that underlies the standard model, quantum mechanics, is inherently probabilistic. Unlike classical physics, which tells you exactly how a system, such as two colliding billiard balls, is going to behave, quantum mechanics only gives you the probability that it will behave in any of a number of possible ways (see here to find out more). To make useful predictions, you need to know what those probabilities are for your particular system. Luckily, this problem can be beaten with statistics: observe the same process many, many times and the frequency of different outcomes will give you a good grip on the probabilities involved and the properties of a system. 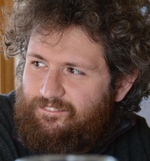 The interesting point is that both the B → K*mumu anomaly and the anomaly observed in 2014 can be explained by theoretical mechanisms which involve particles that are not part of the standard model: either a particle called Z' ("Z prime") or a particle called a leptoquark. "There's been a theoretical effort to see if [both anomalies] can be explained by the same effect. And it seems that they can," says Renner. "In particle physics you often get anomalous data," explains Marco Nardecchia, also an expert on physics beyond the standard model at the University of Cambridge. "Usually the explanation is that the strong interaction effects aren't properly under control [in the calculations]. But now we have two anomalies, one of them being very clean. This could really mean that there is some new physics here." 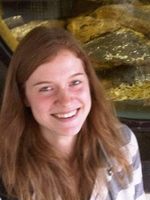 There is also another beautiful aspect to this story. Physicists didn't dream up the two new particles just to explain the two anomalies, rather they are already parts of other theories. The leptoquark, for example, is linked to something called the hierarchy problem, which involves the Higgs boson. Loosely speaking, the problem is that the Higgs boson that was observed at the LHC in 2012 is a lot lighter than theoretical considerations would suggest. It turns out that one explanation for this mismatch between experiment and theory is that the Higgs is not actually a fundamental particle in its own right, but made up of other particles.

"In our work [with Nardecchia and Gripaios] we thought about the leptoquark and whether it could fit into a bigger theory," explains Renner. "So we put it into a composite Higgs theory. In those theories you sometimes expect extra particles [such as the leptoquark] and you also get a nice prediction for [how those particles behave]. We found that a leptoquark coming from a composite Higgs theory could explain [aspects of the observed anomalies]." It seems that different aspects of the particle puzzle might be converging, and that's promising.

"The whole physics community believes that there is new physics beyond the standard model," says Nardecchia. A prime example is a mysterious substance called dark matter, which we know from observations exists, but which hasn't been observed. "Among all the elementary particles in the standard model there is no particle [that can explain dark matter]. The interesting question for particle physicists is whether there is something new at the [energy scale we can probe in particle colliders]. Without that the [question of new physics] remains a bit metaphysical — there's something there but you can never probe it. I think [the two anomalies] could be a hint that something new can show up in a collider."

"We need an update of these measurements with new data," says Renner. "If these new particles exist, then they should produce effects in other processes. You can measure those and see if there is anything going on there." So we'll have to be patient for a little while longer.

The Justified Ancients of

The Justified Ancients of K*mumu? Arf.