New windows on the Universe

This article is partly based on a lecture by Nobel laureate Kip Thorne and an interview with Gabriela González. You can see both below.

In September 2015 the LIGO detector observed a gravitational wave for the very first time. The wave was caused by the collision and merger of two black holes around 1.3 billion light years away, which sent gravitational waves ringing out across spacetime at the speed of light. The observation was a milestone in the history of physics. It even made international headlines at the time. But it was only the beginning of a golden age of gravitational wave astronomy. So what does the future hold?

In just two years the advanced stage of the LIGO detector will be up and running, and scientists expect to see a few black hole mergers per week. Advanced LIGO will be joined by other gravitational wave detectors across the world including advanced VIRGO in Italy (to be launched later this year), another LIGO detector in India, and KAGRA in Japan. This network of detectors will be particularly helpful in accurately locating the sources of gravitational waves by seeing when they arrive at different places on Earth. 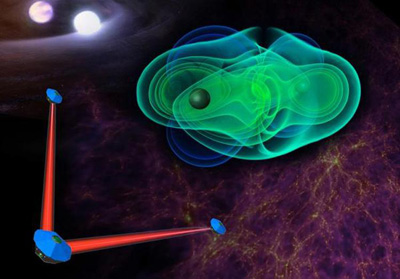 Follow-up projects to LIGO are also planned. The Cosmic Explorer, estimated to launch in 2030, will have 40km long arms and see every black hole merger in the Universe involving black holes whose mass is less than 1000 times that of the Sun. And there are plans to move into space. LISA, the Laser Interferometer Space Antenna, due to launch in 2034, will consist of three separate spacecraft forming an interferometer with arms at least one million kilometres long. LISA will be exquisitely sensitive both due to its size and the removal of Earth-based noise.

On top of that, there are ways of detecting gravitational waves that don't involve laser interferometers. One involves celestial objects called pulsars: neutron stars that emit beams of radiation just like lighthouses do. Because the pulsars are spinning, the beams arrive on Earth at very regular time intervals. A gravitational wave sweeping across the Earth not only distorts space but also time, and this effect can be detected in a change of ticking rates of pulsars measured on Earth.

Finally, there is the cosmic microwave background (CMB) — the earliest light that can be seen in the Universe, which comes from a time just after the Big Bang. Gravitational waves emitted at the birth of the Universe would have left their fingerprints in the CMB radiation (see below for more), and careful analysis of the CMB should reveal those prints.

Between them, the four approaches, Earth-based detectors, LISA, pulsar timing arrays and fingerprints in the CMB should open up four windows on gravitational waves. Just like the kind of waves we are used to, a gravitational wave has a period — the time it takes for the wave to repeat. LIGO can pick up waves with periods in the realm of milliseconds, LISA will manage periods of minutes to hours, pulsar timing arrays will deal with years to decades, and the CMB can pick up periods of billions of years. There's a good chance that all these four windows will be opened within the next twenty years or so — gravitational waves, there's nowhere to hide.

But why do we even want to detect all those gravitational waves? The answer is that they will act as a sort of additional sense with which to explore the Universe. In ordinary life we explore much of the world around us through sight and sound. Both of these involve waves: light, that is, electromagnetic radiation, and sound waves. In a similar way gravitational waves can tell us a lot about the objects and events that caused them. 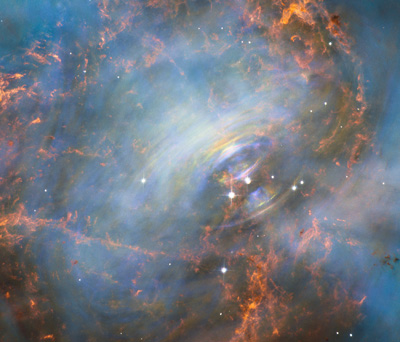 Neutron star say cheese: This image from the Hubble space telescope shows the very heart of the Crab Nebula including the central neutron star — it is the rightmost of the two bright stars near the centre of this image. Image: NASA, ESA.

To really understand the world around us, it's best to look and listen. The same goes for understanding the Universe. One thing physicists are hoping to do soon is to observe gravitational waves caused by the collision and merger of two neutron stars. "A merger of neutron stars will also produce electromagnetic waves; X-rays and gamma rays that can be seen by telescopes" says Gabriela González, Professor of Physics and Astronomy at Louisiana State University and former Spokesperson of the LIGO Scientific Collaboration. "The different signals are produced by different features of the system: the gravitational waves by the motion of the masses, the electromagnetic waves by electrons. [By observing them both] you can tell what everything [about the neutron stars] is doing."

This multi-messenger astronomy, as it's called, can tell us a number of things about neutron stars: whether they form a black hole or another type of star when they merge, for example, or how matter within a neutron star is arranged. The same goes for any other event that causes both electromagnetic radiation and gravitational waves. Having more than one tool to explore it will give us a better picture.

But the big players in the area remain black holes. Until gravitational waves coming from the mergers of black holes were detected, physicists weren't even sure black holes really existed. They were predicted by Einstein's general theory of relativity, but there was only indirect evidence for them. And even now, there is still much to learn about them.

"There are many things we would like to find out," says Chris Moore a physicist at the University of Cambridge. "Are heavy black holes more common than light black holes? Does the number of black hole mergers change as the Universe gets older?" A catalogue of gravitational wave detections will help answer these questions. In fact, two of the three detections made so far involve black holes that are more massive than was expected, suggesting the population of massive black holes might be larger than was at first thought.

But it's not all about size. There are other features of black holes that come out of the theory, but which we haven't so far been able to check in reality. A very nice example involves their surprising lack of complexity. A body like our Earth is hugely complex: it has an atmosphere, mountains and oceans, vegetation, animals and people. All the world's libraries and the internet taken together don't contain a complete description of it. Now imagine compressing the Earth into a small volume of space so that it turns into a black hole. Then that black hole would be described by just two pieces of information: its mass and the rate at which it is spinning. At least that's what the theory suggests, as people like Stephen Hawking have shown. 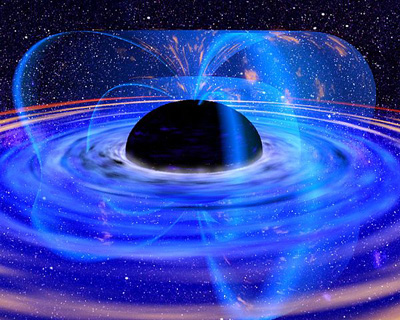 This is an artist's impression of a black hole. Image: NASA.

The idea that black holes are so staggeringly simple has become known as the no hair hypothesis: the black holes we find in nature are shorn of all complexity and can be described only by their mass and spin. They are bald.

The hypothesis can be explored using gravitational waves. If black holes have no hair, then the curvature of spacetime that comes with them is only determined by their masses and spins. "LISA will be able to study gigantic black holes that weigh millions of times of what the Sun weights," says Kip Thorne, one of the main players in gravitational wave theory and recipient of the 2017 Nobel Prize in Physics (see the video below).

The birth of the Universe

Gravitational waves, however, are different. "Gravitational waves are the only form of radiation that's so penetrating that it could be produced in the Big Bang explosion itself, in the so-called Planck era, and travelled almost unscathed by absorption, re-emission and scattering by matter in the intervening time," says Thorne. Gravitational waves can help us glimpse the very first moments of the Universe, a time at which accepted physical theories break down. Nobody knows what really happened back then.

What exactly those primordial gravitational waves will tell us is any physicist's educated guess. A particularly exciting prospect concerns the birth of the fundamental forces of nature. In another triumph of theoretical physics, scientists in the 1960s devised a theory which said that two of those forces, the electromagnetic force and the weak nuclear force, were once one and the same and only split apart as the Universe cooled down from the Big Bang. The theory was confirmed by the discovery of particular kinds of particles in particle accelerators — the famous Higgs boson has a hand in this too (see here to find out more). Gravitational waves might tell us more about the moment the forces split, in the very first moments after the Big Bang. This might even give a tantalising hint towards one of physicists' greatest dreams: to develop a great unified theory that describes all forces in one unified mathematical framework.

But what would excite physicists most would be the discovery of something completely unexpected — whether it involves black holes, the Big Bang, or something entirely new. Thorne believes that gravitational waves will deliver. "At some point there will be some giant surprises," he says. "But I can't tell you when and I can't tell you what."

The article is partly based on Kip Thorne's Andrew Chamblin Memorial Lecture, given in Cambridge in May 2017, and an interview with Gabriela González conducted in Cambridge in June 2017. You can see both in the videos above.

Marianne Freiberger and Rachel Thomas are the editors of Plus.