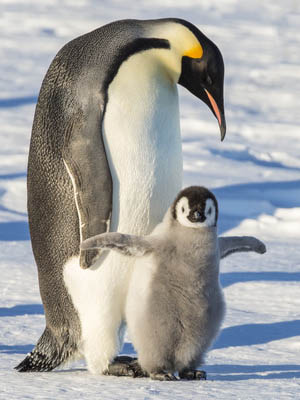 Why do penguins rotate their eggs?

Today, January 20th, is penguin awareness day. We can't let this important day pass without looking at some relevant maths. Penguins are well-known, and respected, for the incredible hardships some species endure in order to raise their chicks, including gruelling walks across Antarctic ice from nesting to feeding grounds. One of the lesser-known, and less challenging, parental duties of a penguin is to regularly rotate its unhatched eggs about their long axis.

For a very long time nobody knew why they do it, but it was important to find out: captive breeding programmes of penguins usually take the eggs away from the incubating bird and place them in an incubator. The mother will then lay more eggs to make up for the loss, so as long as the artificial incubators do their job well, there will be more chicks than the mother alone could produce. To be maximally efficient, the artificial incubators need to mimic natural conditions as closely as possible, including the rotation of the eggs. But without knowing why the eggs are being rotated it's hard to replicate the rotation effectively, and without the rotations the chicks won't hatch.

This is where maths comes in. Back in 2003 Bristol Zoo asked a study group of mathematicians at the Knowledge Transfer Network to investigate the penguin rotation problem by looking at the fluid dynamics within the egg. An initial idea was that the rotation ensures a uniform temperature of 37°C throughout the egg, but the study group's mathematical model, based on the equations of fluid dynamics, showed that the effects of rotation on temperature are minimal. They had more luck with a second theory: their model showed that the rotations produced the necessary mixing within the egg, ensuring that nutrients are distributed uniformly and waste is dispersed. The model described the turning and churning within the egg in detail and provided a theoretical basis to help with programming artificial incubators, not only for penguins but also for other species of bird. The group also recommended what type of further research would be necessary to improve their model.

It's safe to assume, therefore, that there are currently penguins alive on this planet that owe their existence directly to an application of fluid dynamics. Who would have thought! The Industrial Mathematics Knowledge Transfer Network aims to help businesses benefit from academic expertise in mathematics. You can find out more about its work, including on penguins, in this Plus article.

Permalink Submitted by johnsonkumar on January 28, 2017

I understand that eggs can be kept indefinitely in Antarctic research stations if they are periodically rotated.