CERN's Large Hadron Collider (LHC) is the world's largest laboratory experiment. It's a particle accelerator sitting about 100m below the Earth's surface, in a huge tunnel on the Franco-Swiss border. The experiment has smashed together tiny particles of matter in over a million billion collisions in the hope of finding answers to some deep questions about the way our Universe works. This article is about dark matter, but you can also read brief introductions to the particles involved, the theory behind the experiment and the triumphant discovery of the Higgs boson.

The LHC still has many mysteries to solve. One comes from the observations that galaxies and clusters of galaxies move in a weird way, which isn't consistent with the way we know gravity to act. It seems that they move about as if they were much heavier than they really are. One explanation for this puzzle is that ordinary matter is actually surrounded by something called dark matter, made up of unknown hypothetical particles that do not interact with light (it should really be called transparent matter). Thus, dark matter can't be seen with telescopes. It can only be observed indirectly by the gravitational pull it exerts on the ordinary visible matter. 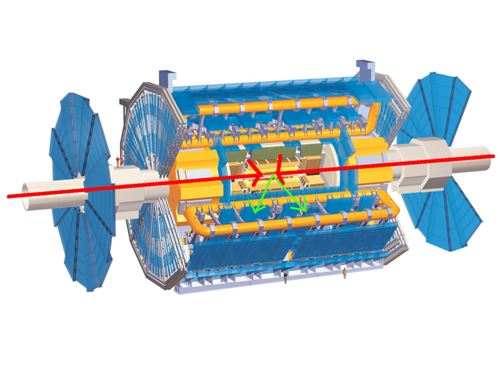 The ATLAS experiment at CERN. If the momenta of visible particles don't balance, then this could indicate that dark matter is being produced. Image © CERN.

There is a chance that dark matter particles could be jointly produced with ordinary visible matter in LHC collisions, although this possibility is much more speculative than the one of producing Higgs bosons. Dark matter interactions are too weak for the detector to find any trace of it. If dark matter exists, it will sneak out of the detector, carrying its momentum with it. Luckily, its presence can be inferred by looking at the rest of the visible particles in the event. The law of conservation of momentum means that momentum must balance. If it appears not to, we may infer that invisible particles have carried off the missing momentum. This would then be a signal that the LHC has been producing dark matter in its collisions. Such an event would send ripples through the physics community and spark further activity at the LHC to find out more about dark matter by looking at particular aspects of such collisions. The LHC started up again in June 2015 after two years of maintenance and is now running at higher energies. The data from these higher-energy runs may provide more direct clues to resolve the mystery of dark matter.

You can read a more about the hunt for dark matter at the LHC, or watch the video below.